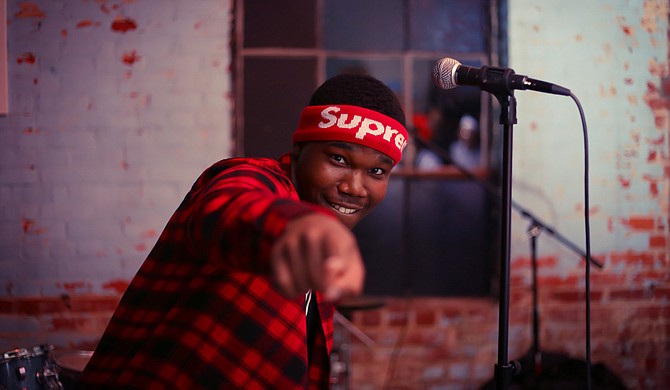 The opener, "The Shameful Turn Up," begins with a clip from the horrendous horror flick "Jason Lives: Friday the 13th, Part VI," even borrowing a slice of the movie's 1980s-cheese soundtrack before transitioning into a modern beat. It's a great indicator of what to expect from "Artistic Depression," which features plenty of pop-culture references, soulful backing tracks and Kincaid's raspy vocals. While in some hands the repetition of those elements could get tiring, Kincaid uses them to create variety and give the album a cohesive sound.

Listening through "Artistic Depression" reminded me of Kendrick Lamar's "To Pimp a Butterfly" and not just because both rappers have a bit of gravel in their voice and use the adage, "The blacker the berry, the sweeter the juice," in a song. Where Kincaid and Lamar met in my mind was the influence of funk, soul and R&B on their music, something that was awesome to hear from a local artist. Kincaid makes it clear that he has an appreciation for musicality, implementing clever instrumentation, dynamics and outright changes in a song's trajectory to make fully realized tracks.

While the album mostly features down-tempo tracks, the second song, "The Handshake," is a strong candidate for a radio single. One memorable section completes the song's chess/checkers motif with "kings" from black history, including Rodney King and Martin Luther King Jr. I could have done without guest artist Keem's line about raping hip-hop, but I won't fault Kincaid for that. When the song transfers to a soft, sweet-sounding verse, Kincaid uses the turn to juxtapose the first segment's message of strength and pride as a black man with the second half's feeling of pain from knowing that many things are stacked against people of color, and the result is praiseworthy.

The album introduces a weight-of-the-world intensity from its first moments, which become more tangible as it continues. The seventh track, "The Rope and Radio Theory," deals with a frustrating duality in music: Artists want to write songs about real issues, but they also want to write hits that appeal to the masses. Kincaid continues that idea in the closer, "The Return," which ends with a Devil-like character offering him women, wealth and fame if he signs on the dotted line and gives up his message. It's certainly a powerful moment and makes for a great end to the album, but it does feel slightly less impactful due to four of the songs that played before it—"Vaginal Vigilante," "The Queen," "The Lust" and "The Addiction."

For the sake of total honesty, I should say that I don't generally like songs about sex, as they tend to be a bit one-dimensional, but even I know those four songs are well-written for what they are. They're musically pleasing, as is most everything on "Artistic Depression," and "The Queen" has one of the album's most singable choruses. At the same time, when we've been dealing with issues like racial identity, it feels like a step backward to devote time to lines about not wearing a condom. However, I'm sure some listeners will gravitate more toward these songs, and there's nothing wrong with that.

With "Artistic Depression," Kincaid clearly created work that he's passionate about. From callback lines referencing earlier songs to smart delivery choices, as with feigning exhaustion on "The Search of Good Vibes," Kincaid wrote an honest-to-goodness album that feels thought out and intentional. With the darker themes, it's easy to focus on the second part of the title, but the more active word here is "artistic."