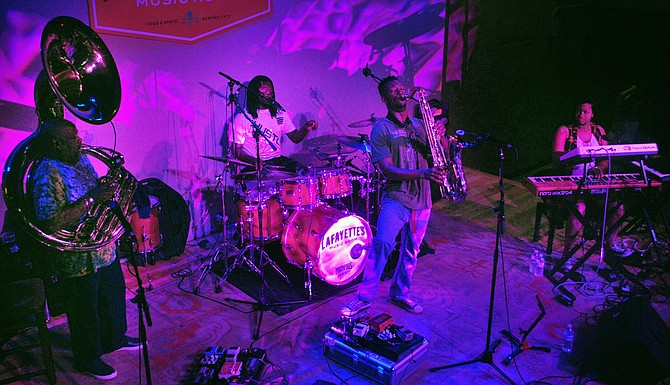 New Orleans' rich musical history has long been one of the signature facets of the Crescent City and a big draw for tourists. But for saxophonist Calvin Johnson, bandleader of funk and soul outfit Chapter:SOUL, that legacy is also an important part of his family heritage.

As a third-generation New Orleans musician, Johnson has been an entertainer since he was about 6 years old, and as an adult, he has performed, toured and recorded with many well-known acts such as Aaron Neville, Harry Connick Jr. and Big Sam's Funky Nation.

While he released two albums under his own name, his solo career took a backseat to his work as a sideman for nationally known artists until he decided to make the leap to bandleader in 2012.

Johnson says: "After being born and raised in the music, doing this, recording and traveling with everyone, one day, I woke up and said, 'Man, I really have something I want to say now, and being a sideman is not giving me that platform to say what I want to say musically.'"

He called his friend and mentor Kirk Joseph, the sousaphone player for the Dirty Dozen Brass Band. Music had always been a deep connector for the pair. Both grew up in large musical families, and their grandfathers, fathers and uncles played and toured together throughout their lives. Johnson told Joseph that he was considering starting his own band. "I think you should do it," he replied. "I think it's about that time."

Of course, Johnson says, the next question he asked was if Joseph would become the first member to join. He agreed, and later that day, the duo walked into Le Bon Temps Roule, a staple of the New Orleans club scene, and walked out with a weekly Sunday gig.

While Chapter:SOUL, which also features keyboardist Kashonda Bailey and drummer Terry Scott Jr., has certainly become a priority, every musician also regularly perform with other groups in between performances and tours. "It's New Orleans," Johnson explains with a laugh.

After one recent tour that ended in Texas, he says, he went to sleep in their hotel, and when he came down for call time the next morning, his band mates had already left on flights out of Dallas, headed for gigs in Europe and California.

"It's hard," Johnson says. "I'm not going to lie or BS it or glamorize or romanticize it to make it seem like a walk in the park. Everybody still plays with other people, and because of that, sometimes we still have conflicting schedules. We have schedules that make it razor thin, you know what I'm saying? ... When we're together, I cherish those moments that we're onstage. Once we leave the stage, everybody goes in their different paths, but that's also another beautiful thing about this band: Everybody has their own identity, as well as everyone having their own musical personality."

Performing with established acts has also been a learning experience, of course. Johnson says many of the successful artists that he has toured with over the years have helped shape his work ethic now that he's in the position of a bandleader. Whether it's seeing how Big Sam would deliver the same energy for an audience of one person or 1,000 or finding Connick Jr. still toiling away at new arrangements after a successful show at the White House, Johnson says he repeatedly discovered one thing: If Chapter:SOUL was going to reach that level, he would have to put in the work.