For the Love of Love Notez 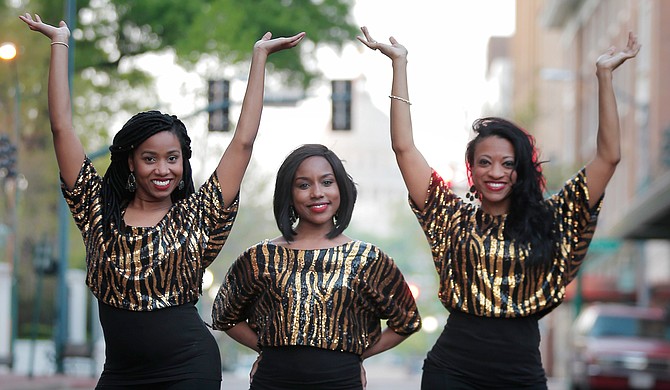 Over the past 23 years, followers of the local music scene have become well acquainted with the modern-day soul and R&B style of cover band Compozitionz, but for about six years, the group has also helped to steer the next movement in Jackson Motown in the form of the singing, dancing double-threat trio Love Notez.

"We're not just pleasant to the ears, as one would say, but we give a visual response to all our music, as well," vocalist Monica T. Shepherd says. "(We're) following the spirit of Motown-sound music, which is what we do most. We do all genres, but that is our favorite, the Motown era. If you look back at all the videos and pieces from that time—the Temptations, the Spinners, the OJays, all of them—they did a lot of energetic choreography with their performances."

The idea of adding a female singing group to Compozitionz's entertainment group as a sort of umbrella music company came long before Love Notez first formed in 2010. Vocalist Elisha Roberts was still a student at Provine High School when she first became a fan of Compozitionz, which led to her hearing about Love Notez six years later.

"To be honest, I knew what Motown was but never was really into it," Roberts says. "To hear that they were going to have some females singing Motown, I kind of downplayed it. I was like, 'I don't want to sing with older people.' I thought they were old. I didn't get it!"

Then, in 2010, Roberts decided to attend a vocal audition for the trio, where she met her future singing mates, Shepherd and former vocalist Seora Casper, and then became the third member of Love Notez.

The newest addition to the lineup, Amira Carey, was also hesitant to join the group at first, albeit for entirely different reasons. She found a flyer on Facebook advertising an opening with the trio in August 2014, shortly after Casper left to focus on her nursing-school studies, and at the time, Carey says, she just wanted to be singing with anyone.

As a self-professed owner of two left feet, Carey reconsidered trying out for Love Notez once she reached the line on the flyer that read, "You must be able to dance." She chose to give it a shot anyway, hoping that Shepherd and Roberts would let her dancing skills slide after hearing her sing. She was right, and in November 2014, Carey moved to Jackson as the new third "Love Note." Of course, with a little time and weekly two-hour rehearsals in full dresses and heels, her dance moves eventually made the cut, as well.

"She's been the perfect fit for the group," Shepherd says of Carey. "She's learned countless eight-counts, her voice is one to be reckoned with, and just the chemistry between her, Elisha and me is nothing short of amazing."

Chemistry certainly factors into the Love Notez mix. On the technical side, each vocalist is charged with selecting songs that fit their vocals, with Shepherd leaning toward high-octave tunes such as Natalie Cole's "This Will Be," Roberts singing powerhouse hits including Whitney Houston's "I Will Always Love You," and Carey taking on lower-range songs such as Gladys Knight's "Midnight Train to Georgia."

While Love Notez is currently looking for local restaurants and venues for regular performances, the trio stays busy with private events, providing Top-40 pop hits, country songs and disco anthems in addition to the Motown favorites. "And sometimes the bride just wants some hip-hop," Shepherd says with a laugh.