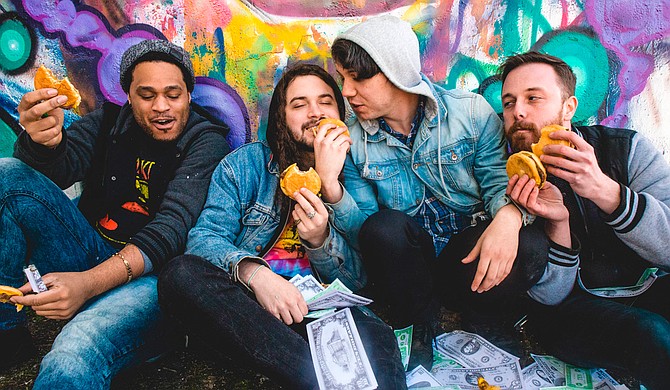 Light Beam Rider may hail from Corinth, Miss., but for many years, Jacksonians could frequently catch the group's freaked-out indie-rock sound at local venues such as Hal & Mal's and Ole Tavern. Fans had to wait almost four years for a follow-up to the band's debut album, "Mississippi," but Light Beam Rider is back on the road performing in support of its sophomore full-length, "A Place to Sleep Among the Creeps." The album hit stores Feb. 12 and marks the four-piece's first release since relocating to Nashville in 2013.

"We just felt like we needed a change," vocalist and rhythm guitarist Thomas Sweat says of the move. "I wanted to stay in Mississippi but just felt like we needed to go try a bigger market, try to meet more people and more business folks. It was the best idea I had at the time. It's been good. We moved here on a hope and a prayer, but we've got a solid manager, we're getting on really good shows here, and so many people hang out and tour from here, so we've met a bunch of cool bands. We're booking shows for them, they're booking shows for us, and it's just a really cool DIY thing of people helping each other."

Whereas Light Beam Rider wrote "Mississippi" little by little, which resulted in a set of songs that were "all over the place," Sweat says, "A Place to Sleep" is the band's attempt at a more intentional album that is cohesive yet varied. In part, he attributes the strides that Light Beam Rider has made to the Nashville intimidation factor.

"When you play here, everybody in the crowd is in a band," he says. "Everybody is a musician. So I guess that made us step our game up, and we spent a lot more time thinking of ideas and how we could make these recordings better. ... I mean, the bass player for Cage the Elephant lives five houses down from me, and they're one of the biggest rock bands in the states right now. It just gives you something you want to shoot for."

In keeping with the group's more unified approach on "A Place to Sleep," Light Beam Rider imbued the album with a B-movie horror aesthetic, spanning from the artwork to some of the song titles, including the energetic rock-and-roll opener "Crawling in My Brain." The idea for the theme came from Sweat's memories of a video store called Billy Joe's, where he would scan the covers of cheesy horror films as a kid.

For those who haven't caught the band live in recent years, "A Place to Sleep" will be an introduction to the band's newest members, drummer Avery Dilworth and guitarist Brad Savage. Initially, Sweat, bassist Jesse Sutton and former guitarist Daniel Swords decided to move to Music City while former drummer Ian Manus chose to stay in Mississippi.

Dilworth, a long-time friend of the members of Light Beam Rider, had been in Nashville playing for fellow Corinth native Maty Noyes but stayed behind when the pop vocalist moved to Los Angeles. Sweat approached Dilworth about playing, and the answer was an emphatic yes.

Savage came onboard after Swords' full-time job in Tennessee made it difficult to tour indefinitely, as his band mates planned to do. Swords remains a close friend, however, and even joined the band onstage for the first time in a year at a recent festival performance.

Fans have only had "A Place to Sleep" in their hands for a few months, but Light Beam Rider is already prepping for its next set of releases, which the musicians recorded at Dark Horse Recording Studio in January. Those who attend the band's April 1 show at Big Sleepy's can already anticipate hearing some of these new tracks, though the group has yet to decide on a release plan. Sweat says he hopes these recordings will be another step toward bringing Light Beam Rider to the next level.

"I used to want to be a good band, but now I want to be a great band," he says. "We called it 'Pearl Jam famous.' I'm shooting for the stars. Sometimes, I try to keep myself realistic, but other times, I just think, 'Man, if you aren't chasing your dream, then what the hell are you doing?'"

Light Beam Rider's "A Place to Sleep Among the Creeps" is available now on iTunes, Amazon and most other online retailers. For more information, visit lightbeamriderband.com.