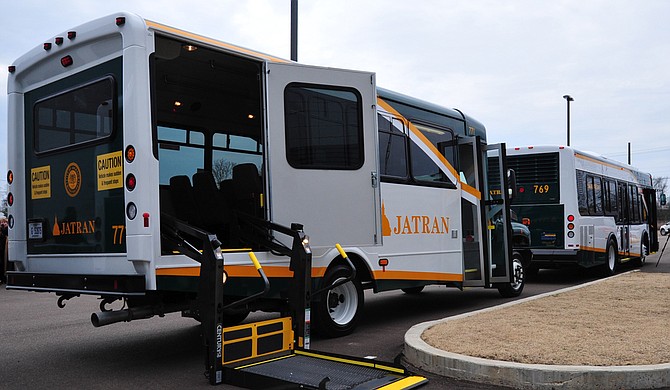 The City's Special Transportation Program under the City's Department of Human and Cultural Services is moving to JATRAN and will be called HandiLift. Scott Crawford/File Photo

A number of changes are coming to the capital city's mass-transit service, JATRAN, starting on Oct. 1, city officials say.

In August, the City of Jackson approved an operations contract for JATRAN with U.K.-based National Express Transit Services. A committee, which included JATRAN riders, recommended the city go with the offer from National Express for approximately $4.5 million, officials said at the time. John Andoh, the city's transportation planning and transit services manager, said the move would save the city $2 million in the upcoming fiscal year.

The three-year contract requires the city to pay a monthly fixed fee to the operator plus an hourly rate. Andoh said the city's legal department is considering a request for proposals for advertising on JATRAN buses, benches and shelters.

Previously, the city had a management contract. Under that agreement, the city would pay for any cost overruns. With an operations agreement, which does not include purchasing new equipment, National Express would absorb any overruns.

The years-long construction on the JATRAN administrative offices is also nearing completion. The $6.8 million facility replaces the old municipal public transit office on Terry Road. The federal government provided the brunt of the funding, leaving Jackson to pay the remaining $743,000 qualifying match for the support.

Construction hit a snag in March 2013, when federal regulators discovered some of the components of the building were not American-made, which violated stipulations of the federal funding. City officials say a grand opening for the new building will be scheduled for later in the fall.

According to a City Hall press release, other changes include:

• The telephone number for JATRAN customer service, HandiLift reservations and cancellations, lost and found and to ride HandiLift as a senior is 601-952-1000.

• The City's Special Transportation Program under the City's Department of Human and Cultural Services is moving to JATRAN and will be called HandiLift. Seniors age 60 years or older interested in this service can simply call 601-960-0355 to register for the service. Upon registering, then seniors can call JATRAN at 601-952-1000 to start scheduling trips.

The service is expanded and will operate Monday-Friday from 5:45 a.m. to 7:45 p.m., and Saturday from 6:45 a.m. to 6:45 p.m., excluding holidays.  Trips eligible for a donation are travel to senior centers, beauty salons, barbers, medical appointments, pharmacy, bank, laundry, dry cleaning, donation stores and social security offices. Shopping trips on a donation basis only on Wednesday and Thursday.