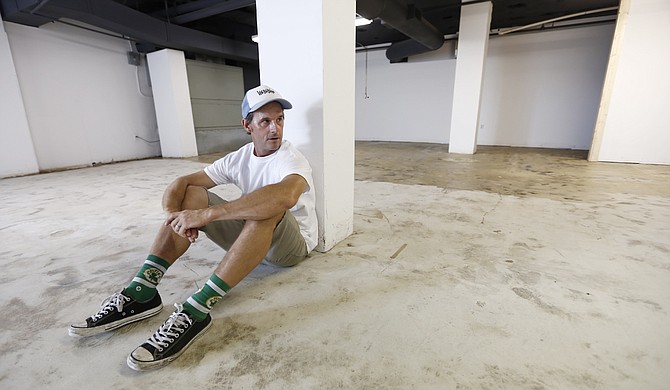 Ron Chane stands covered in sweat and soot in the basement of Fondren Corner, a space that housed his screen-printing business, Studio Chane, less than two weeks before. His T-shirt presses and flash dryer are now a few blocks away at 3026 N. State St., the space that formerly housed Mulberry Dreams.

"You should have seen me yesterday," Ron Chane says. "I look like I'm fit to go to prom compared to yesterday."

The move is nothing new for Chane. His screen-print shop and retail stores, Swell-O-Phonic and boutique Soma Wilai, hopscotched across the Fondren district many times over the years. This time is different, though.

"I was making the decision on moving out of the downstairs, and I just had an epiphany. I don't get epiphanies often," Chane says. "I had one six years ago when I decided to break my lease (next to Rainbow Co-Op) to move up the hill. ... It wasn't a good idea at first, but it was great in the longevity of things. So this was my second epiphany: I thought, 'You know what, let's keep the space down there.'"

After nearly $9,000 out of pocket in renovation, Chane is today unveiling The Wonder Lab, a collection of studio spaces that he hopes will be a springboard for Jackson creatives, whether they're experienced artists or newcomers making the leap from garage to gallery.

"You always wonder, 'What would life be like outside of this cubicle? What would it have been (like) if I followed my dreams and became this artist, designer, photographer, web designer or whatever?'" Chane says.

At $425 to $475 per month with discounts for prepaying three, six, nine or 12 months in advance, renting one of The Wonder Lab's seven 190-square-feet pods is a more tenable option for those looking to explore their artistic potential. At every Fondren's First Thursday, the space will house a special gallery show for its artists. Renters will also receive business consultation from Millsaps College and legal assistance from attorney Matthew McLaughlin. Chane is discussing the possibility of gallery advisement with another local institution as well.

Chane intends for the space to be an incubator for the next wave of the creative economy, artists that will one day bring their work to the world stage instead of casual hobbyists. He also wants artists who will make the most of the collaborative environment. To aid with the selection process, he typed up an application that touches on topics such as the candidate's goals, understanding of the local art scene and influences. Chane says one person even read the document and laughed at a question about the applicant's favorite bands.

"I said: 'Yeah, that's a loaded question. You better get that one right,'" he says. "If someone puts Justin Bieber on there, they may not be the artist we're looking for. Hint, hint: Smashing Pumpkins might just guarantee you a space."

Chane admits that it would be easier to sign seven tenants on a one-year lease and let that be the end of the transaction. But like other artists, he's searching for inspiration. He hopes The Wonder Lab will encourage something akin to the growth in Fondren about 10 years ago that helped launch names such as William Goodman, Ginger Williams, Jason Marlowe and Josh Hailey, all of whom have since reached a much larger audience.

"I want transition," Chane says. "I want a balance of people. I don't want four jewelry designers. In a perfect world, I'd have someone who does podcasts, someone who does web design, graphic design, photography, canvas art, pottery, furniture or anything to do with wood or repurposing. I want something where everybody kind of vibes off each other, where there's not a competitive sense. There's just that whole right-brain mindset."

Chane sees big things in the future, from trading residencies with other collaborative galleries across the state to eventual spin-off studios in other artist-infiltrated areas such as midtown, Belhaven and downtown. Once people see The Wonder Lab in full swing, he says, they'll understand what makes it so wonderful.

The Wonder Lab is located at 2906 N. State St., B-8. The open house is Thursday, Sept. 3, and the grand opening gallery show is Thursday, Oct. 1, which coincides with Fondren's First Thursday. For more information, visit chane.com. See photos of The Wonder Lab as Chane and his team put it together.