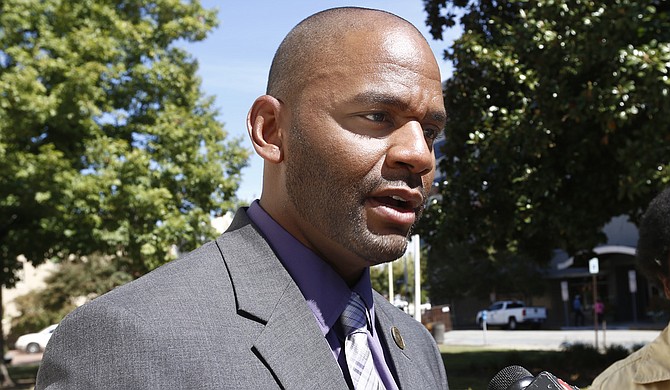 Ward 4 Councilman De'Keither Stamps said the City and County should get on the "same sheet of music" ahead of any possible polling-place changes. Photo by Imani Khayyam.

Officials from the City of Jackson and the Hinds County Election Commission say they want to be in accord ahead of possible changes to several polling places.

Connie Cochran, the elections commissioner from District 4, named three polling places in south Jackson that have requested a change. Two of those locations—Precinct 94 and 95—are churches: Jackson First Church on Highway 18 and Miracle Temple on Lakeshore Road. Another, Precinct 95, is Wahabi Shriners Temple on Interstate 55 South.

"Many of the precincts have been voting locations for many years. It would be nice to know that they would be permanent locations, but they are doing us a favor" by allowing the county to use them as polling stations for the day, Cochran told the Hinds County Board of Supervisors this morning.

Charlie Tillman, the recorder at the Wahabi Shriners Temple, said the group's board of directors informed the county after the August primary election that the building would not be available after the Nov. 3 election.

"To run the air conditioner in that building in hot weather can run in excess of $300 a day," Tillman told the Jackson Free Press, saying the county pays the organization somewhere between $100 and $250 for the day.

Cochran also said some changes are necessary to comply with provisions of the Americans with Disabilities Act. Ward 4 Councilman De'Keither Stamps said the last round of city redistricting, which took place in 2012, is also likely to result in voting-place changes.

"If we're both going to be making changes, we need to make the changes together," Stamps told the JFP.

Cochran, the only white member of the five-member election commission, came under fire in 2014 for not printing enough ballots for the county during the November general election, causing delays in some voting places. She addressed what she called the "impression of voter suppression."

She cannot unilaterally decide to close polling places, Cochran said. Any suggestion that she is running roughshod over her four African American colleagues in the majority is a "disservice" to her fellow commissioners, Cochran said.

District 1 Supervisor Robert Graham said he would welcome any move to remove polling places from active fire stations, which can disrupt voting when firefighters receive a call. Hinds County Board President Tony Greer, of District 4, echoed support for the possible changes.

"It's not about stripping someone of their right to vote so much as it's common sense," Greer told fellow supervisors this morning.