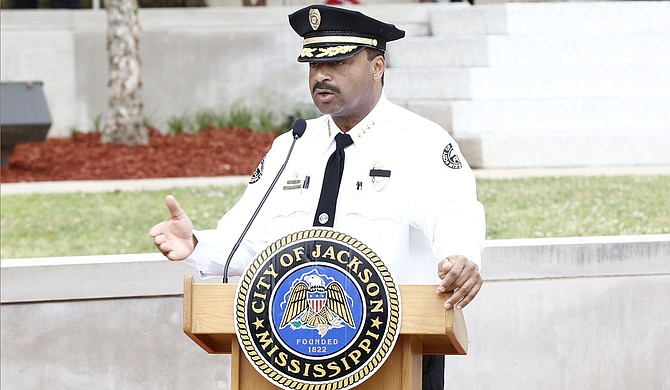 Jackson Police Chief Lee Vance said he would be open to speaking with lawmakers in the coming legislative session about the need for increased education funding as an extra crime-fighting tool. Photo by Imani Khayyam.

"I don't have the numbers in front of me, but usually, when you look at statistics like education (and) illiteracy, Mississippi is ... at the top of all bad categories and at the bottom of all good categories. We should all be wanting to improve those statuses and obviously, for me, funding is a part of that," Vance told the Jackson Free Press this morning.

Earlier this week, voters said no on amending the state constitution to require the Legislature to provide adequate funding for public schools. Although that effort, known as Initiative 42, was fueled largely by a desire to elevate Mississippi from the bottom of national education rankings, few people talked about the social benefits of improving education, including crime prevention.

In "Saving Futures, Saving Dollars: The Impact of Education on Crime Reduction and Earnings," which the Washington, D.C.-based Alliance for Excellent Education published in 2013, researchers wrote that a 5-percentage point increase in the national high-school graduation rate for male students alone would save the nation $19.7 billion annually in the costs of incarceration.

"Lower educational attainment is directly associated with increased arrest and incarceration rates, particularly in the case of males," the report's authors wrote. They cited a 2003 study that found "male inmates were about twice as likely as their counterparts in the general population to not have completed high school or its equivalent."

Vance supports congressional funding for early education and child-care assistance through programs such as Head Start and the federal Child Care and Development Block Grant program.

He added that state policymakers don't always make the connection, but as head of Mississippi's largest police department, Vance said he would be open to speaking with lawmakers in the coming legislative session about the need for increased education funding as an extra crime-fighting tool.

"Usually the squeakiest wheel gets the most grease in our society. This particular issue should squeak louder than any because the fact of the matter is that a lot of individuals who end up being criminals have eliminated themselves from being productive citizens through a lack of education," Vance said.

At JPD's weekly COMSTAT meeting to discuss crime trends, officers talked about arresting 9- and 10-year-old children and charging them with committing violent crimes.

"Obviously, that speaks to some family issues but getting individuals educated, making them more attractive for the workforce is obviously something that's a positive thing," Vance said.