A Closer Look at ‘Crossroads’ 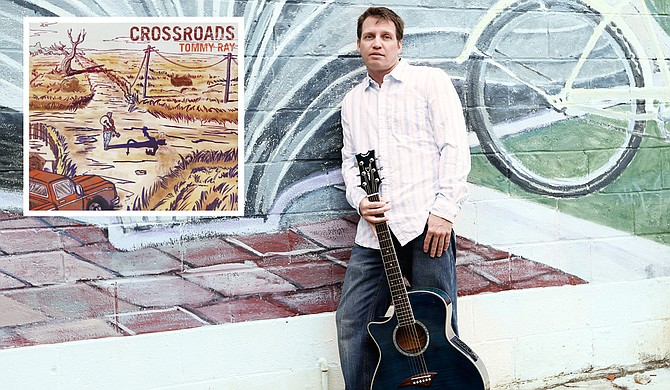 Brandon, Miss., singer-songwriter Tommy Ray and I have crossed paths on more than a few occasions, usually with me catching the tail end of his sets at Bonny Blair's Irish Pub open-mic nights. But his debut EP, "Crossroads," released March 21, was my first real interaction with his pop-infused country tunes. While the album passes over plenty of familiar territory, Ray's confident vocals and defined musical style, along with solid studio work, made for a pleasant journey.

As with a proper Mississippi introduction, the customary "Where are you from?" usually comes at the front end of a conversation. Ray keeps that rule of southern etiquette intact with the opening track, "Zama," named after the small town in Attala County where he grew up. The opener also foreshadows what listeners can expect from the five-song EP. Your personal feelings toward homegrown ballads will likely determine whether you'll stick with "Crossroads" throughout its 16-minute runtime.

Many of the songs are clearly a product of their location, complete with imagery of dirt roads, croaking frogs and cornbread. Deeper themes and lyrical nuances are mostly absent, but even a lyrics purist can see that isn't the point here. Where Ray excels is in knowledge of his voice. Like Glenn Campbell or Johnny Cash, Ray knows where his vocals are strongest and doesn't stray far from that spot. He also has the ability to sell the words he sings, a rare find on a first release.

Ray's husky singing is one of the more instantly likeable elements on "Crossroads." He doesn't drown listeners in a southern drawl like some country artists, which makes it an easier listen for fans of other genres. And you can certainly expect other genres here. Though Ray's music falls under the umbrella of country, his influences vary. Musically, "Zama" and "Angel" are along similar soft-rock lines, while the title track and "Passing of the Storm," steer into Jimmy Buffett territory. These make for an interesting contrast to the alternative-rock closer, "Escape."

It's easy to see that Ray wanted "Crossroads" to feel diverse, and through that, he avoids many of the major pitfalls that hit first-time releases, such as holding only one key, tempo or style on sustain over the course of an album. But closer observation reveals one area for Ray to be aware of his next time around: lyrical delivery.

Sure, words don't always matter, but the way in which an artist presents them makes a world of difference. Without digging too deep into music theory, every song on "Crossroads" is in 4/4 time signature, also called "common time," and almost every verse and chorus carries the same lyrical pattern: rest, quarter note, quarter note, quarter note. On paper, that doesn't sound like much, but in practice, it makes "Crossroads" feel monotonous at times. The good news is that a songwriter simply being aware of that problem is usually enough to fix it.

One of the EP's most commendable features is the quality that Ray and producer and multi-instrumentalist Jimm Mosher achieved at Hit Music Studios in Spencer, N.C. Every instrument on "Crossroads" has a crisp, natural sound, from the clean keys of "Zama" to the opening lead-guitar riff of the title track. It's impressive that these songs can fit right alongside hits from bands like The Eagles and Jackson Browne, feeling classic but not aged. The presence of organs and clean guitars goes a long way toward that, as well. At the same time, it was a wise decision to have his acoustic guitar and vocals front and center, since Ray is a solo artist at heart.

As far as first studio projects go, Ray's "Crossroads" is a win overall, indicating a few areas that need attention and offering plenty of solid ground to build on. It's like driving a vintage truck down a country road. There are some small scratches that need buffing out later and a few minor parts that could always use some tinkering, but for fans of the classics, "Crossroads" is a ride that might be worth taking.

For more information or to order a copy of "Crossroads," visit tommy-ray-music.com.