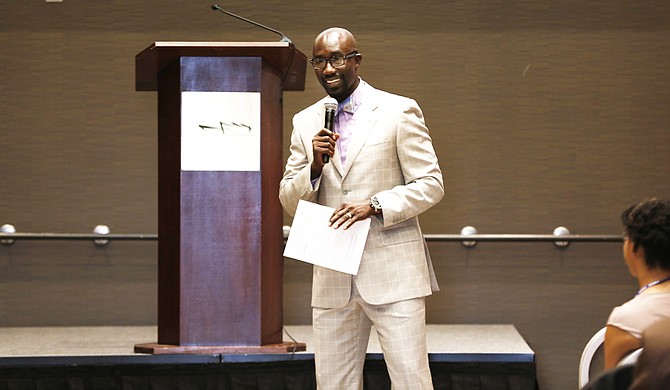 For several months, Mayor Tony Yarber has been on a crusade to redefine disaster so that civic emergencies, such as badly deteriorated bridges and water lines, qualify for state and federal assistance, similar to how acts of God mobilize government funding. Photo by Imani Khayyam.

Mayor Tony Yarber feels like he's between a rock and a hard place when it comes to addressing Jackson's failing infrastructure.

Yarber said taking action can mean facing public criticism about process and criticism for "jumping the gun" without weighing other options. Being reactive and waiting for an infrastructure emergency to take place would draw charges of failed leadership.

"The current rationale for emergencies is I've got to wait until the bridge falls," he told an audience at the Mississippi Conference of Black Mayors at the Jackson Convention Center this morning.

For several months, Yarber has been on a crusade to redefine disaster so that civic emergencies, such as badly deteriorated bridges and water lines, qualify for state and federal assistance, similar to how acts of God mobilize government funding. Yarber criticized the current system, under which the federal government gives money to state agencies, which then allocate it to regional agencies such as the Metropolitan Planning Organization and the Central Mississippi Planning and Development District.

"The real truth is that in many cases, for the people who are represented in this room—the black mayors—we cannot compete when we have to go through all those pass-throughs," Yarber said to rousing applause.

Yarber declared a civil emergency in March over concerns about water quality. In April, he asked the city council for a second proclamation, but the request was voted down.

Still, funding options remain, including a $2.5 million loan from the Mississippi State Department of Health that the city might not have to pay back if it meets certain requirements. Then there's the roughly $12 million from the 1-percent sales tax that remains unspent as the 10-member commission mulls the comprehensive infrastructure master plan that Jackson developed.

The commission charged with approving a plan to spend the sales tax money recently approved the city's first-year plan.

The city will use the money to repair streets and bridges and to address flooding and drainage issues around town. In the first year, only cash from the sales tax will be used on projects. The next phase of the plan could include borrowing, officials said.