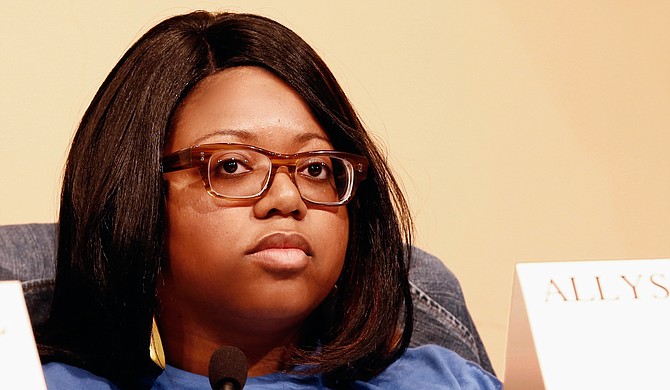 Allysha Patrick, who teaches at Capital City Alternative School, says she and other teachers are unclear about the role of Jackson Public Schools’ private police force when it comes to enforcing student discipline. Photo by Imani Khayyam.

On May 6, Jackson Public Schools seemed to be suffering from a split personality.

That morning, at Wingfield High School in south Jackson, education advocates and school officials hailed the school for lowering discipline problems by 94 percent between 2013 and 2014 without kicking students out of school. Meanwhile, JPS officials have also beamed about a decrease of 1,000 discipline incidents across the district between last year and the current one.

"Suspensions and expulsions don't work. They're coming back, and they're coming back behind," Willie Killins Jr., Wingfield's principal, told reporters seated at desks in a second-floor classroom, referring to the students who get kicked out.

A report titled "Classmates Not Cellmates" from the Mississippi-based group "Fight Crime: Invest in Kids" concluded that because kids who are not in school are more likely to interact with law enforcement, schools should come up with other ways to respond to less serious situations.

Willie Killins, the principal of Wingfield High School, says the school is seeing success in lowering its numbers of discipline issues, including suspensions and expulsions.

The afternoon painted a much different picture of discipline in JPS, however. Seated in the chairs that city council members usually occupy, members of the Jackson Federation of Teachers, a labor organization, unveiled their own report, titled "Reclaiming the Promise of Great Public Schools."

The report grew out of a questionnaire JFT circulated among teachers and staff members in JPS that included narratives of unnamed workers who say they were threatened, insulted and harassed by students. A survey revealed that two-thirds of the 1,021 people who responded said their work environment is out of control daily or weekly.

Todd Allen, who teaches history at Wingfield and is a member of JFT, believes JPS' reaction to the school-to-prison pipeline phenomenon, where kids who get pushed out of school end up in the criminal-justice system, was a "pendulum swing—from over-policing to under-policing."

"I just don't think there was a major revival that caused 90 percent of students to improve their behavior," Allen said during the city hall press conference.

As Allen pointed out, school discipline has come into sharp focus in Mississippi and around the nation in recent years.

In 2013, the Washington, D.C.-based Advanced Project said the state was "mired in an extreme school discipline crisis." In 2012, the U.S. Justice Department said Meridian was running one of the worst school-to-prison pipelines in the nation. Also, in 2012, JPS settled with students whom district officials regularly handcuffed as punishment for discipline issues.

On April 28, attorneys from the Advancement Project filed a complaint with the U.S. Department of Education against the DeSoto County School District, challenging discipline policies that  disproportionately affect African American students. While African Americans make up 32 percent of the population in DeSoto schools, they make up 55 percent of suspensions, proof, according to the complaint, that the district's policies "subject Black students to a different and more harmful standard of discipline" that echoes Jim Crow.

Similar actions have been taken across the nation. The negative press they've brought, combined with the high cost of fighting the legal battles and the rising cost of incarcerating people, ushered in new approaches to school discipline.

In January 2014, a letter from the U.S. Department of Education and the U.S. Department of Justice advised elementary and high schools on how to address discipline issues without discriminating on the bases of race, ethnicity or national origin. In JPS, 23 percent of all black students received at least one out-of-school suspension between 2011 and 2012, according to the Classmates Not Cellmates report. "Successful programs may incorporate a wide range of strategies to reduce misbehavior and maintain a safe learning environment, including conflict resolution, restorative practices, counseling, and structured systems of positive interventions," the letter states.

Thena Robinson-Mock, project director of the Advancement Project's Ending the Schoolhouse to Jailhouse Track Campaign, said restorative justice has caught fire in the past five years as data of its effectiveness have improved. "Initially, when people thought restorative practices, they had this image of something that seemed touchy feely, that felt too soft for dealing with some of the real issues and needs that students were bringing into the classroom," Robinson-Mock told the Jackson Free Press in a telephone interview. "What we know now is that there is a science to sitting down with young people, talking to all parties in a conflict and finding out what's going on. It's not just hand-holding—what it is, is the opposite of zero tolerance."

From the view of JFT members, JPS should have a zero-tolerance policy, at least when it comes to assault on staff members, and there should be strict adherence to district policies and state law for certain behaviors.

"Bullying, harassment, and violent behavior are prevalent," the JFT report's authors write. "This affects both students and school personnel, whom are subject to disrespectful language, behaviors, physical assault, sexual harassment, threats and intimidation. Inaction when these issues are reported is dehumanizing, and cruel. The health and safety of school personnel should be of critical importance to JPS. There must be consequences for students who demonstrate such behavior."

And the interventions that are in place are ineffective, the teachers said. JPS campus enforcement, an internal police force the district created in 2012—one of a number of school districts to do so—is a way to deal with discipline flare-ups without necessarily involving law enforcement right away.

"The role of campus enforcement is something we're not quite sure about," Allysha Patrick, who teaches at Capital City Alternative School, said. "We're not sure who does what."

The teachers say that another ineffective tool is the district's Positive Behaviors Interventions and Supports, or PBIS program, mandated in 2007. The idea behind PBIS is that all district personnel, including bus drivers, front-office support staff and top administrators, would receive training on how to reward students for good behavior with praise or prizes, but JPS has not implemented whole-school training.

While Killins and the Fight Crime: Invest in Kids group said PBIS is a key cog in reducing suspensions, they, along with the JFT teachers, agree that PBIS is far from perfect. In its survey, the JFT said only about half its respondents believe PBIS is effective—it works better with younger kids who are likely to behave for the promise of a candy treat—and half said they hadn't received any training in PBIS at all. "If this something we're supposed to be using, we need to be trained," Rachel Mathieu, a first-year teacher, said.

Funding is a challenge for cash-strapped districts such as JPS, but some cities have found creative ways around funding shortfalls. In Cincinnati, for example, police decided to use all the money it seized in drug raids on youth programs. School districts in Broward County, Fla., Oakland, Calif., Denver, Baltimore and Chicago entered into collaborative school-discipline agreements with groups such as the NAACP that recognize the racial-justice issues inherent in the school-to-prison pipeline and seeks to address them head on. Those districts have seen the number of suspensions decrease since adopting the agreements. "Because there's this real issue of teacher support and teachers feeling like there may not be other options, that's when we see a highly punitive discipline environment," Robinson-Mock said. "So because (teachers don't have) the resources or the proper training to deal with outbursts in class, suspensions become the only route."

She suggested that schools should also examine their security budgets to determine whether resources can be freed up and redirected to things like professional development. "We can't improve academics if we have a negative school climate where kids are getting kicked out, where it's highly punitive," she said.

Correction: A previous version of this story misstated that the Advancement Project filed a lawsuit against the DeSoto County School District. It is an administrative complaint with the U.S. Department of Education.