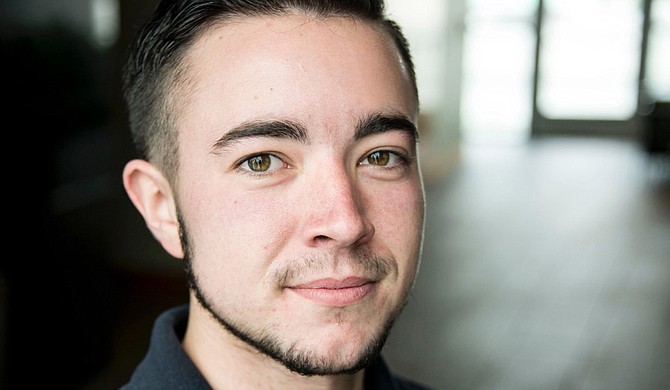 Tristan Broussard and his lawyers are locked in a legal battle over whether employers can force employees to dress based on a stereotype of birth gender. Photo courtesy Southern Poverty Law Center

Editor's note: On July 1, U.S. District Judge Henry Wingate ordered the case of transgender man Tristan Broussard, who sued his former employer, Tower Loan, back to Louisiana. The next hearing is set for July 14.

In early February 2013, Tristan Broussard, 21, applied to work at the Lake Charles, La., branch of Tower Loan, a private finance company based in Flowood, Miss., with more than 180 branches in the United States. In an interview, Broussard says he remembers Leah Sparks, the branch's manager, being particularly impressed with his qualifications and disposition.

He was cut out for the job.

On March 4, 2013, Broussard had his first day on the job. Like most first days, he spent a good portion of his day filling out paperwork for Sparks. He had to read employee handbooks and sign contracts and W-2s. And like most jobs, he had to provide a valid form of identification. Broussard handed over his driver's license. When Sparks noticed that Broussard's driver's license listed his sex as female, she asked Broussard about it, he claims now. Broussard explained that he is a transgender man.

Tristan Broussard has known he was a male as long as he can remember. By the time he had applied for the job at Tower Loans, he had lived as a man, consistent with his male identity for a year and a half. Upon learning about the sex listed on Broussard's driver's license, Sparks notified Tower Loans corporate headquarters in Flowood.

When Morgan arrived, he asked for Broussard and Sparks to meet him in the back conference room. When Broussard entered the room, Morgan handed him a copy of the company's dress code. In the week he had been working, he had not received any complaints about his manner of dress or compliance with the dress code, he says. Morgan called the meeting because Broussard was not following the rules governing how female employees must dress.

Broussard did his best to explain that he lives and identifies as a male, but Morgan wouldn't budge, demanding that Broussard dress as a female in the office. With this dictum, he required Broussard to sign a statement: "I understand that my preference to act and dress as male, despite having been born a female, is not something that will be in compliance with Tower Loan's personnel policies. I have been advised as to the proper dress for females and also have been provided a copy of the female dress code."

Broussard refused. He explained that he couldn't agree to such a statement because he is male.

Broussard says that Sparks contacted him to apologize later that day. He says Sparks told him that she didn't know he was going to be fired—that she thought he was a good employee. When the Jackson Free Press reached out to Leah Sparks, she declined to comment.

On April 13, 2015, the National Center for Lesbian Rights, the Southern Poverty Law Center, Altshuler Berzon LLP, and Delaney & Robb filed suit against Tower Loan for discrimination on behalf of Broussard.

In May, lawyers representing Tower Loans requested that the case be moved to a court in Mississippi; that request is pending.

"I think at the core of this case is whether or not an employer can discriminate against an employee," said Amy Whelan, a senior staff attorney for the NCLR who is helping represent Broussard.

Whelan explained that they plan to show how Tower Loan, in the alleged discrimination against Broussard, is violating Title VII of the Civil Rights Act of 1964. Title VII prohibits "employment discrimination based on race, color, region, sex and national origin."

"(The law) clearly says that employers cannot discriminate against their employees based on sex," Whelan says.

"They told Tristan Broussard that they were firing him because he is transgender. ... Tower Loans thinks that Tristan should behave 'like a woman'—whatever that means, and they disregard the fact that he is a transgender man. That is completely based on sex and gender stereotypes."

When the Jackson Free Press reached out to Tower Loan's headquarters in Flowood for its side of the story, John Tucker, who introduced himself as Tower Loan's general counsel, said, "We don't comment on personnel or pending litigation."

Because there is still a question over which court will hear the case, Tower Loan's rebuttal against Broussard is not yet known. But Whelan seems confident, pointing to a 2011 case in Phoenix, Ariz., Mia Macy v. ATF, where a transgender woman won a case against the Bureau of Alcohol, Tobacco, Firearms and Explosives for denying her a promotion based on her sex.

"I think what is going to be important is that Tower Loan has taken a position already before the (Equal Employment Opportunity Commission), which is the organization that enforces Title VII, that title VII doesn't protect transgender workers," Whelan said.

"That position is contrary to many federal court decisions. It's even contrary to the two federal agencies that are tasked with enforcing Title VII."

Update: An earlier version of this story said that Broussard's lawyers requested the case be moved to Mississippi when, in fact, it was the lawyers representing Tower Loans that requested the change of location. We apologize for the error.