Farish Mess Lingers as JRA Tries to Move On 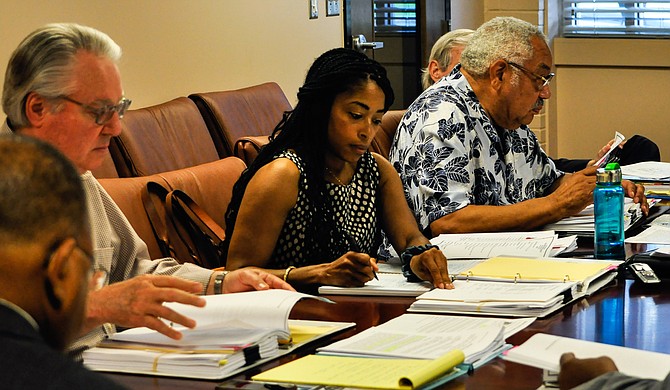 Jennifer Johnson (center), president of the Jackson Redevelopment Authority Board of Commissioners, wants the JRA to consider expanding its mission beyond downtown development to community housing.

To paraphrase Michael Corleone, just when the Jackson Redevelopment Authority thought it was out—of the morass over Farish Street—they get pulled back in.

The JRA, the quasi-governmental local agency that quietly puts together development deals backed by the city's credit, is considering expanding its purview beyond multimillion deals downtown but also wants to resolve the legal dispute over Farish Street and the proposed entertainment district.

"The authority wants to consider urban renewal development in ways that are other than commercial, be it market rate housing or mixed use or workforce housing," Jennifer Johnson, the JRA board president, told the Jackson Free Press.

For example, JRA is considering accepting a donation of several parcels of land in south Jackson near U.S. 18 and TV Road and another three lots in Presidential Hills, 42.5 acres all together. The authority took no action on whether to accept the donated land, but the proposal raised questions about the role and future of the authority.

"Is that a function of JRA?" asked Commissioner Beau Whittington at the July 22 board meeting.

But Johnson says other redevelopment authorities work on community housing developments and that looking beyond downtown, and having developers bring their ideas to JRA, is worth exploring for the some 80 properties the authority owns.

"That's always been a vision of mine," Johnson said. "We want to be able to serve the city in a greater capacity than just downtown or just commercial development."

In the meantime, Farish Street remains a thorn in the side of JRA and the citizens who want to see it returned to the glory of its heyday as the African American business district. Last week, Hinds County Chancery Judge Dewayne Thomas issued a ruling that nullifies liens he placed on buildings in the historic district.

"I'm disappointed, but it's not the end of the litigation," Watkins told the JFP.

The lien dispute started in 2013 when the JRA, which owns the property in the proposed entertainment district, terminated the master lease of the Farish Street Group, which consists of Watkins and several other partners. In turn, Watkins' development firm filed liens against the property, in which he says he invested $4.5 million of his own money. JRA argued that Watkins is not a construction company and could not place liens on public property.

Watkins plans to appeal the chancery court's decision. In an interview with the Jackson Free Press, Watkins said the lien issue is just a small part of his claims, including that JRA is in breach of contract and that JRA's attorneys from Jones Walker have negotiated in bad faith. The parties met for a confidential mediation session earlier this year that Watkins called a "failure" and said he now just wants "fair compensation" for his company's investment.

Mark Herbert, a Jones Walker attorney, said his firm isn't the issue and that lawyers take their direction from their clients, JRA.

"I don't know what to tell Mr. Watkins," Herbert said. "He has not come up with a realistic settlement proposal in any of the discussions that have gone on to date. They have been pure fantasy with his inability to recognize his legal position."

In the meantime, JRA is still working with the City of Jackson to resolve the issue of $1.5 million that the U.S. Department of Housing and Urban Development wants refunded because of Farish Street's lack of progress.

As a result, HUD barred the city, JRA and others involved in Farish Street development from working with HUD funds, a significant source of revenue for Jackson and other cities. The city was working out a three-year payment plan with HUD of $503,603 each year for three years, commencing 2016, but JRA offered to pay the $1.5 million on the city's behalf so that redevelopment could commence right away. The city mulls JRA's offer, Johnson said.