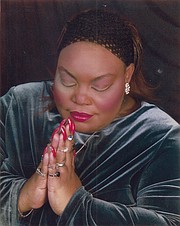 Born Patrice Gathright in Meridian in 1962, Moncell had a complex and rich musical career that began as early as age 4 when she started singing publically for church. She later attended Meridian Community College, where she studied under Dr. Bob Hermetz and earned attention for her work with a music group called The Variations.

As a classically trained vocalist, Moncell once sang with the New England Vocal Ensemble in its performance of "The Mozart Requiem" and with the Mississippi Symphony Orchestra for its performance of "Beethoven's Mass in C Major." She was also gifted at singing French, Italian and German arias, and was invited to sing spirituals at the Vatican in 1999.

Despite her successes in classical music, Moncell chose to pursue blues, soul and gospel. She provided background vocals for Cassandra Wilson and led Soop & Co. singles "Just Because You're a Lover" and "Take Me to the Mountain Top" in the '70s. She also performed with Jackson soul band The Bluz Boys as the lead female vocalist from 1985 to 2000, regularly performing at major local events such as Jubilee Jam.

"She was the Aretha Franklin of Jackson, and that's what we used her for," The Bluz Boys trumpet player Bob Davidson says. "She brought an awful lot to those events, (even if) there was a blazing-hot sun out. ... When she hit the stage, she delivered the goods, and she felt them. She had this huge, powerful voice."

In 2012, Moncell released her debut blues and soul album, "Woman Enough," with the help of friend and producer Vasti Jackson. That wasn't Jackson's first time working with Moncell, however. Over the 35 years that they'd known each other, Jackson collaborated with her on a number of projects. The two musicians toured together in the early 2000s when Moncell sang for Jackson's group, Roots Gospel Voices of Mississippi, performing in countries such as Spain, Switzerland, Germany and Italy.

He says when it comes to pure artistry, he would place Moncell above anything he'd ever heard.

While many people focus on the power of Moncell's voice, he says there was something more to be said of her melody and the emotion she could deliver, bringing just as much strength to a whisper as a sound-barrier-breaking note. When they were working together constructing a melody or arranging a song, the process was seamless.

"Of course, she had other aspects of her life that I wasn't involved in, but we were brother and sister to the core in the music, regardless of whatever else was going on," he says. "When it came time for the music, we were just bonded to every element that could glue and connect two artists."

In 2014, Moncell was honored with a mention on Mississippi Blues Trail marker No. 178, a tribute to R&B and soul stars from Meridian.

In an interview with Meridian's Channel 11 at the marker's dedication ceremony, she spoke about her love of performing for others.

"It makes me happy to see them happy," Moncell told Channel 11. "You know, someone may come in from a job, sit at a bar, get a drink, and be feeling down. And I can sing something that hits right there to the mark, and they have forgotten all about their problems."