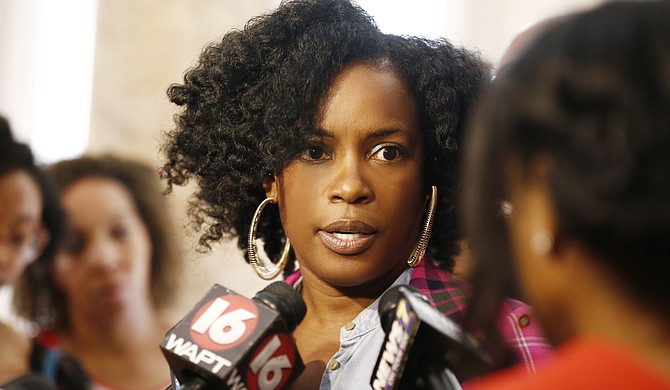 Aunjanue Ellis, who has appeared in “The Help,” “The Book of Negroes” and “NCIS LA,” calls for filmmakers to avoid her home state of Mississippi until the state flag is changed. She spoke at a June 29 flag rally at the Mississippi Capitol.

In the shadow of the Women's Confederate Memorial and spitting distance from a statute of former Mississippi Gov. and U.S. Sen. Theodore Bilbo, Mississippians issued a clarion call to change the state flag.

Long a lightning rod, the Mississippi state flag has come under fresh scrutiny in recent weeks following a mass killing of nine African Americans at a church in South Carolina. Although the leadership there is almost unanimously in favor of taking down the Rebel battle flag from the state Capitol, the symbol is literally part of the fabric of Mississippi's flag; changing it has met political resistance in the Magnolia State.

Nonetheless, the latest push against the flag seeks to apply economic and political pressure. For example, Aunjanue Ellis, an actress and Mississippi native, wanted to work on a film project in her home state, but now says she will film her movie in Louisiana instead.

Mississippi's leaders who oppose changing the flag point to a statewide ballot initiative in 2001 to keep the flag. However, proponents for a new flag say it's time to revisit the issue—and not by waiting on a referendum.

"Our state has been traumatized with that flag, especially for black people and that we have been ridiculed nationwide and internationally because of the flag," Ineva Pittman, a Civil Rights Movement veteran, told the Jackson Free Press.

State Rep. Chuck Espy, D-Clarksdale, said in his Delta hometown, issues of poverty and crime overshadow concerns about the flag, but he acknowledges that businesses may be reluctant to set up shop in Mississippi because so many people consider the flag offensive.

"Take the flag down and show that we are open for Mississippi," Espy said.

Chokwe A. Lumumba, an attorney and son of Jackson's late mayor, said the state flag does not represent all the challenges facing the state. However, in addressing a crowed on the Capitol steps, he added: "The flag represents the problem when it should represent the people."