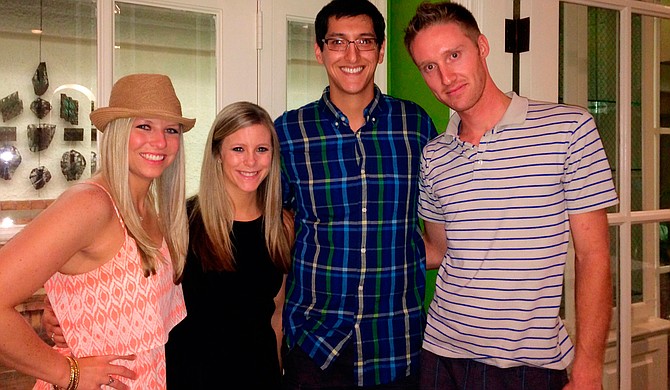 The party room in Julep restaurant in northeast Jackson was filled with relief Monday night as a group of about 30 people, new and old friends, gathered to celebrate four same-sex couples who were finally issued marriage licenses that morning.

"We all have the same anniversary now," Knol Aust said, toasting the other couples in the room. Aust had married his partner of 17 years, Duane Smith, that afternoon, June 29, 2015.

After a false start on Friday, the day the U.S. Supreme Court issued its landmark ruling, same-sex couples in Hinds County and 49 counties across the state were finally able to tie the knot on Monday, after Attorney General Jim Hood wrote to the county clerks promising no "adverse action" in response to issuing licenses. Hood's email to the clerks also said that regardless of the status of the Mississippi marriage lawsuit, Campaign for Southern Equality v. Bryant, in the 5th U.S. Circuit Court of Appeals, the U.S. Supreme Court ruling Friday is now the law of the land.

The case is currently stayed in the 5th Circuit but will be moving soon. On Monday, that court ordered both parties to file advisory letters by Wednesday, July 1, to "assist the court in rendering a full and appropriate final disposition."

The court ruling could go a lot of different ways from here. Simerly said the Campaign for Southern Equality has issued a brief asking the court to issue its final ruling and remove the stay. The defendants had not filed their documents by the time this issue went to print.

"Our legal team is going to push as hard and as fast as they can to make sure that it's legal in every single county in the state," Simerly said. "Because once the stay is lifted, there are no blocks left."

If the 5th Circuit chooses not to issue a ruling, they could technically kick the case back down to the district court, which Simerly said is possible but less likely. The ruling in the case could take up to 25 days, but Hood has asked for an expedited ruling.

"With legal stuff, it's hard to say anything with certainty in terms of timelines," she said.

Ultimately, the ruling does not affect Mississippi same-sex couples trying to get married now, because more than half the counties in the state are issuing licenses. Simerly said no couple in the state should have to drive more than an hour to get a license, and she expects more counties to come on board this week.

A legal marriage means all couples have immigration, adoption (depending on the agency), property inheritance, medical consent, state tax filing and Veterans Affairs benefit rights, recognized at the state and federal levels. "It's this real validation, and having it be nationwide is even more of a validation because it's not just a patchwork of laws that says your marriage is valid in Mississippi but not (somewhere else)," Simerly said.

Duane Smith (left) and Knol Aust (right) were married on June 29 after the Hinds County Courthouse began issuing licenses to same-sex couples in the state. Smith and Aust have been together for 17 years and have waited to be officially married until it was legal in Mississippi.

Hood gave his reasoning for his initial hesitancy on Friday in his Monday email. "[I]t might be wise to advise same-sex applicants that the validity of marriage licenses issued prior to the stay being legally lifted might be contested in any potential divorce action or in future estate proceedings," he wrote.

The appellees' counsel issued a motion to lift the stay on Friday afternoon after the U.S. Supreme Court legalized same-sex marriage.

Robert McDuff is an attorney at McDuff & Byrd, one of the firms representing the plaintiffs in the Campaign for Southern Equality v. Bryant case. "We filed it because of the confusion that had been generated," McDuff said. "The 5th Circuit would have done that anyway, but we wanted to go ahead and do it quickly in light of the fact that this was being used to delay the process."

The 5th Circuit had issued the stay originally, pending the outcome of the appeal, which is why they have the responsibility to lift the stay now.

The 5th Circuit has asked both parties to state what the proper order should be following the Obergefell v. Hodges decision. The court asked both Hood and Gov. Phil Bryant to address their positions on the motion filed by the plaintiffs on Friday, specifically "appellant Bryant should state the reasons, if any, for opposition."

The court asked advisories to state any reason the case should be returned to the district court or if the 5th Circuit could hand down a final ruling.

Texas, Louisiana and Alabama are also experiencing pushback, with some counties still not issuing marriage licenses. This time, however, Mississippi might not be last.

Six months ago, plaintiffs Joce Pritchett and her wife, Carla Webb, were encouraged after Judge Reeves struck down the state's ban on same-sex marriage. "That was the first time in my life that I had ever really, really thought there would be a chance that we could be married in Mississippi," Pritchett said.

"And look, six months later, everybody is getting married."