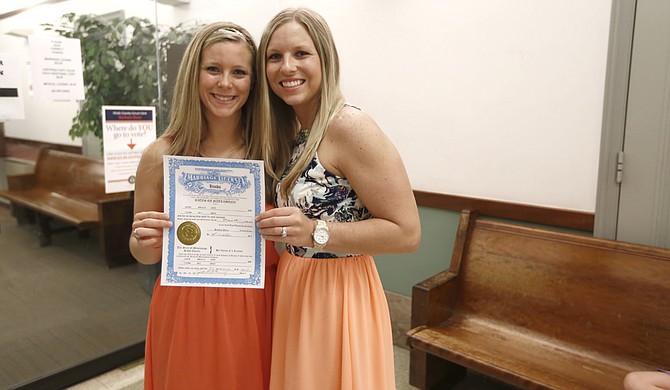 Tiffany Brosh (right) and Laurin Locke (left) pose with their marriage license at the Hinds County Courthouse on Monday after being denied their right to marry on Friday morning. Photo by Imani Khayyam.

Some Mississippi county clerks started issuing marriage licenses to all couples on Monday morning, after Attorney General Jim Hood wrote them promising no "adverse action" in response this morning.

Hood's email to clerks said that regardless of the status of the Mississippi marriage lawsuit, Campaign for Southern Equality v. Bryant, in the 5th U.S. Circuit Court of Appeals, the U.S. Supreme Court ruling Friday is now the law of the land. 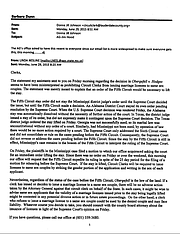 The attorney general promises that there will be "no adverse action" against any clerk who issues marriage licenses to same-sex couples, and he gave his reasoning for his initial hesitancy on Friday. "[I]t might be wise to advise same-sex applicants that the validity of marriage licenses issued prior to the stay being legally lifted might be contested in any potential divorce action or in future estate proceedings," he wrote.

The appellees' counsel issued a motion to lift the stay on Friday afternoon after the U.S. Supreme Court legalized same-sex marriage. Robert McDuff is an attorney at McDuff & Byrd, one of the firms representing the plaintiffs in the Campaign for Southern Equality v. Bryant case.

"We filed it because of the confusion that had been generated, (but) the Fifth Circuit would have done that anyway," McDuff said. "But we wanted to go ahead and do it quickly in light of the fact that this was being used to delay the process."

He said the attorney general's statement issued Friday explaining the delay puts "form over substance." McDuff said Hood had raised technicalities, and the circuit clerks typically follow his lead, in this case waiting for clarity after Friday's statement.

Hood's statement released today (see below) cleared up any confusion for Barbara Dunn, the Hinds county clerk who began issuing marriage licenses this morning to same-sex couples. It also clarified that this was his office's intention last week. "On Friday, the plaintiffs in the Mississippi case filed a motion to which our office acquiesced asking the court for an immediate order lifting the stay," Hood said in his letter to the clerks. "Since there was no order on Friday or over the weekend, this morning our office will request that the Fifth Circuit expedite its ruling in spite of the 25-day period for the filing of a motion for rehearing before the Supreme Court."

He added, "If a clerk has issued or decides to issue a marriage license to a same sex couple, there will be no adverse action taken by the Attorney General against that circuit clerk on behalf of the State." 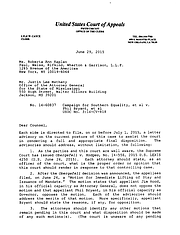 Update: The 5th U.S. Circuit Court of Appeals has issued a statement asking for both sides of the Campaign for Southern Equality v. Bryant case to file advisory letters on or before July 1 to "assist the court in rendering a full and appropriate final disposition." Each attorney must state what the proper order should be following the Obergefell v. Hodges decision. Both Hood and Gov. Phil Bryant have been asked to address their positions on the motion filed by the plaintiffs on Friday, specifically "appellant Bryant should state the reasons, if any, for opposition." Advisories were asked if there is any reason why the case should be returned to the district court or if a final ruling can be handed down by the 5th Circuit.