Straight, LGBT Teens Fight to Support Each Other 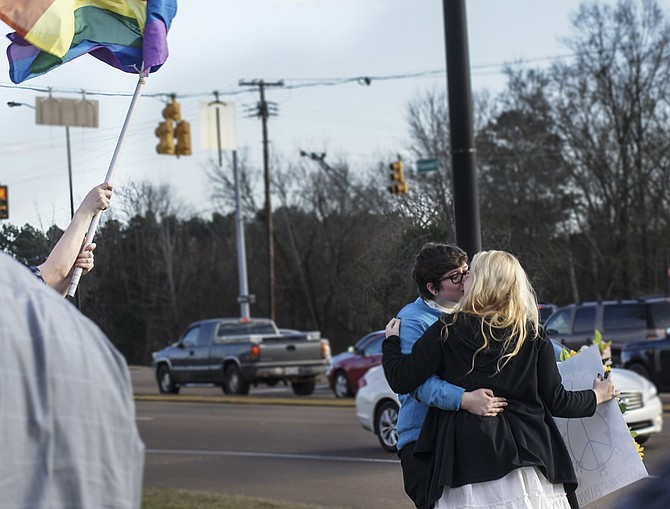 Presley McCord embraced her boyfriend, Lucas Bonham, who is transgender, on the grassy knoll outside the Rankin County School District offices while a rainbow flag blew in the wind behind them. They were there for a Jan. 20 demonstration that students, parents and friends organized in support of the Gay-Straight Alliance at Brandon High School.

McCord, who is a board member of the GSA, said she hopes the group helps to make a difference and improve the high school experience for LGBT students.

"He's the shining ray of the show, and I'm really proud of him," McCord said of Bonham. "But his life expectancy right now is 30 years, being transgender."

But on the highway that Tuesday, the students weren't just voicing the need for support groups in the LGBT community. They were protesting the Rankin County School Board's attempts to limit the formation of the GSA.

"Right now, in there, they're making us feel like we are not wanted," McCord said.

After some students asked the school to recognize the group as a school club, the school board changed its policies to require that students who want to form or join a club obtain a parent signature.

One of the protesters who identifies as bisexual, Kristin Hood, 20, said that while she knows many parents who would be accepting of their child, that is not the norm. Many parents, she notes, have been "raised to be very homophobic, very afraid of what they don't understand."

"For a lot of these kids, asking their parents for this permission would definitely create a tension. A lot of these parents maybe don't even know that their kids are gay or transgender or bisexual, anything," Hood said.

In December, a group of students approached BHS theater teacher Janice Weaver wanting to form a GSA at the school. She agreed to sponsor the club.

But on Jan. 14, the school board voted to approve the new rule. Superintendent Lynn Weathersby said in the meeting that the policy change is a way to legally limit groups like the GSA.

"I talked to (board attorney) Freddie (Harrell) and several administrators about what we could legally do to limit organizations like that on campus that we don't want to endorse and don't want," Weathersby said in the meeting, as The Clarion-Ledger reported.

Because the new policy requires all clubs to adhere to the new rule, constitutional law expert Matt Steffey said the GSA could have a harder time claiming a First Amendment violation. "If what the school wants to do is put a damper on controversial clubs, this is probably the most effective and perhaps the safest way to do it—by safest, I mean most defensible," Steffey said.

Steffey said it might denote progress in the LGBT-rights movement that at least the officials in Rankin County are addressing the law, rather than denying GSAs outright, as they might have done in the past.

But Charles Irvin, legal director of the American Civil Liberties Union of Mississippi, said the ACLU will monitor the district's application of the rule to make sure it is not targeting the GSA, as policies like this have in past cases. If it seems that schools are only requiring parent signatures for LGBT support groups, the ALCU will step in, Irvin said.

"We won't know what further actions we'll be able to take until we see the school district's new rule in action," Irvin said.

In its meeting, the Rankin County School Board discussed whether the involvement of sexual orientation in the group's topic might mean that the club would violate the school's abstinence-only policy.

Neither Weathersby or the principal of BHS, Buddy Bailey, returned phone calls. As this articles goes to press, the page on the RCSD website that would contain the school board members and meeting minutes, is unavailable.

Kelli Nichols, a teacher at Forest Hill High School, said the misconceptions about the club prove that the district officials are "obviously not educating themselves on what this club is."

In a letter that the American Civil Liberties Union wrote to the school district in response to the decision, the ACLU notes that decisions in past court cases have recognized that the focus of most GSA’s is not sex.

“The court also noted that assuming a GSA will discuss sex and other clubs will not unfairly singles out the GSA based on a stereotype,” the letter reads.

Federal court cases regarding GSAs in high schools date back to the 1990s, and the courts have sided with the GSAs in those cases, by saying, "'You have a right to form your club,'" Irvin explained.

Superintendent of Jackson Public Schools, Cedrick Gray, said he does not anticipate running into the issues regarding school clubs that RCSD currently faces.

"Our school board is very careful to make sure that our policies are not exclusive of any groups, but that they encompass all students and all walks of life," Gray said. "School is about kids, so that's what we try to make it."

Nichols, a lesbian, believes the establishment of clubs like the GSA are "fanning the flames" that already exist regarding attitudes toward the LGBT community in Rankin County. She used to teach in Rankin County and was given no explanation when she was not renewed. Her daughter, Karley, who attends BHS, was harassed in class the day of the protest, and the school took no measures to stop or punish the bullies, Nichols said.

But the importance of GSAs is not to be overlooked. Ashley Nelson, who is now 23 but used to attend Ridgeland High School, was bullied and even outed by her principal when she was a teenager. There was not a GSA at her high school, but she recognizes the difference it could have made.

"There's a lot of people that don't know how to cope with it, They think that there's something wrong with them, and there's not," Nelson said. "We just want to be treated like human beings."

Beyond the support the group can give to LGBT students, Nelson said GSAs can help straight students understand what LGBT students go through and help to build allies within the community.

Nichols said it's important for students to simply have an outlet to gather with like-minded people, "where they're safe and that they can talk to someone they trust, because they don't always have that with their teachers, counselors, administrators, coaches, preachers, whomever is in their community."

"I think if we could save one kid from depression or thoughts of suicide ... then it's worth it," Nichols said.

Lesley Priest, a mother of a child in Mississippi who carried the large rainbow flag during much of the protest, said she doesn't know if the new rule will stop the students from forming the GSA.

"I think they're a lot braver than Lynn Weathersby gives them credit for," she said.