Battlefield Park Fights for Its Reputation 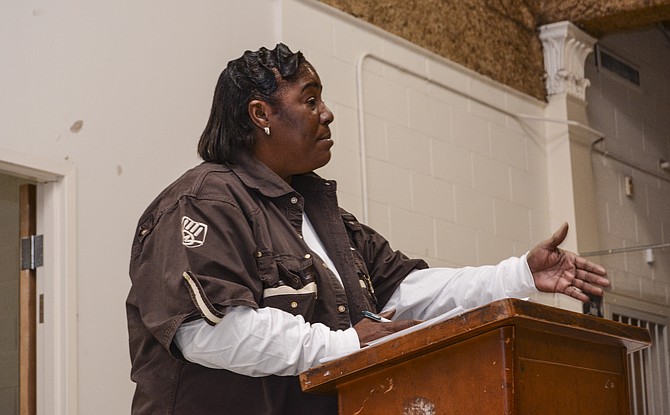 Willa Womack, president of the Battlefield Community Neighborhood Association Board, said residents are working hard to combat negative perceptions of their neighborhood, which has experienced a reduction in crime in the past year. Photo by Trip Burns.

Womack was referring to the case of Christal Summers, who was killed at a gas station on Terry Road, just south of Battlefield Park. Summers, 34, was also a hip-hop musician known as Battlefield Gucci. In fact "Battlefield" is a common moniker for capital-city area rappers. However, those associations with Battlefield Park and, by extension, the surrounding neighborhood doesn't sit well with residents.

In fact, were it not for the presence of a Jackson Free Press reporter and photographer, Womack might have been content to avoid talking about Summers' murder at all. The Battlefield meeting was sparsely attended, mostly by people outside the neighborhood faithful. A social-media push encouraging people to attend and match numbers that a Belhaven neighborhood meeting saw the previous week did not increase the turnout.

The packed Belhaven gathering, which Jackson Police Chief Lee Vance and Ward 7 Councilwoman Margaret Barrett-Simon attended, came in response to the murder of 69-year-old Carolyn Temple. Temple was attacked and shot on Jan. 12 and died more than a week later.

A suspect in Summers' shooting, Jonathan Kelly, has turned himself in on Jan. 23 to JPD, which said in a press release that the suspect and Summers had been involved in an altercation at the gas station where the shooting occurred. The release stated that Summers is believed to have pulled his gun first and then Kelly fired at him several times killing him. After Kelly turned himself in, police charged him for being a convicted felon in possession of a firearm.

Womack, the Battlefield Park president, told the Jackson Free Press that she believes it's unfair that their neighborhood is painted negatively when violence occurs anywhere in west Jackson, particularly given that Battlefield Field park residents are particularly active in crime prevention. Neighbors report that the sound of gunshots has become a rarity over the past year, since the neighborhood association starting working with Hinds County Sheriff Tyrone Lewis. Overall, calls for service have gone down dramatically, law-enforcement officials say.

At one point during the meeting, Womack said that she wasn't going to spend a lot of time talking about crime in the neighborhood because the people who live there are all too familiar with the problems.

Instead, the agenda included discussion of the group's application for nonprofit status with the Internal Revenue Service and the hiring of a volunteer grant writer to seek funds for a community house that would be wired for the Internet so people could use the computers to send job letters. The house would also enable people to "visit" loved ones jailed at the Raymond Detention Center, which recently suspended in-person visitation citing ongoing problems with the introduction of contraband at the beleaguered facility. Now, only video visits are allowed.

The neighborhood is also pursuing grants to help elderly residents with home repairs, but Battlefield realizes that it faces challenges because of its unique political geography. The majority African American neighborhood lies in Jackson's Ward 7, which includes Fondren, Belhaven, downtown and parts of south Jackson and is represented by Barrett-Simon.

And despite popular belief, their congressman is Republican U.S. Rep. Gregg Harper, not Congressman Bennie Thompson.

Womack, who also owns a printing business on Farish Street and helped revive the neighborhood association this past year, wants to launch a campaign to draw more financial support from government officials to Battlefield Park, which had been the subject of a proposal to rename it in honor of late Mayor Chokwe Lumumba.

The measure appeared to have enough support to pass, but the legislation's sponsor, former Ward 3 Councilwoman LaRita Cooper-Stokes, stepped down to become a county judge.