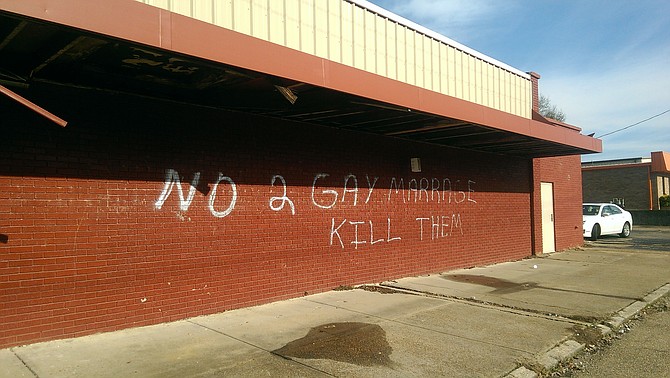 On the same day the U.S. Supreme Court decided to eventually rule on marriage-equality cases, Jackson's LGBT community is on edge after a message of hate is scrawled on an abandoned building.

Scrawled on the façade of the structure on West Capitol street near Poindexter Park is the message:

Rob Hill, the state director of the Human Rights Campaign of Mississippi, said a friend alerted him of the graffiti this afternoon.

"It’s a scary thing to have any kind of hate speech, but especially when it references killing or harming somebody in the community of which I am a part," Hill, who is gay, told the Jackson Free Press.

"It’s clear that no valid legal arguments exist to uphold bans on same-sex marriage. For that reason we are confident that the U.S. Supreme Court will affirm that same-sex couples have a fundamental right to marry under the U.S. Constitution," said Rev. Jasmine Beach-Ferrara, the executive director of the Campaign for Southern Equality, of the SCOTUS announcement in a press release.

As school buses whizzed down the one-way street, Hill said such messages are psychologically harmful to local citizens, including LGBT children and young people. The Capitol street graffiti comes just four months after similar messages were discovered in downtown Jackson's Smith Park. Hill could not speculate on whether the two incidents are related, but said the handwriting in each appears similar.

Unlike the Smith Park vandalism, in which phrases such as "Say no to gay marriage. Kill them gays" were chalked on sidewalks, today's defacement on Capitol Street used spray paint.

"I think that we’re a whole lot better than this in Mississippi," Hill said. "This message doesn’t echo what most Mississippians feel, but it's an obvious sign that we've got a whole lot of work to do in educating people about who LGBT people are."