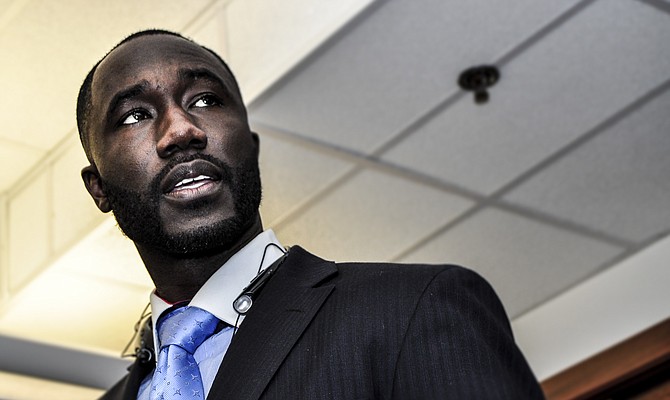 Mayor Tony Yarber has talked to top Republican leaders, who he says seem most amenable to helping with Jackson’s public-safety needs. Photo by Trip Burns.

It's tough to assess the City of Jackson's position going into the 2015 legislative session. In past years, despite rhetoric from lawmakers and city officials about opportunities to build consensus around issues, that Mississippi's largest city would get short shrift was about as certain as sweet potato pie at Christmas time.

That sense seemed heightened going into the last session. If the Republican leadership wouldn't budge for a relative moderate like Harvey Johnson Jr. or a one-time Republican darling such as Frank Melton, there was no way that the newly elected Mayor Chokwe Lumumba would get so much as a foot in the door.

But, as he had a knack for doing, Lumumba started to melt the ice and earn the trust of legislators before his untimely death in February. Legislators retreated in the face of uncertainty, and just about every bill that contained the phrase "city of Jackson" in its title met its doom.

Mayor Tony Yarber brings a youthful energy that hasn't been present in a long time. Plus, he has already proved that he can rally Republican support on some issues. (He even tried, unsuccessfully, to hire ultimate Republican insider, Hayes Dent, to lobby on the city's behalf).

For once, Jackson seems to have leadership in place that doesn't make Republicans who hold the purse strings nervous. And Yarber seems to know it based on the robust legislative agenda he has proposed and to which the city council has given its assent.

To Protect and Serve

"A lot of the asks hinge around funding and appropriations," Yarber said recently. "To prioritize, those asks that involve infrastructure investment are the things that we really need require not only the Hinds County delegation, but the state."

In fact, last session, several bills asking for public-safety assistance died without a full airing in committee, but the city did receive $500,000 for a crime study that was buried in the attorney general's budget.

Typically, the city asks for either a lump sum through a payment-in-lieu-of-tax arrangement whereby the state pays a nominal fee to make up for lost real estate taxes. This year, he wants to establish a special fund for municipal fire and emergency management, crime prevention as well as workforce development.

Yarber and other city officials believe state budget officials might be more receptive this year in the wake of fires at several prominent landmarks, including the state-owned Mississippi Agriculture and Forestry Museum and the Eudora Welty Commons, which is a privately owned but well-known events venue.

"Services from the city of Jackson are used all the time for state agencies and state-sponsored events," Yarber said.

There could be some traction on this front. Yarber says he has met with Speaker Philip Gunn, Lt. Gov. Tate Reeves and Gov. Phil Bryant, and all three top Republican leaders indicated an openness to what the mayor described as "how we can make something happen with our public-safety situation."

There Goes the Neighborhood

In talking to reporters, Yarber said while the Republican leaders are on board with making public-safety improvement, the city's requests for help making infrastructure upgrades could face an uphill climb in the state Legislature.

The city's goal is to seek a special improvement district near the Capitol that could involve asking the state to share the responsibility of maintaining or transferring ownership of infrastructure in the area. A separate agenda item would transfer to the state portions of surface and ground infrastructure near state-owned buildings for maintenance and upkeep.

In January 2014, the citizens agreed to a 1-percent tax on certain sales. The commission that will oversee the spending of the 1-percent sales tax, which Jackson citizens passed through a referendum in January, is close to completing the master plan that will guide how the money will be spent. The mayor serves on the commission and said he hopes that some projects can commence as early as the end of the first quarter in 2015. The city is also under a consent decree with the U.S. Environment Protection Agency to make roughly $400 million in improvements to its sewer system.

In addition, the city wants to establish a commission to study and provide strategies for tackling chronic poverty, and hopes to get state permission to create one or more special taxing districts that would benefit neighborhood associations.

A frequent complaint of Jacksonians is the presence of abandoned and dilapidated housing and unkempt properties. Under Yarber, code enforcement authority moved to the Jackson Police Department from the Planning Department, and the city streamlined how contracts are doled out to clean up problem properties.

Yarber said the city also wants more teeth to deal with derelict property owners because state law does not distinguish between chronic nuisance and nuisance properties.

"So what happens is that the chronic nuisance property gets the same advantage of process as the elderly lady whose husband passed away and hasn't had a chance to get the grass cut," Yarber told reporters.

The Jackson Zoo—which is largely supported by the city—and Livingston Park would receive a $1 million allocation under another legislative request. State Sen. Hillman Frazier, a Jackson Democrat, could carry some of the city's bills this year. Frazier, who chairs the Senate Housing Committee, says he intends to sponsor a bill to create a public-housing trust fund for first-time home buyers and others.

The funding mechanism Frazier proposes involves a so-called "pole tax," a per-patron assessment at gentlemen's clubs in the state.

The city is considering hiring Worth Thomas as its lobbyist for the upcoming session. During the last session, Thomas lobbied for the Jackson State University Development Foundation, Altria, AT&T and Mississippi Power Co. Synarus Green is the city's director of policy and intergovernmental affairs.