Vaccination Exemptions and Outbreaks by State 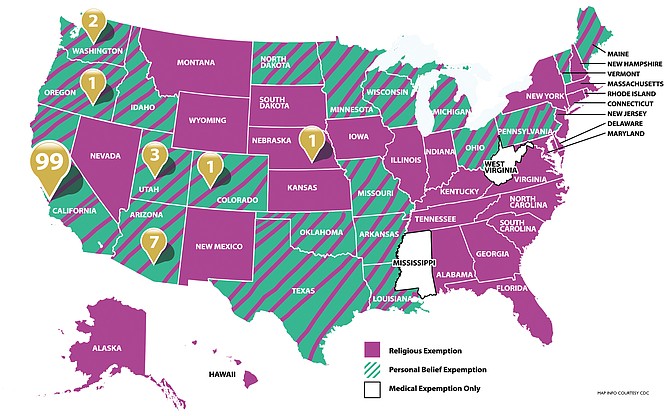 A measles outbreak originating at Disneyland in California has infected more than 120 people across 14 states since December. California allows vaccine exemptions to grant students who are not vaccinated entrance to public school for medical, religious and philosophical reasons, along with 19 other states.

The map to the left shows reported data from the Centers for Disease Control and Prevention website regarding the outbreak from Dec. 28 to Feb. 6 as well as the allowed exemptions in each state.

The CDC reports that the outbreak likely started from a traveler who had been infected with measles overseas, but they have not identified a source.

The Mississippi Supreme Court found in 1979 that parents could not demand their unvaccinated child be admitted into public school due to their religion, effectively outlawing a religious vaccine exemption in the state.

Groups like the Mississippi Parents for Vaccine Rights are lobbying for more lenient vaccination laws in the state.