Special Ed: ‘It’s Been a Rollercoaster’ 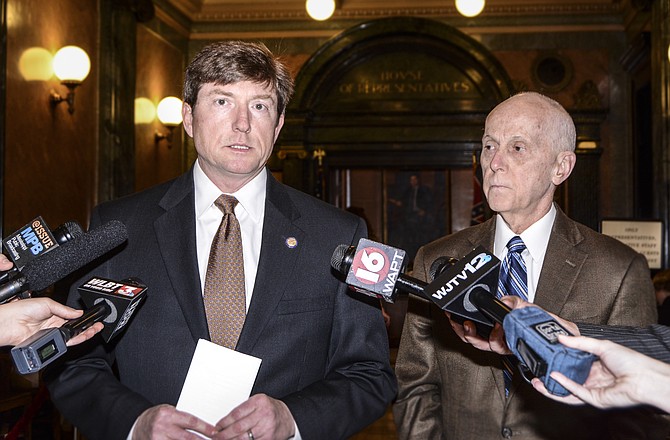 Rep. David Baria, D-Bay St. Louis (left), is introducing legislation this session to help parents of students with special needs understand their rights and improve graduation rates among those students. He is pictured with Rep. Cecil Brown (right). Photo by Trip Burns.

Holly Hardin's son was suspended twice in a week in January. Hardin, a Mississippi mother and student, had to stay home with her 8-year-old for several days during his last suspension. The Jackson-metro area elementary school punished the student after he became frustrated in class and balled his fist around his pencil, an action that the school called "aggressive."

"It's been a rollercoaster," Hardin said.

Hardin's son was diagnosed with Asperger's over a year ago, but because he is not getting the services he needs, his behavior has not improved.

"There needs to be someone trained specifically with Asperger's children ... that knows the quirks of the disability that can ... watch him in social situations and help guide him," Hardin said. "There's nobody there to do that."

While her son is very bright academically, his low social skills result in behavioral issues. Recently, the school asked Hardin to pick him up in the middle of the school day because, Hardin said, her 8-year-old would not look his teacher in the eye. The inability to make eye contact is a common condition of people with Asperger's.

Joy Hogge, executive director of Families as Allies, gets calls from parents like Hardin every day. The issues facing Hardin are common, and they are statewide. Ultimately, she says, the problems stem from the state not following the federal Individuals with Disabilities Education Act.

"The law is about what school systems should do, and the laws say that the school systems need to be proactive in finding these children and identifying them, and getting them the services they need," Hogge said. "From what we see, that doesn't happen."

Hardin's son wasn't tested to see if he qualified for an individualized education program until more than a year after his disability was first recognized. Even then, it took several months for Hardin to get her son's first IEP meeting, which had to happen before he could start receiving services.

Her son, Hardin said, is only allotted 90 minutes of behavioral counseling over the course of nine weeks. Divided evenly, that's 10 minutes per week and "isn't enough to accomplish anything," Hardin said.

Many educators, disability advocate Mandy Rogers said, don't know the procedures regarding students with special needs, such as what kinds of disabilities, like dyslexia, are covered under disability law.

As children with special needs in the state have gained more attention in recent years, the Legislature will address two bills aimed at improving special education in the state this session. Senators already passed Senate Bill 2695, authored by Republican Sen. Nancy Collin from Tupelo, through the Senate Education Committee. It would create the Equal Opportunity for Students with Special Needs program. Similar bills have been unsuccessful in recent years.

Rogers supports this measure, which would give scholarships, or vouchers, to students to use on alternative school support, such as tuition to private schools. "We've got to start somewhere," Rogers said.

However, opponents of the bills worry that the scholarships will only benefit a small percentage of students, when the state should be focusing on solving the special-education issues in public schools that affect all children.

Getting the State's Act Together

Crawford, who is a mother of a student with special needs, said she doesn't think these children "need to sit and wait until (public schools) can get their act together in some of these schools that are not doing well. ... Let's give these children what they need now."

Hardin, on the other hand, doesn't know how helpful transferring her son to a private school would be. "You can take your kid out of public school and put him in private school, and it would be the same situation," Hardin said. "Unless they're trained to work with Asperger's, I don't know if it would be any different."

Hogge explained that students with special needs in private schools may not be protected under the law to receive the education they deserve because private schools are not obligated to comply with IDEA.

Countering that argument, Rogers said, "Our students don't have protections in the public schools even though we have a federal law. They just don't."

David Baria, D-Bay St. Louis, introduced House Bill 649, which would create the Mississippi Office of Educational Special Needs Counsel. The counsel would provide guidance and advocacy to parents of children with disabilities to help them obtain special education services.

Baria is also pushing an amendment to the bill that would give high school diplomas to students with special needs who complete their individualized educational program.

Hardin said legal counsel for parents of students with special needs would really make a difference in her child's education because it would give her access to information and legal support regarding education law. "I have no clue. ... There's not a way for me to be aware of everything," Hardin said.

But expensive lawsuits seem like a diversion to the real issues these students face.

Over the course of a four-year lawsuit between one family and the Quitman Consolidated School District, Rogers found that the district spent nearly $1 million on legal fees.

"What these parents were asking for would have cost nothing," Rogers said.

In 2014, the family and school district settled the lawsuit, but still the district did not fulfill its promise to provide services for students with special needs.

Rogers understands the seemingly endless battle over special education in the state. She served on the state's special-education task force in 1993 and in 2014. "And we're still talking about the same issues," she said.

Hogge, who has also served on the task force, said she is concerned Mississippi is not receiving all of the federal money under IDEA that the state is entitled to. "Is our state really drawing down every dollar it can draw down?" Hogge said. "And when those dollars come into the state are they really, really being used for these children?"

Rogers said the state probably is drawing all of the IDEA money. "Are we using it effectively and efficiently? No. I don't think we are," Rogers said.

Another bill this session might help to do just that. Rep. Nick Bain, D-Corinth, authored House Bill 814, which would create a separate line item in the state budget for special education, separating it from the Mississippi Adequate Education Program.

The bill would also require MDE to provide a position for a statewide autism coordinator to develop policies to help students with autism. "There's going to have to be a better accountability of how special education funds are being spent," Rogers said. "And I really hope there's transparency in that."