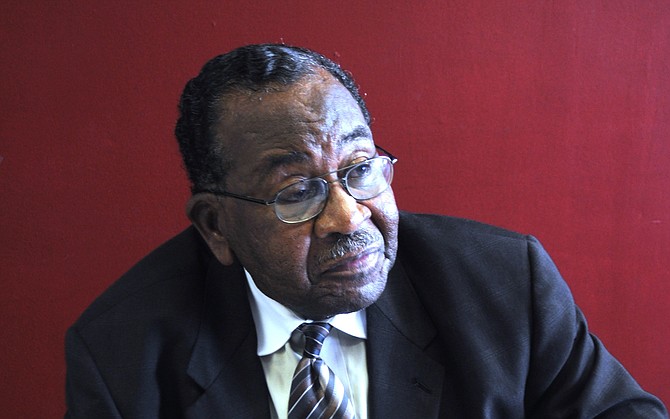 Frank Bluntson, a juvenile-detention center director, takes issue with a report that says employees are confused about who is in charge. Photo by Trip Burns.

On Oct. 18, 2014, a teenage boy was booked into the Henley-Young Juvenile Justice Center. The boy has bipolar disorder and schizophrenia, and the facility's medical staff did not believe he should be admitted because the jail lacked the resources to treat the young man's mental illness.

Subsequently, Hinds County Youth Court Judge William Skinner arrived at the facility and overrode the decision of the medical staff and, in the presence of the sick boy and law enforcement officers, made some phone calls. During one of the calls, the jail's security cameras captured Skinner calling Brenda Frelix, a one-time director at the facility, a "stupid bitch."

Disability Rights Mississippi, one of the organizations that filed a lawsuit against Hinds County in 2011 on behalf of children, filed a formal judicial misconduct complaint with the Mississippi Commission on Judicial Performance.

"Judge Skinner's unprofessional and unethical behavior constitutes judicial misconduct. We recommend that this incident be investigated and suggest training for the Judge on proper treatment of individuals with disabilities, the appropriate limitations on his role with respect to oversight of Henley-Young, and his obligation to follow the federally approved Settlement Agreement, which prohibits the use of profanity in the presence of youth," DRM Executive Director Anne Maclaine wrote in a letter to the commission.

Messages could not be left on Skinner's office phone, and emails to Skinner and his court administrator were not returned as of press time.

The incident drew the attention of Leonard B. Dixon, a juvenile-justice expert the county hired to monitor improvements ordered as a result of a 2011 lawsuit against the county. Dixon's latest report details rampant backbiting, infighting, cliques jockeying for power and widespread fear—not among the children in Hinds County's youth jail, but among the adult staff and administrators running the facility.

Dixon has been visiting the youth jail and issuing quarterly reports for two years, since the county settled with youths and their advocates over abusive conditions and lack of access to educational services. In that time, Dixon has noted that the county at times failed to make even relatively minor fixes, such as installing lights in dark areas, and he has detailed the facility's ongoing challenges with keeping detention officers as well as turmoil in the upper ranks of leadership. Dixon begins the report by referencing the Skinner incident, calling it a "major concern."

Politicking within the facility has created a "disheartening environment for staff and youth," Dixon noted, adding: "This in turns creates an environment where children are not the main focus and personal agendas are. It is my professional opinion that this hurts youth, staff and the facility because there is a level of 'fear' and unprofessional behavior that permeates the facility."

In conclusion, Dixon states: "At this point the staff is floundering because they are unaware of who is in charge of this facility. The bottom line is someone has to say 'enough is enough' and focus on these already vulnerable youth."

Frank Bluntson, the interim executive director of the juvenile justice center, declined to comment about Skinner, with whom he says he has good working relations, but disagrees with Dixon's assessment of the confusion about leadership.

"I don't have any problems because I'm calling the shots. I don't know where that comes from," Bluntson told the Jackson Free Press Tuesday.