How Many Hotels Can Downtown Support? 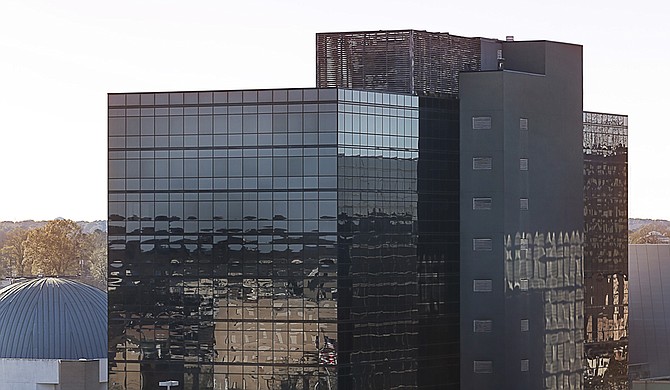 A plan to refurbish one tower of the City Centre building could be a curveball for building a new convention-center hotel in downtown Jackson.

For close to eight hours every day, a tower crane soaring above Jackson swivels and pivots like the minute hand of a clock gone a little haywire.

The crane, which will be part of Jackson's skyline for at least another year, is helping build what promises to be the newest permanent fixture of the cityscape, a 205-room luxury hotel operated by Starwood Hotels & Resorts.

After a brief snag in finding a buyer for about $9 million in bonds, the Westin is back on track to complete construction on the site of the former Mississippi Valley Title Building on Tombigbee and West streets by early 2017.

Developers of the nine-story, 169,000-square-foot hotel say the project represents a renaissance for downtown and an answer to the need for more hotel beds. That, the thinking goes, will draw more and bigger conventions with attendees spreading cash around downtown and shoring up Jackson's struggling revenue coffers.

The Westin has been under construction since August, but is not the only the hotel game in downtown. At least three other proposals are on the drawing board to add hotel rooms to downtown, but opinions vary widely about what the market in Jackson will bear. Consider that plans for the Westin call for a market-high nightly room rate of $145 per night. Discount websites like Kayak and Expedia advertise rates for the Marriott and Hilton Jackson for $110 and $109 per night, respectively. A night at the Hilton Garden Inn, better known to locals at the King Edward, runs guests about $99 per night.

Leland Speed, a developer and mover-shaker, wonders whether the laws of supply and demand justify building new hotels from the ground up.

"Jackson is a low-hotel-rate town. For $59, you can get a room and breakfast," said Speed, a former investor in the now-shuttered Edison Walthall Hotel. "There's a real question (about) what you can get for a downtown hotel room in Jackson. The business travel isn't there any more."

The Mississippi Business Journal reported in July 2015 that Jackson hotel rooms fluctuated widely since 2010, from the mid-$60 range to $76.59 in summer 2014, based on data from international travel research firm STR. The company's analysts also predicted that demand for hotel rooms expanding at a healthy rate.

Such forecasts are driving the latest effort to construct a hotel across from the Jackson Convention Complex. The Jackson Redevelopment Authority, a quasi-governmental agency that can loan money backed with the City of Jackson's credit and helped redevelop the King Edward and build the convention center, put out a request for proposals for a convention-center hotel in June 2015.

Two joint-venture firms responded: Herndon, Va.-based based Red Leaf LLC working with Advanced Technology Building Solutions LLC, which is headquartered in Jackson. The other is Atlanta-based Engineering Design Technologies Inc, which is working with Jackson-based Mississippi Developers LLC. Both proposals call for an eight-story, 304-room hotel totaling 236,070 gross square feet. Food and beverage space, which includes a restaurant and bar, total 4,140 square feet in both proposals.

Don Hewitt, a developer and principal with ATBS, won a $600,000 judgment against the City of Jackson for a civil-rights violation before a judge dismissed the award in January. Hewitt also unsuccessfully filed a lawsuit to block the sale of bonds for the Westin project, arguing that it is illegal for public money to flow into the hands of private developers.

Besides providing needed hotel space, Hewitt believes his team's proposal, which would also solicit Starwood to operate the hotel as a Sheraton or Crowne Plaza, would also create jobs and use Jackson vendors for construction supplies and furnishings.

"We know the Jackson market is hurting for jobs," Hewitt said. "There's a lot of opportunity to create jobs here, to keep people locally employed."

Mitzi Bickers, a representative with Mississippi Developers, told the Jackson Free Press on Dec. 28 that she would have an EDT representative call a reporter later in the day. Follow-up calls to Bickers on Dec. 29 went straight to voicemail.

The quest for a convention-center hotel has taken a number of bizarre—and, for city officials, frustrating—turns in recent years. In 2006, a Dallas-based company called TCI, connected to controversial businessman Gene Phillips, formed a local limited-liability company to purchase property located between Pearl, Mill and Pascagoula streets in downtown Jackson for $1.5 million with the blessing of then-Mayor Frank Melton.

Those plans called for two hotels as well as residential, retail and office space, but never materialized and the city reacquired the land back in 2013 after lengthy negotiations with TCI. Mayors Harvey Johnson Jr. and late Mayor Chokwe Lumumba also sought hotel proposals of their own, but none of those plans got off the ground, either.

The JRA, which added four new board members this year, has not scheduled a vote on which proposal to green light, although developers expect the commission to act by the end of January 2016. Regardless of what happens with the JRA proposals, a third option is on the horizon that backers say will make more economic sense for Jackson.Hertz Investment Group, headquartered in Santa Monica, Calif., which owns much of the office space in downtown Jackson, has plans down the road for a 204-room hotel in the City Centre building, which sits cater-cornered from the convention center. Jim Ingram, executive vice president for Hertz, said the south tower of the two-building plaza is now empty and could be refurbished into a hotel likely without any zoning variances.

"We are going to try to make ours work for the convention center hotel. But when the construction would start, I'm not at the point to say," Ingram said.

Like Leland Speed, Ingram is dubious whether downtown can support a brand new hotel and said Hertz's long-term downtown revitalization strategy is to convert 300,000 square feet of office space to other uses, including hotel rooms and residential living space.

"Doubling the residential units is going to be the best driver for growth in downtown Jackson," Ingram said.