‘What the Religion Teaches’: Feeding the Homeless in Smith Park 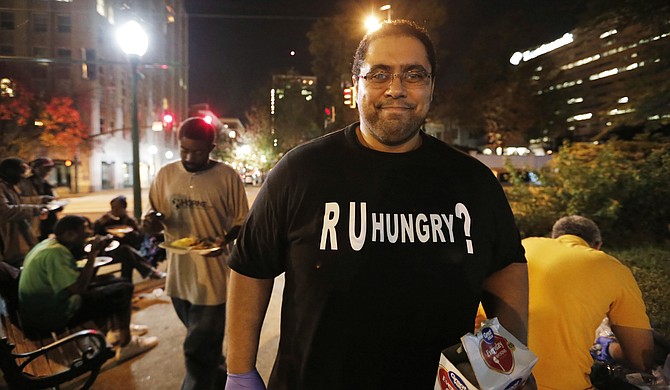 Bilal Qizilbash, 29, pulls together a group of volunteers to provide hot meals to homeless people every Friday at Smith Park. Photo by Imani Khayyam.

It's not yet 6 p.m., and more than 20 people have formed a line under the streetlights near the southeastern corner of Smith Park. This is not their usual gathering place. Typically, the group meets under the gazebo, but tonight, a Jackson police officer says they have to clear the park because an event is taking place, but provides no details of the program.

Bilal Qizilbash (pronounced kizzle-BOSH) is annoyed and says he plans to flag down the next cruiser he sees to get some answers. For now, he and his fellow volunteers are focused on scooping mounds of yellow rice and shawarma, carving off hunks of rotisserie chicken, pouring cups of sweet tea and making sure that anyone standing within earshot who wants food has a plate.

Later, although it's still unseasonably warm even after the sun has set, Qizilbash also distributes mylar blankets for any unexpectedly cold nights in the near future.

Qizilbash has been bringing dinner to homeless people in Smith Park every Friday for almost nine months, but he and his fellow volunteers never ask anyone about their housing status before offering them sustenance. Everyone is greeted the same way: "Are you hungry?"

The group that now calls itself R U Hungry? is not formally organized as a nonprofit nor does it receive grants or, for that matter, any other reliable stream of financing besides the $150 to $200 put up by Qizilbash, volunteers and their families, and periodic donations of cash and supplies. R U Hungry? also doesn't consider itself a ministry, even though many of the volunteers, including Qizilbash, cite faith as motivation for their service.

"For as many people who claim to love Jesus and love religion, I've seen some of the most unreligious behavior in regard to treating the homeless—almost like they're a blight on society—(as opposed to) saying 'How do we help these people a little?' Instead of getting angry at the symptom, why don't we go to the root cause of the problem?" says Qizilbash, who is a Muslim.

When surveyors asked about factors that led to homelessness, people cited the loss of a job, substance abuse, family disruptions such as divorce or death, domestic violence, mental illness and other reported medical and physical problems, eviction and foreclosure, debt and even natural disasters.

The majority of homeless people in Hinds County are African American men. Volunteers with R U Hungry? say they're not under any illusions that they're necessarily lifting people out of homelessness. Qizilbash simply realized about a year ago that Jackson's unsheltered homeless population lacked a reliable source of dinner on Friday nights. At the very least, he thought, he would be able to help take care of one critical need that directly affects their health.

A woman who identifies herself only as Angel and says she recently left an abusive husband, says that if was not for R U Hungry, she and her homeless brothers and sisters would have to fend for themselves or possibly go hungry until the next day.

"Everybody ate, nobody got upset. There was no controversy," Angel says.

Tonight's issue with the JPD notwithstanding (later, a patrol officer tells Qizilbash that the group had been cleared to re-enter the park but moving the dwindling feast at that point would have been more trouble than it's worth), the group has not met resistance from anyone, including city officials, businesses—most of which have closed by the time dinner starts at 6 p.m.—or other nonprofits doing similar work.

Qizilbash started by taking pizzas to homeless people in Queens, N.Y., where he grew up. In 2012, after graduating with a degree in biology from Stony Brook University, he enrolled at Mississippi College, where he is finishing his master's degree in biomedical sciences.

One night earlier this year, he picked up 10 pizzas from Little Caesar's and took them to the park, where they were gratefully devoured.

"We are in a first-world country, and some of these people are living worse than I saw in Pakistan. It just blows my mind that this is the United States. I said to myself something needs to be done," he says.

Around the same time that Qizilbash was delivering pizzas, Walid Siddig was also providing the occasional Friday meal to homeless people. Siddig, who owns a business in Jackson, would pick up 10 to 20 burgers and pass them out downtown.

Siddig, 41, and Qizilbash, who attend the same mosque, decided to combine their efforts into R U Hungry?.

Siddig, who is from Sudan and came to Mississippi to study computer science at Jackson State University, believes that his volunteering with R U Hungry pleases God and helps cleanse away sins.

Over time, Qizilbash wants to be able to put homeless people to work at his business. In 2014, working with Mississippi College professor Dr. Elizabeth Brandon, Qizilbash found that juiced raw curly kale kills melanoma cancer cells in culture. The research has been widely heralded as a cancer breakthrough but, because kale juice itself can't be patented, Qizilbash formed a company to figure out how to produce juice on an industrial scale. That includes farming the kale, which he believes will fetch premium prices given the fertility of Mississippi's soil.

After he completes his master's degree, Qizilbash will start working on another master's degree in the business administration program also at MC. In the meantime, he's working to stabilize R U Hungry? by setting up a GoFundMe crowd-sourcing page.

Aladdin Mediterranean Grill, where R U Hungry? purchases large trays of food each week, has also pledged a portion of holiday gift-card sales to the organization.

"Don't misunderstand me, I'm still interested in making a profit. My goal is not to forget about the homeless, but to incorporate them," Qizilbash said