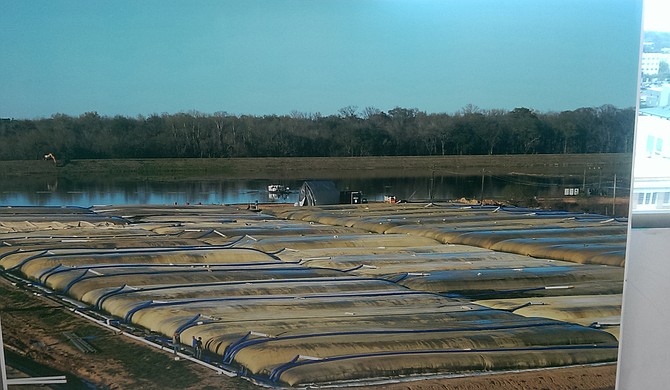 The West Rankin Utility Authority is using the slow pace of progress on removing 305,000 wet tons of sludge from the Savanna Street Wastewater Treatment Plant as ammunition in two legal disputes with the City of Jackson. Photo by R. L. Nave.

Embroiled in a two-front battle with the City of Jackson over the wastewater-treatment issues, the West Rankin Utility Authority hopes to fight it out on its home turf—in Rankin County.

Part of the saga started in 2011, when the WRUA asked state environmental regulators for a permit to construct a new wastewater-treatment plant in part because of Jackson's ongoing challenges maintaining its sewer-treatment system. That resulted in a 2013 settlement with the Mississippi Department of Environmental Quality and the U.S. Environmental Protection Agency over the years-long dumping of untreated sewage into the Pearl River.

The settlement, or consent decree, requires the City to upgrade its sewer system and remove sludge from holding lagoons at wastewater-treatment plants.

In April 2015, the MDEQ approved the permit application from the WRUA to build a $125-million sewer-treatment plant on the banks of the Pearl River. The City of Jackson contested the approval, first administratively and then through a lawsuit filed in Hinds County Chancery Court to block the permit, arguing that state law encourages regionalization of wastewater treatment while a new plant would represent "deregionalization."

"We think it's the wrong jurisdiction," said Keith Turner, an attorney for the WRUA, which wants the case heard in Rankin County Chancery Court.

A hearing on the WRUA's request to send the case to Rankin County is scheduled for late December, Turner said.

Meanwhile, in a separate suit, the WRUA also sued the City of Jackson alleging that Jackson's "years of sludge mismanagement which directly resulted from the city's failure to repair severe breaks, cracks, and holes in the City's wastewater collection system" resulted in higher costs for the WRUA and its customers.

In addition, Turner said, the slow pace of progress on the removal of 305,000 wet tons of sludge is central to the WRUA's argument that Jackson has ignored problems at the Savanna Street Wastewater Plant and breached its contract with WRUA by not making repairs that would have kept the authority's rates from increasing.

In November, the Jackson City Council voted down a proposal to award a $13 million contract to a joint venture between Russellville, Ark.-based Denali Water Solutions and a local firm, Socrates Garrett Enterprises Inc.

Under the consent decree, Jackson would have to pay daily fines if a January 2018 deadline for removing the material is not met. Mayor Tony Yarber has said he hopes to avoid the fines, telling the Jackson Free Press after a city council work session on Sept. 21 that his administration has alerted the EPA that the City might be in violation.

Yarber has also said that it would take at least a year to reissue a request-for-proposals for the biosolids contract.

In an order on Nov. 24, U.S. District Judge Daniel P. Jordan said the federal courts have no jurisdiction in the dispute between Jackson and the WRUA and remanded the case back to Rankin County Chancery Court.