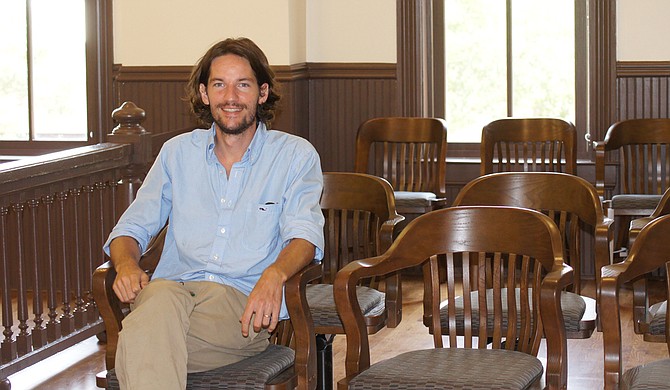 Patrick Weems is the director of the Emmett Till Interpretive Center in Sumner, Miss. “Reconciliation begins by telling the truth,” he says. Photo courtesy Investigation Discovery

Since 2007, city officials and local residents of Sumner, Miss., have worked together to reconcile a town that, 60 years ago, was the backdrop for an event that was a catalyst of the Civil Rights Movement.

In 1955, two white men (though more were involved), Roy Bryant and his half brother, J. W. Milam, murdered Emmett Till, a 14-year-old African American boy, in the Mississippi Delta near Money after Till whistled at Bryant's wife. The two men were acquitted for the murder the same year, but soon afterward, publicly admitted in Look Magazine to the crime. In 2007, members of the Emmett Till Memorial Commission, which the Tallahatchie Board of Supervisors appointed, issued a formal apology to the Till family for the incident.

Weems transferred to the University of Mississippi a couple of weeks before Hurricane Katrina and says that he was shocked at the divided nature of the university. He created a group called Respect Mississippi to start conversations about why divisions exist in culture, such as separate fraternities for different races, and other social issues such as racism and segregation.

From there, he began working as a youth organizer for the William Winter Institute for Racial Reconciliation and developed the Summer Youth Institute, which is a two-week learning experience where participants do a civil-rights pilgrimage and then go home and do community projects. He earned his bachelor's degree in philosophy in 2009 and a master's degree in southern studies in 2014, both from UM.

Weems says he chose southern studies because it helped him with his identity, as well as to apply historical context. "Southern culture affects us all, and unless we understand that history, we're not going to understand ourselves," he says. "Just really getting deep into why religion is so important in the South, how politics have been shaped in the South, how race relations have been created and understanding the system."

The center seeks to use artwork as a tool to reach generations. Weems says one of its goals is to figure out how to move the community forward and create spaces for people to feel welcome to engage in conversations about race relations and the positive impact of the Civil Rights Movement.

Additionally, the interpretive center functions as a community center, serving the people who live in Tallahatchie County. There's a yoga class on Thursdays and a library in the back. The hope, Weems said, is that the center eventually functions fully as a museum and community center. Large panels explaining Till's story that focus on the trial in Sumner cover the center's walls, and staff or interns give tours that begin with a sentence-by-sentence reading of the 2007 apology.   Weems believes that art allows the space for people to engage and not feel threatened.

Currently, the Interpretive Center is looking for candidates for a two-year internship. This winter, Weems says the center plans to host a photography workshop, a week-long program dedicated to telling positive stories of the movement and community's legacy, for the internship. Next winter, the center will host a documentary project that lasts four weeks, where interns will help community members who lived through the Civil Rights Movement and were there during times of divide in Sumner tell their stories. The center will partner with Barefoot Workshops on the projects, an organization that aids in creating citizen-produced media for education and advocacy purposes. Weems hopes that by using participants from inside the community, the center can offer a new perspective on Emmett Till.

On Aug. 29, the Emmett Till Interpretive Center will host a 60-year anniversary event from 2 p.m. to 4 p.m. That day, participants can tour places such as Bryant's Grocery, the store where Till whistled at Bryant's wife, the newly restored courthouse in Sumner and the Tallahatchie River near the site where Till's body was found. There isn't a fee for the event, but donations are accepted. The center is currently attempting to raise money to match a grant that will fund the workshops and art work for the center.

"We still have a lot of ways to go," Weems says. "The reality is that it's a little surprising that we exist. You see a lot of civil-rights museums in cities like Birmingham (or) Memphis ... so for us to exist in a town of 400 is pretty extraordinary."

For more information on the Emmett Till Interpretive Center, visit emmett-till.org.