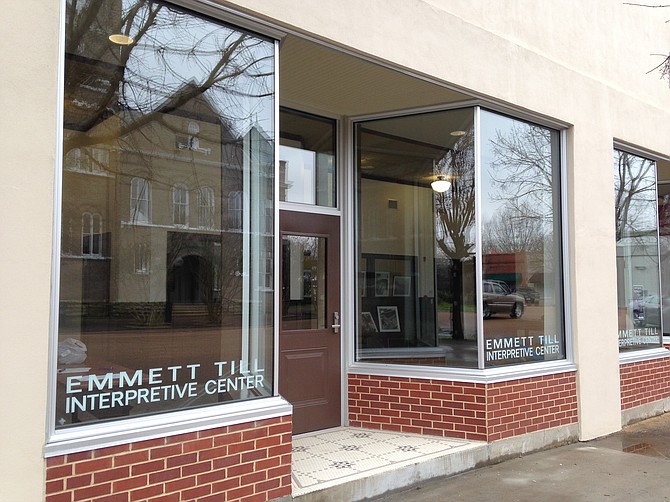 The Emmett Till Interpretive Center, housed in a glass-front former grocery store, currently houses a traveling exhibit from Delta State University that contains large, silk-screen panels detailing the 1955 trial based on newspaper accounts and a short introductory film about the trial. Photo courtesy Patrick Weems

SUMNER, Miss. (AP) — After decades of soul-searching, The Mississippi Delta town of Sumner with a reluctant link to the landmark Emmett Till civil rights case is ready to celebrate.

The newly restored Tallahatchie County Courthouse, where the trial of the two men accused of killing Till was held, officially swings open its broad doors to the public Saturday, along with a still-developing Emmett Till Interpretive Center across the street. The official openings will be marked with a day of events that will be recorded and broadcast statewide later on Mississippi Public Broadcasting.

The interpretive center, housed in a glass-front former grocery store, currently houses a traveling exhibit from Delta State University that contains large, silk-screen panels detailing the 1955 trial based on newspaper accounts and a short introductory film about the trial. The center also has a community meeting room, and officials plan to fill out the space with other interactive exhibits about the Till case and the civil rights movement as funding becomes available.

Inside the Romanesque courthouse, a working facility that houses courts and county offices serving the western side of Tallahatchie County, visitors will find the restored courtroom where Roy Bryant and his half-brother, J.W. Milam, were tried for the death of 14-year-old Till and acquitted by an all-white, all-male jury in September 1955. The courthouse's lone courtroom is still used but, with some nods to modern-day needs, has been restored to the way it looked at the time of the trial.

It's a legacy no one wanted but that many have come to terms with.

"The people who live here resent the fact that the murder was not committed here and the kidnapping did not occur in this county," says Frank Mitchener, a white lifelong Tallahatchie County planter and co-chairman of the Emmett Till Memorial Commission.

"But because the body washed up on the Tallahatchie (County) side of the river, the trial was held here and we get blamed for it," he said.

Making matters worse, adds the other co-chairman, John Wilchie, also a lifelong Tallahatchie resident and the county's first African-American justice court judge, was that jurors were drawn from the mostly white hill country on the eastern side of Tallahatchie County, not the mostly black Delta west side that is closest to neighboring Leflore County where the crime occurred.

It was a recipe that left tiny Sumner, about two hours south of Memphis along U.S. 61, holding the bag for a brutal crime widely recognized as the impetus for the civil rights movement of the 1960s.

Healing is a work in progress. It's been helped in recent years by the Till Commission, established by the Tallahatchie County Board of Supervisors to foster racial reconciliation.

The commission secured grants and other funding to make the courthouse renovation happen and to establish the Interpretive Center.

In 2007, the commission unveiled a historical marker outside the courthouse and offered an apology to the Till family.

Also, revitalization efforts that have brought new life to the town square area around the courthouse got support from the commission.

Clearly, though, the centerpiece of the commission's work to date has been the courthouse renovation and opening of the Interpretive Center.

Till, from Chicago, was visiting his uncle in Leflore County in August 1955, when he allegedly whistled at Bryant's wife, Carolyn Bryant. Till had gone to Bryant's Grocery in the Money community of Leflore County to buy candy.

The African-American teenager was later kidnapped from his uncle's home during the night, beaten and shot. The body turned up in the nearby Tallahatchie River with a 70-pound cotton gin fan tied around the neck with barbed wire as a weight.

Bryant and Milam were charged in Till's death and tried at the courthouse in Sumner since the body was found in Tallahatchie County. During the trial a month after Till's death, jurors acquitted the two defendants after about an hour of deliberation. A historical marker that stands today outside the closed grocery along a sparsely traveled highway notes that, according to one juror, the verdict would have taken less time if they had not stopped to drink sodas.

Bryant and Milam, who died in 1994 and 1980, respectively, later admitted to the crime in a Look magazine interview, protected from prosecution again by the principle of double jeopardy.

Till's mother demanded an open casket at her son's funeral to call attention to the brutality of the slaying, and the images helped galvanize the emerging civil rights movement.

Saturday's events help bring full circle the community's 60-year quest to deal with its past, says Patrick Weems, director of the Till Commission.

The Thacker Mountain Radio Hour will broadcast a special show from the site starting at 2 p.m. The courthouse will be open to visitors beginning at 11 a.m.

Guests during an hour-long program that's open to the public will include rhythm and blues legend Dorothy Moore, Pulitzer-winning photographer Alysia Burton Steele and the Tutwiler Community Center Student Blues Band. Mitchener and Wilchie will lead a dedication of the courthouse.

Born 30 years after the Till slaying, Weems says the commission works to teach visitors that the events that took place in the courtroom relate to younger people today.

"We highlight the fact that the Civil Rights Movement was also a human rights movement," says Weems, who is from the Jackson, Mississippi, area. "That's something that people today understand."

Weems says he's not naive; that he understands the work isn't finished. But he's pleased by the progress he's seeing.

"It's a continuum," he says. "Racial reconciliation is a process."