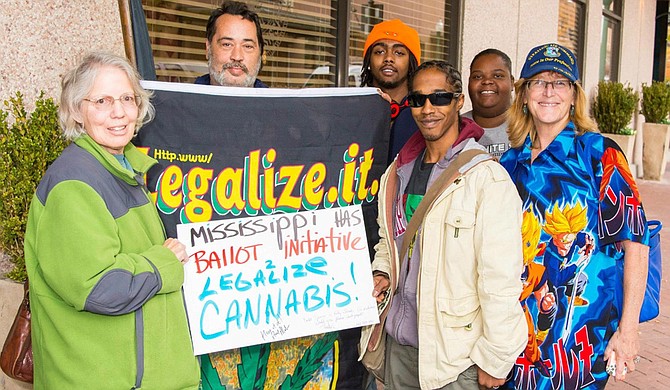 Kelly Jacobs (far right), one of the lead forces on Initiative 48 to legalize smoking and growing pot in Mississippi, fears organizers could miss the mark to put it on the 2016 ballot. Also pictured, from left to right, are: Susan Watkins, David Lions, Jamarcus Manning, Kassa Whitley and Shannon Smothers-Wansley. Photo courtesy Kelly Jacobs/File Photo

After generating lots of buzz, the organizers of a statewide ballot initiative to legalize cannabis in Mississippi and commute the sentences of people incarcerated for marijuana-related crimes fear their dreams are going up in smoke due to disturbing efforts to kill it.

"There is no way we are going to be able to vote for this in 2016," said Kelly Jacobs, one of the lead organizers of Initiative 48, in a telephone interview with the JFP.

The proposed rule changes include full legalization and taxation of marijuana for adults over age 21. Recreational users could have nine or fewer marijuana plants for their personal use. The state would classify anyone with more than nine plants as a cannabis farmer, required to pay an annual $25 fee to the local municipal or county.

Prospective dispensers would have to pay $1,000 for a special license.

Additionally, a state sales tax of 7 percent would be charged on all sales with the exception of medical marijuana and industrial hemp. To put the initiative before voters in 2016, organizers must collect 107,000 signatures from five districts across the state by October 2015.

By Jacobs' count, the initiative has just 10,000 certified signatures and needs more than 100,000 more. Challenges, Jacobs says, have included pervasive fear that law-enforcement agencies would have access to the petitions and target signers for arrest and circuit clerks taking too long to certify signatures. Jacobs also describes what she calls intimidation from local police.

At one event in the Mississippi Delta, she said five police cars arrived along with a paddy wagon, and officers threatened volunteers with arrest although nothing came of the event. In another city in her home county of DeSoto, she said an officer said she would be charged "solicitation" in government-owned park during a petition-signing event.

At the Neshoba County Fair, Jacobs said the group wanted to have a booth and were told, as she characterizes it, "no, no and hell no." Initiative 48 supporters also asked permission to circulated petitions at the Mississippi State Fair in October, but the group has not received a response from fair officials, she said.

The complaints include violations of the group's First Amendment rights of free speech and assembly because, she writes, "police officers in various cities have threatened to arrest volunteers."

Her letter also complains of "voter-registration suppression," of which she wrote to Hosemann's office: "One Circuit Clerk rejected a petition, writing that it was a copy when it clearly was an original. I put a drop of water on the date so the ink would run to demonstrate that I had not submitted a copy and returned the original petition to the Circuit Clerk. This same Circuit Clerk rejected a petition claiming a small mark on the back page was blood. On the advice from your staff, I also returned that petition with clear strapping tape over the mark. That Circuit Clerk has not returned either petition to me. One Circuit Clerk wrote on a rejected petition that she could not read the cursive signature and rejected the petition even though the printed name was clearly legible. I called to ask if the printed name was a registered voter and when I was told that she was, I returned that petition and it was certified."

Jacobs has not received a response from Hosemann's office; Nathan Upchurch, a spokesman for the secretary of state, responded to a request for comment with an email saying, "We are looking at it, and we will get back with you when we can."

Another snag to the Initiative 48 came when Jeremy Bufford, a Tampa-based businessman, agreed to help bankroll the effort by promising to pay between $1 and $2 to petition gatherers per certified signature. In May, Bufford emailed several organizers of the initiative saying he received a threat asking him to stop paying signature gatherers.

"After consulting with law enforcement and my attorneys, I have decided to withdraw my plans for Mississippi, effective immediately. I want to see marijuana reform passed as much as you all do, but I am not willing to endanger my family to do so. I have received idle threats in the past, and this wasn't one of them," Bufford wrote.

Bufford said in the same email that he wouldn't be responding to any more messages from organizers, nor he did not respond to messages from the JFP for this story.

Jacobs' own aggravation in working with government officials on Initiative 48 is what made backers want to bypass the Legislature and take the marijuana legalization question directly to voters.

She points to the number of ballot initiatives in play in Mississippi—including for education funding and preserving Mississippi "heritage" through Confederate symbols—as symbolic of citizens' dissatisfaction with the political status quo.

"It looks like the way America is going, a lot of people are frustrated with their government," she said.