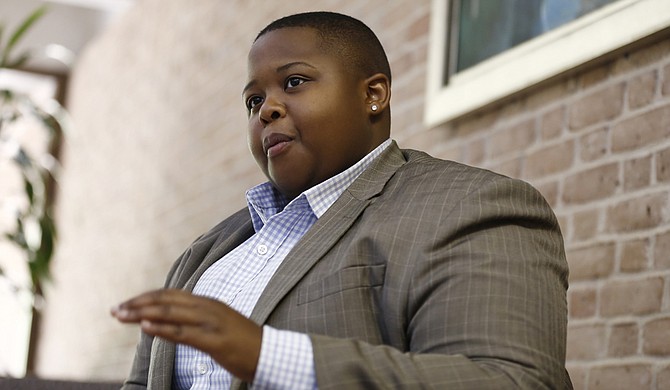 Ashlee Davis, the director of the LGBT Rural Summit program in the U.S. Department of Agriculture, said that all of USDA’s policies now include the terms “gender identity” and “gender expression” in order to not exclude the LGBT community from their services. Photo by Imani Khayyam.

Ashlee Davis wants members of the LGBT community to know that the U.S. Department of Agriculture will not discriminate against them.

Davis, who runs the National LGBT Rural Summit Series, is trying to help get the word out that "gender identity" and "gender expression" are now part of all the department's anti-discriminatory policies. The USDA's programs are typically marketed to farmers or agricultural workers in rural America but are available to everyone.

"When (people) hear 'rural America,' I don't want them to think that means one type of person: a white, rich male."

To communicate the change, Davis coordinated the LGBT Rural Summit event Friday at Millsaps College to facilitate conversations for the LGBT community in Mississippi and to provide awareness of grants available to supportive organizations and community members. The funds can help with a variety of needs, from affordable housing to business grants that can be used to fund facilities and programs simply because they are in a rural or underdeveloped part of the country.

Mississippi qualifies as rural America, so businesses and groups can apply for the community grants. Individuals can also apply for affordable housing through USDA programs.

Davis said she is working to make space for everybody, so anyone who applies for housing or grants through the USDA is not discriminated against. Previously, Davis said, a member of the LGBT community might feel stigmatized by perceptions about the department and likely not know to apply for housing or business grants.

"Our entire country was rural at one point, and somehow, some way we found a way to make space for everybody," she said. "We're going to do it in rural America, too."

In Mississippi, progress for the LGBT community has been slow compared to the rest of the nation, and last week, the Campaign for Southern Equality challenged the same-sex couple adoption ban—the only one of its kind in the nation—in federal court.

The case, Campaign for Southern Equality v. Mississippi Department of Human Services, was filed in the U.S. District Court for the Southern District of Mississippi on behalf of four same-sex couples. Roberta Kaplan is serving as the lead counsel; she also represented the plaintiffs in the Campaign for Southern Equality v. Bryant case that began the fight to legalize same-sex marriage in Mississippi before the Supreme Court stepped in, and successfully argued to overturn the Defense of Marriage Act before the U.S. Supreme Court last year.

Despite progress in some law, discrimination against the LGBT community, especially in the workplace, is still legal. Some federal departments have taken the lead in changing policy language to set an example for other employers. Davis said it's also about changing the mindset of organizations that might not consider USDA funds.

"When they do their strategic outreach, we want them to think about our LGBT organizations," she said.

The USDA is not only editing its policies but also training its personnel. Almost 20 states have gone through training that focuses on not discriminating against people regardless of their gender identification, and Davis said Mississippi's USDA staff likely will go through training this October. Assisted programs, like SNAP benefits (the supplemental nutrition program, formally called food stamps) are not included in the new anti-discriminatory policies, but Davis said the USDA intends to set an example, hoping the effects will trickle down to affiliated agencies. Davis said it is important to reach out to individual states, mainly by thinking about how services can help the people on the ground.

"The idea is that after we leave, they can go in, sit down and fill out paperwork for a community facilities grant (through USDA)," Davis said.

Hattiesburg couple Sarah and LB Bell founded the Spectrum Center, the first LGBT community center in Mississippi, in their hometown. Their original and still long-term plan for the center is to make it a temporary housing shelter for LGBT teens. Currently, the building is functioning as a community center with movie nights, group meetings and HIV testing once a month.

Within the month, LB said, they hope to function as a drop-in shelter with daytime hours. The hope is that the Spectrum Center brings the LGBT community together, with buy-in from the community.

"There is still a lot of segregation in the LGBT community, not just in the L, the B, the G and the T, but there's also segregation based upon race, sex and class," LB said at the summit.

The couple plans to use their planned Pride Celebration on the weekend of Oct. 11 to commemorate National Coming Out Day, and by then, they hope to have a fully operational shelter.

While the USDA is setting a positive example in stopping workplace discrimination, there is no federal law that prevents businesses from discriminating against members of the LGBT community.

"We are our own worst enemy," she said. "We don't know who will open up and talk to us because we've already shut down."

Robinson said the LGBT community is "all over the place" and agreed with LB that groups are separated or just nonexistent in the first place.

Daniel Ball, faith organizer at the Human Rights Campaign, is working to create a council of church worship leaders to discuss the church's role in being inclusive of the LGBT community.

"We have to help people understand the way the big picture affects them," Ball said. "This issue affects (everyone) whether they are heterosexual or homosexual."

Davis said her Rural Summit Series is a way to let the LGBT community aware of resources that the USDA has to offer.

"If you are an LGBT person living in rural America either by birth or by choice, you are inherently tough—you have to be," Davis said.

But just because you're tough, she added, doesn't mean it needs to be a way of life, and that's where the USDA grants and housing programs can come in handy.

For more information about housing programs or grants visit www.rurdev.usda.gov.