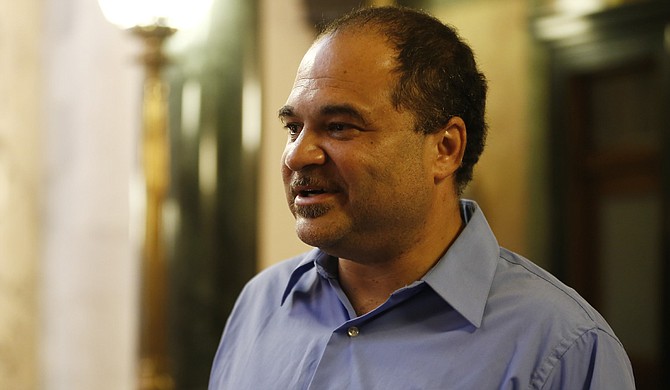 Democratic Party leaders are lining up behind Robert Gray (pictured), a 46-year-old truck driver who grew up in Jackson and Terry and won the party primary on Aug. 4. Photo by Imani Khayyam.

Reminiscent of the national electoral map that swept Ronald Reagan to a landslide second-term victory in 1984, the Democratic nominee for Mississippi governor won all but three counties. But unlike The Gipper, Robert Gray—whose CB handle is Silent Knight—didn't have the power of incumbency behind him and deployed no insidious race-baiting strategy to peel off disaffected parts of the electorate.

Overall, Gray won 147,043 votes in the primary for 50.9 percent of the vote. In some places, his totals were much higher. For example, he secured 68 percent of votes in Itawamba County.

Party officials aren't entirely clear on how Gray, who reported spending no money on his campaign, could win enough votes to not even force a runoff.

Rickey Cole, the chairman of the Mississippi Democratic Party, told Mississippi Public Broadcasting that Gray's name appearing first on the ballot combined with lack of enthusiasm for up-ticket races may have had something to do with it.

"They're not there for the governor's race. They came to vote in the supervisor's race or the sheriff's race or a superintendent's race," Cole told MPB. "So when they see these three names, and they say 'I don't know any of these folks,' they just check the first one, and then they move to the race (that) they've got some information about. That's basically what happened in this instance, in my opinion."

It was not for Slater's lack of trying. By Mississippi Democratic standards, she had a sophisticated campaign operation and hired seasoned Democratic operatives, such as Roosevelt Daniels, a familiar face on the Jackson political scene. She raised $235,068 during the cycle and spent $197,142 on staff, media advertising and printing costs.

Brandon Jones, executive director of the Mississippi Democratic Trust, which supports Democrats running for the Legislature, said that while he understands the frustration of many Democrats, he disagrees with the idea that Democrats failed to deliver a victory for their handpicked candidate.

Both his group and the state party decline to endorse candidates in the primary.

"Since when have you known Democrats to be go-along-to-get-along?" Jones said. "As a rule, we're not the party of back-room deals."

Jones says the Democratic Party is still rebuilding, similar to that of the Republican Party in Mississippi up until Gov. Kirk Fordice's victory in 1991. Jones said even though he's heard only a little from Gray, he's impressed with the candidate.

"If people get frustrated enough to get involved, then I'm all for it," Jones said.