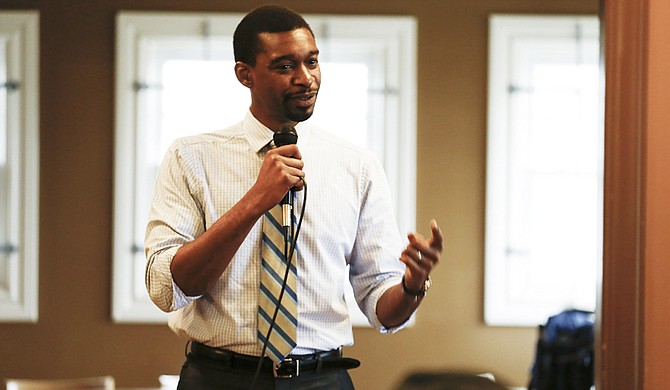 Ward 6 Councilman Tyrone Hendrix chairs the Budget Committee and is ready to make some unpopular decisions this budget cycle. Photo by Imani Khayyam.

Enterprise funds. General funds. Fund balance. You can't have any of these without "fun." For municipal finance wonks, there is no more fun time of year than annual budget negotiations that will result in a city spending plan for the next fiscal year.

This time around, the city's governing authorities—Mayor Tony Yarber and the seven-member Jackson City Council—will move to what's known as priority-based budgeting. Where many organizations, including government agencies, use previous budgets as a baseline, the thinking behind priority-based budgeting is to start at zero and force department heads to fight and scrape for every penny of funding they say they need.

So this time around, look for budget hearings to feel more like the grilling of diplomats at a high-stakes congressional hearing. Ward 6 Councilman Tyrone Hendrix said in an interview that he and his colleagues will be scrutinizing everything from the amount the city spends on utility bills to fuel for its fleet (currently $40,000 per week).

At the same, the city will also try to come up with a plan for closing a $15 million general-fund deficit and grow revenues to meet infrastructure needs, possibly by getting more aggressive with its collections on water and sewer bills and parking meters.

"We have to do what's right now regardless of 2017," said Hendrix, referring to the next scheduled city election. "It can't be a blip on the radar."

Budget talks are getting started a little earlier than normal this year, starting Aug. 10. State law requires cities to finish their budgets by Sept. 15 for the new fiscal year, which begins Oct. 1.

While in previous years, the budget negotiations have centered on what the city spends. Ward 4 Councilman De'Keither Stamps said he plans to have a lengthy discussion about revenues as well. For Ward 1 Councilman Ashby Foote, it will be the first time he's participated in budget talks since joining the council earlier this year. Foote, who won a special election to replace former Councilman Quentin Whitwell, campaigned in part on revamping the city's parking meters to provide a cash infusion.

"We leave a lot of money on the table in parking meters, figuratively speaking," Foote said. The hairiest challenge, however, is still in the water and sewer business administration, the city's biggest money maker.

Foote and others said they want to make sure the city is collecting what ratepayers owe to the WSBA, which makes up one of the city's enterprise funds. Last fall, in a report the city commissioned to examine several aspects of its water business, consultants discovered that aside from disconnecting people who don't pay their bills, the city lacks a good system for collecting money from its water and sewer customers.

Getting tough on scofflaws could prove unpopular with the citizenry, but members of the council say they're not concerned with that.

"I'm not worried so much about the popularity of the decision. I think what the people want is good stewardship over the sources of resources, that the money is being productively spent," Foote said.

Digital City: By the Numbers

Mayor Tony Yarber might be the most tech-savvy capital city chief executive in Jackson's history. It's not uncommon to see Yarber and members of his staff, usually men, sporting Bluetooth headsets around their necks, nor is it unusual to see a tweet from Yarber's account pop up during a city council meeting (to say nothing of his robust presence on Instagram). All of it was on full display at his second State of the City Address.

Before the speech, Yarber gave a private pep talk to a group of capital city-area students who recently hacked their way to some big prizes at a New Orleans competition. The audio-visual setup included a presentation of the city's slick "Bold New Vision" promotional video and an overflow room equipped with a large pull-down projector screen.

The city's digital swagger is all part of what Yarber called his administration's "responsibility to provide the best quality of life for its employees and citizens seriously," including a social-media presence that has driven views on the City's website up 286 percent this year over last year. Other numbers Yarber touted from his administration's efforts over the past year: 35,000 filled potholes, 39 paved streets and the approval of more than $13.8 million for major projects from the 1-percent local-option sales tax.

In addition, Yarber said, violent crime has decreased 13.8 percent since last June, and the city has seen a 131 percent increase in the closure rate for requests for board-ups, demolitions, and grass and overgrown-weed cases. In addition, 2.6 million visitors came to Jackson last year, and the mayor and his staff attended 47 ribbon-cuttings.

It wasn't without some tense moments between members of the council and Mayor Yarber, but City employees and their dependents will soon have their own health clinic.

The council voted 4-to-2 to authorize the mayor to craft an agreement with Biloxi-based Medical Analysis for a clinic staffed by two licensed practiced nurses and two nurse practitioners at the Metrocenter in west Jackson. Under the contract, Medical Analysis would receive $450,000 per year for two years; the city would also have to pay for rent. Susan Bogard is president of Medical Analysis.

Council President Melvin Priester Jr., of Ward 2, voted to support the clinic but only after going on record with his grievances that members of the medical community were not involved in the decision-making process.

Councilman Stamps also voted for the clinic, but said the city shouldn't rent space in Metrocenter because the city owns the former Dillard's building.

The City put out an request for proposal for the contract in early May, but received only one proposal, the mayor said.

"We should do something with the property we own," Stamps said, adding that the city could revisit the issue when Medical Analysis' contract is up in two years.