Legal Pot Initiative Gets a Spark 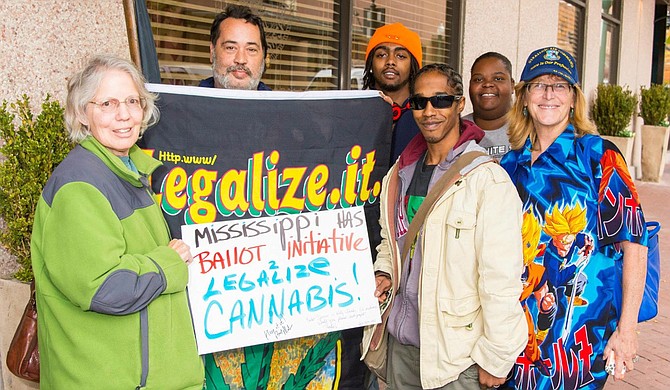 Despite the hard work of dozens of Mississippi volunteers and shifting national tide toward loosening restrictions on marijuana, a state ballot initiative to legalize cannabis is just hobbling along.

The proposed rule changes include full legalization and taxation of marijuana for adults over age 21.

Recreational users could have nine or fewer marijuana plants for their personal use. The state would classify anyone with more than nine plants as a cannabis farmer, required to pay an annual $25 fee to the local municipal or county.

Prospective dispensers would have to pay $1,000 for a special license. Additionally, a state sales tax of 7 percent would be charged on all sales with the exception of medical marijuana and industrial hemp.

To put the initiative before voters in 2016, organizers must collect 107,000 signatures from five districts across the state by October 2015.

Kelly Jacobs, a lead organizer with Initiative 48 from Hernando, said the group has faced a number of obstacles, everything from circuit clerks refusing to certify signatures to the misperception that law enforcement agencies will use the petitions to surveil and possibly arrest people for marijuana related crimes.

Jacobs said in Hinds County, for example, the circuit clerk's office has rejected a number of ballots from people who signed petitions, but are not registered voters. Because state law doesn't put time limits on when circuit clerks must certify signatures, Jacobs says the group has little recourse.

"More the half the signatures we've collected have been rejected by the circuit clerks," Jacobs said.

Soon, thanks to an angel investor, the clerk's offices may not be able to ignore Initiative 48 petitions much longer. Jeremy Buffard, a Jackson-area native and businessman living in Florida, recently upped the ante with what he calls a major investment in the medical marijuana industry in Mississippi.

"Now is the time to put a little fuel on the fire and really kick it into high gear."

Laws about paying signature gatherers vary from state to state. Mississippi banned the practice at one time, but a 1997 federal court ruling in the Term Limits Leadership Council v. Clark struck down the state's prohibition.

Buffard, who was born in Ridgeland and grew up in Gulfport, sees the ballot initiative as crucial to fostering the state's cannabis economy and a school he plans to open in the Jackson area to teach the marijuana business. Medical Marijuana United, a school Buffard founded in central Florida, provides a model for Mississippi. The Florida school has graduated 2,400 people in caregiving, commercial cultivation, management, and legal and medical studies.

In Mississippi, the courses would cost between $99 and $399 each; housing and meal plans will also be available on the site Buffard said he is still negotiating for the 152,000-square foot educational facility.

George Hodges is a farmer in Rankin County and said he has put together a group of fellow agriculturalists who want to grow industrial hemp, which he says is more stable than crops like corn, which can experience wide price fluctuations.

Growing industrial hemp is illegal in the United States. North Dakota, Hawaii, Kentucky, Maine, Maryland, Oregon, California, Montana, West Virginia and Vermont passed laws allowing for the commercial cultivation of hemp, but farmers in those states have been reluctant to do so because of the threat of prosecution from federal authorities. A bill brought forth by Rep. David Baria, D-Bay St. Louis, would have legalized hemp production in Mississippi, but the measure died in committee.

The volunteers working to put Initiative 48 on the ballot say it's a no-brainer and points to the success of other states. In Colorado, one of the first states to make selling weed legal, sales topped $700 million in 2014 with $63 million going into the state treasury as tax revenue and another $13 million generated from licenses and fees.

With Initiative 48, the marijuana school and Mississippi's fertile farmland, Buffard said Mississippians can earn supplemental income and the state could become a marijuana powerhouse.

"There's no good reason at this point to sit on the couch anymore. In fact, I think we've been sitting way too long, and I think it's time for a change on that," Buffard said.