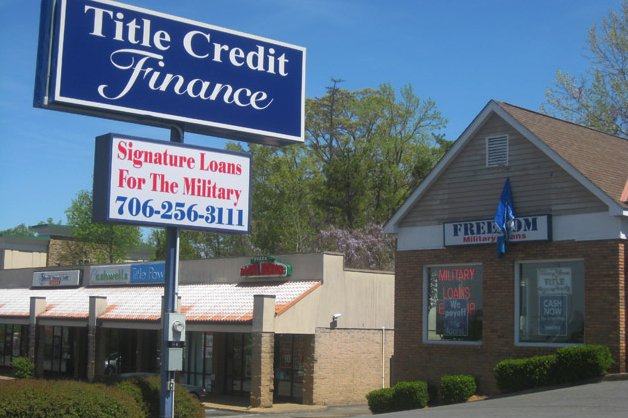 Title Credit Finance, which offers installment loans, is one of the businesses that would be impacted under new military lending rules the Defense Department is proposing.

The Department of Defense released proposed rules today targeting the practices of a broad range of high-cost lenders and prohibiting them from charging service members interest rates over 36 percent.

The new rules would overhaul the Military Lending Act, which, when enacted in 2007, narrowly defined potentially abusive loans. But as ProPublica and Marketplace reported last year, high-cost lenders easily circumvented the law by offering longer-term loans. As a result, those pitching payday, auto-title, and installment loans continued to peddle credit from stores lining the streets near military bases.

The new rules would have a substantial impact. A Defense Department survey earlier this year found that 11 percent of service members reported taking out a loan with interest above 36 percent in the past year. The survey also found service members were a prime target for such lending: generally young, not financially savvy and often stretched by trying to support a family on a tight budget.

In our story last year, we focused on the case of one Marine who, in order to borrow $1,600, agreed to pay back $17,228 to an auto-title lender over two and a half years2014 a loan at 400 percent interest. When he could not keep up the payments, his car was repossessed. Under the new rules, it would be illegal for payday and auto-title lenders to make such longer-term loans at steep rates.

The new rules would also restrict installment lenders, who aren't covered at all by the current law. Because of the law's exclusive focus on short-term credit, installment lenders have been free to charge service members interest rates far above 36 percent, as well as lard loans with nearly useless insurance products that serve mainly to boost the cost.

Installment lenders, whose loans typically extend for five months and longer, often provide loans to service members. World Finance2014 one of the country's largest installment lenders and the subject of an investigation by ProPublica and Marketplace2014 said last year that about 5 percent of its loans, or approximately 40,000, were made to service members or their families.

In a report last spring, the Defense Department, citing ProPublica and Marketplace's investigation, said installment lenders' practice of wrapping in pricey and unnecessary insurance products was one reason to extend the scope of the Military Lending Act.

While the new rules will have a very broad scope, there are two notable exclusions: residential mortgages and "purchase-money" loans, meaning financing to buy a vehicle or other personal property. (These are different from title loans, which offer cash and use a borrower's car as collateral.) The exclusions date back to the original Military Lending Act language, said Tom Feltner of the Consumer Federation of America: The law gave the Defense Department the power to define what sorts of loans are covered but excepted those two types.

ProPublica published an investigation earlier this year of one major retailer, USA Discounters, which has a large customer base of service members. The company's loans, made to finance electronics, appliances, and other sorts of purchases, also include add-on products that inflate the cost. Because the company makes loans to finance the purchase of its products, it wouldn't be affected by the new rules.

There will be a 60-day period to allow public comment on the proposed rule changes before the Defense Department can proceed with a final version.

Overall, the new Defense Department rules constitute a "strong and important step," said Feltner, but added that regulators will need to remain vigilant and respond to types of credit not covered by the new rules.

ProPublica is a Pulitzer Prize-winning investigative newsroom. Sign up for their newsletter.