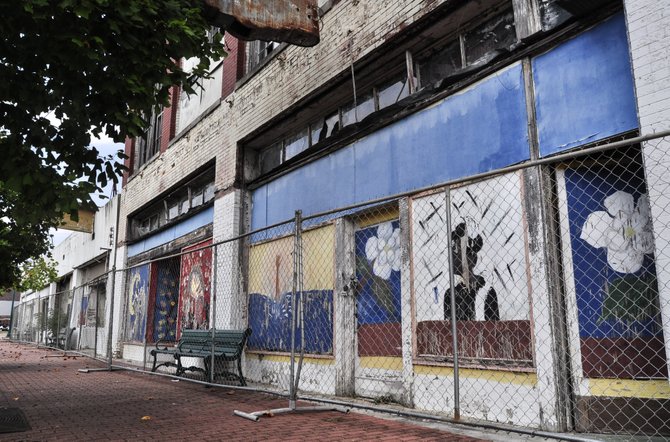 The Jackson Redevelopment Authority will have to spend more than $350,000 to make quick fixes to several buildings on Farish Street. Photo by Trip Burns.

Some Jackson Redevelopment Authority commissioners want to know if the authority can wash its hands of problem Farish Street properties by giving them away.

As the Farish Street revitalization project remains stalled amid legal wrangling and in need of costly temporary repairs, some members of the Jackson Redevelopment Authority are tossing around a new approach to the problem.

"Can we give it away?" Commissioner Mat Thomas asked at JRA's monthly board meeting Aug. 27.

Thomas' inquiry came during a presentation of a structural analysis on several JRA-owned buildings on Farish Street. Insurers have advised JRA that buildings in the 300 block of North Farish represent a liability in their current condition.

Two buildings that are side-by-side need $87,755 for asbestos removal, boarding up and other structural enhancements. Another building on that block needs an estimated $125,000 to support its roof, while another group of buildings will require more than $140,000 to stabilize them, JRA officials said.

Together, the repairs will cost more than $353,000. JRA—a quasi-governmental arm of the City of Jackson that can issue bonds for economic development—owns a number of buildings on Farish Street, part of a decades-old plan to turn into an entertainment district.

That plan has been a source of controversy and political tension in recent years. The JRA is currently embroiled in a legal fight with developer David Watkins, who had been working on the Farish Street project as head of a group called Farish Group LLC. Last fall, JRA cancelled the Farish Street Group's leases with JRA; in turn, Watkins placed liens totaling $5 million to recoup what he said was his own money that he sunk into the project.

Thomas, who joined JRA in 2009, questioned pouring public money into "a sinkhole that's unfillable," referring to the Farish revitalization. Unloading the Farish properties won't be easy, attorneys for the authority advised.

Farish is designated as a state historic district, meaning property owners must agree to meet specific building and construction guidelines. Additionally, JRA purchased the buildings with federal community development block grants to develop into an entertainment district, which could add another complicating factor to transferring ownership of the buildings to another owner.

The chapter of the Farish saga involving David Watkins, who redeveloped the King Edward Hotel and Standard Life Building, could soon come to a close. A mediation between Watkins, Dale Partners, the Central Mississippi Planning and Development District and JRA is scheduled for Oct. 8. Lance Stevens, a Watkins attorney in the lien dispute, said the parties would continue "exploring common ground" in the meantime.

Helping things along could be a shakeup in the JRA's leadership. Not only did the seven-member commission remove Bishop Ronnie Crudup as chairman and elect attorney Jennifer Johnson as his replacement, the board voted to remove the Jones Walker law firm and Zach Taylor as JRA's board attorney. Pernila S. Brown will take over Taylor's duties as board attorney.

Clearly incensed by the move, Beau Whittington, who represents Ward 1, said "it would be a shame for this commission not to have the experience and institutional knowledge Zach Taylor brings to the table."

Crudup, also pastor of New Horizon Church International, said relieving Jones Walker would be "ineffective" and "financially imprudent." Thomas said he believed the board has received bad legal advice and that it was time to make a change. Johnson said she was concerned about conflicts of interest with other Jones Walker clients.

Last fall, these conflicts became central in the legal tug-of-war between developer Watkins and JRA. In addition to serving as JRA's attorneys, Jones Walker is currently representing Retro Metro LLC and its principals Socrates Garrett and LeRoy Walker in four suits, including at least one against Watkins.

The firm is defending Retro Metro in three of those suits against contractors who say they have not been paid for performed work, and the fourth against Watkins and his firm Meridian Law Enforcement Center LLC.

Crudup himself is also involved in the questions about Jones Walker's impartiality in representing JRA.

In a December 2013 deposition in the ongoing dispute, Crudup said he owed Garrett $500,000 for construction of New Horizon Church International's facility at 1750 Ellis Ave. Garrett is also a partner in the Farish Street Group.

Read more about the Farish Street legal saga at jfp.ms/watkins.