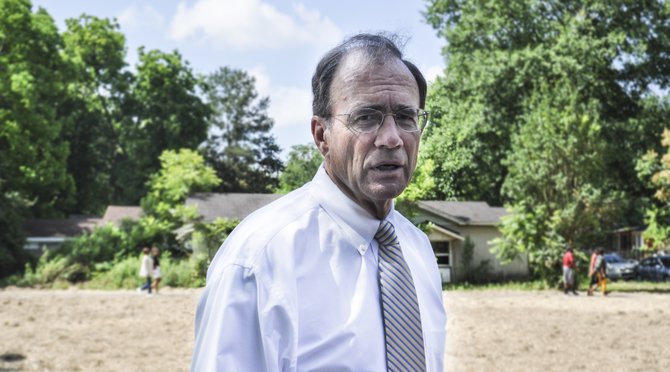 Mississippi Secretary of State Delbert Hosemann has been a vocal advocate for the state's voter ID law. Photo by Trip Burns.

Two of those came from federal courts that ruled against voter-ID laws in Wisconsin and Texas; the other resulted from a congressional research agency that confirmed what civil-rights groups have claimed all along, that voter ID in some states are barriers to African American and youth voters.

First, the U.S. Supreme Court prohibited Wisconsin from enforcing its voter ID. The page-long order did not specify a reason for the ruling, but legal experts speculate that the fact that Election Day is less than one month away had a lot to do with it.

The widely read SCOTUS blog noted that dissenting Justices Samuel A. Alito, Jr., Antonin Scalia and Clarence Thomas conceded that "there is a colorable basis for the Court's decision due to the proximity of the upcoming general election."

Alito, an appointee of President George W. Bush, wrote that he was particularly troubled "that absentee ballots have been sent out without any notation that proof of photo identification must be submitted."

Meanwhile, on the same day as the Supreme Court ruling, a federal judge in Texas also struck down that state's voter ID law, saying it "creates a substantial burden on the fundamental right to vote, has a discriminatory effect and purpose, and constitutes a poll tax."

"Legislators' knowledge that SB 14 would clearly impact minorities disproportionately and likely disenfranchise them shows that SB 14 was racially motivated," she wrote.

Also, earlier this week the Government Accountability Office released findings of a study of voter-ID laws in 17 states, including Mississippi. The report indicates that some of the the laws impose hidden costs on voters, which may drive down turnout, especially among African Americans and voters under age 23.

Sean Young, a staff attorney with the Voting Rights Project of the ACLU, which submitted a brief with the Supreme Court about Wisconsin's voter ID requirement, said the decision affirms the ACLU's position

"We argued that implementing a voter-ID law in Wisconsin at the last minute would cause widespread chaos and disenfranchisement," Young said.

Young said neither of the rulings is immediately binding on Mississippi, whose voter ID law went into effect in June for congressional party primaries, is as strict as those in Texas and Wisconsin.

Texas plans to appeal the district court's ruling to the 5th U.S. Circuit Court of Appeals, which also covers Mississippi.

Read an archive of the JFP's award-winning coverage of voter ID at jfp.ms/voterid.

We have to show identification to buy alcohol, tobacco, write checks, use debit/credit cards, visit in prisons, etc and there isn't a problem, so why is it a problem to show an identification to prove that you are in fact who you say you are to cast a vote? Makes no sense. Since the voter rolls aren't kept up its easy to vote three or four times. Maybe casting multiple votes helps the integrity of the election??

This argument is a little tired, as it seems to willfully overlook the weakness of the comparsion. The assumption is that it's "easy" to show ID to make these everyday transactions. But the argument ignores the clear and remarkable differences between voting and everyday purchases or transactions, to a point that I find, frankly, a little disconcerting coming from members of a democratic society.

1.) Voting is a fundamental right, and one where there's a legal tension over creating undue hardships, regulations and disincentives (poll taxes, literacy tests) in order for a person to quality.

2.) As far as I'm aware, no one is required to head down to the county courthouse and register to purchase alcohol and tobacco, thus placing your residence and signature on file with the authorities.

3.) When you purchase alcohol and tobacco, you aren't required to do so at a specific purchasing precinct where your name and address are on a roll; nor are you required to sign your name to complete the purchase.

4.) If you're turned away from a store that misreads your valid ID and disallows you from purchasing alcohol or tobacco, you generally have the remedy of going to a different store and purchasing there.

5.) Identification is used in financial transactions to combat a different type of fraud than one generally finds in voting; ID is used to verify age for tobacco and alcohol sales; for a credit card transaction it would be used to verify that the name on a photo idea matches the name on the credit card. There's relatively little voter fraud that would be mitigated by showing a photo ID; most voter fraud happens at the registration level. (The GW Bush Administration went hard after it in the 90s and came up with a handful of cases. http://www.nytimes.com/2007/04/12/was...">http://www.nytimes.com/2007/04/12/was...)

There are more reasons why Voter ID is a bad idea... it does cost money to get ID if you don't have ID and/or the supporting documents, it's not clear what happens if you haven't updated your ID after a move or birthday or expiration; you're placing that decision in the hands of someone who probably has minimal training and/or is feeling pressure from politically motivated poll watchers.

That is exactly the problem with requiring an ID and background check to purchase a modern firearm. Before the Firearms Control Act you could buy a gun through the mail. The farther the Constitution recedes into the past, the better we understand our rights, it seems. Today's more enlightened politicians understand that the 2nd amendment doesn't REALLY mean RTKABA.

" and one where there's a legal tension over creating undue hardships, regulations and disincentives (poll taxes, literacy tests) in order for a person to quality."

I'm not sure what you mean, unless it involves citizenship requirements?

"2.) As far as I'm aware, no one is required to head down to the county courthouse and register to purchase alcohol and tobacco, thus placing your residence and signature on file with the authorities."

I'm not sure what registering to vote has to do with voter ID?

3.) When you purchase alcohol and tobacco, you aren't required to do so at a specific purchasing precinct where your name and address are on a roll; nor are you required to sign your name to complete the purchase.

This is the existing practice - again, what does it have to do with Voter ID?

"4.) If you're turned away from a store that misreads your valid ID and disallows you from purchasing alcohol or tobacco, you generally have the remedy of going to a different store and purchasing there."

Misreads?! Are you serious? Like you wouldn't point out the error, as opposed to slinking off to another liquor store, defeated by the cashier's lack of reading skills.

"5.) There's relatively little voter fraud that would be mitigated by showing a photo ID; most voter fraud happens at the registration level."

That remains to be seen. I'll put this in the "maybe" column.

All these arguments are very flimsy - is there an unstated reason why you don't want voter ID, or are you merely repeating the party line? Your next argument (here it comes...) will be that those who support ID intend to disenfranchise certain members of our society.

As I've mentioned on more than one occasion, I'm always surprised by the relative lack of coordination among supports of the Voter ID movement and the very similar proposal to license gun owners in the U.S.

Isn't the logic the same for what I like to call the "2A-ID" proposal? It's simple -- let's federally require training and licensing of gun owners -- and the registration of all owned firearms, associating them with that licensed owner.

The result would be a valid photo ID that must be carried at all times by anyone who wishes to purchase, carry or transport any sort of firearm and/or ammunition on his person or in vehicle.

After all -- you've got to have a license to drive a car. Why would you bristle at the idea of getting a license to own and use a gun?

Because the government could then use that ID to find them, take their guns and ship them off to FEMA camps.

Its amazing how competent the government becomes when these myths are trotted out isn't it?

Mr Stauffer, way before any voting rights were issued and cars were not even dreamed of, of the ten original bill of rights the SECOND one is the right to bear arms with NO mention of training or licensing.

@tsmith No mention? "Well-regulated militia" sounds like training to me.

Well then, I guess that solves it. :)

Why would you bristle at the idea of voter ID?

Why would you bristle at the idea of gun owner ID?

(And, for the record, I already spoke to the Voter ID issue in some detail up-thread.)

@ tstauffer - I see you got a handle on this one, LOL!

Todd broke it down to you guys from A to Z - I'm sorry - but he is super right on this one.

Apparently, sarcasm and humor don't communicate. 1. Most people that want to arm themselves will claim that the government is incompetent and useless. 2. Yet, when the idea of a ID for firearms comes out, all of sudden, the government becomes super competent and able to confiscate weapons at will and whisk their owners off to FEMA concentration camps.

What I could never understand is why Mississippi did not redesign their Voter Registration Card to provide for a photo? And if you needed an updated photo, why they don't have deputy voter registrars in each DMV office who can check and update your driver's license as well as your voter registration card. It would seem like a win-win. What? The state can't afford cameras and processing equipment for 82 counties? They always seem to find it for every other foolish project that gets "pushed."

I have no problem with permits and/or registration of my guns. Since the government of the United States is the largest arms dealer in the World, I doubt it needs mine and has more and better than I have for sure.

I think we need to worry more about the spread of military weapons in civilian or police hands, and the attitude that every situation is a nail and the military and military weapons are the hammer. I am constantly surprised by men and women on the Internet with really unvarnished, unthoughtful opinions that show a limited world view and an unpractical manner of approaching human problems.

Sometimes, I get into a discussion and emerge with a different viewpoint if several intelligent, thoughtful people trot out their solutions that sound as if they have explored the topic in more than reflex action.