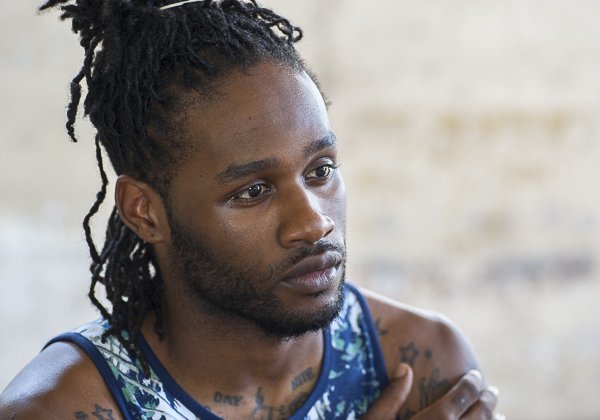 Local rapper J. Skyy’s experiences inspire him to look for meaning and lyrics in everyday life.

Within the hip-hop and rap communities, music is often a matter of what you represent. For some, it's a city, status or belief, but for Jackson-based rapper Jared "J. Skyy" Moering, it's about representing himself. His official debut, "Love Is War," is a melding of self-realization and reality, but it took a few years, a few mixtapes and a break-in to get here.

J. Skyy was introduced to rap when he was about 8. He would play tracks from Tupac, Notorious B.I.G. and Jay Z, and mimic his musical idols. It wasn't long before he were attempting to write his own lyrics.

"I would hear these stories in the music, and it was stories I was kind of used to," J. Skyy says. "They would say something and the way they would say it, I could tell it was real."

"Real" became the keyword in his music. While many rappers write "fake it 'til you make it" lyrics, prophesying wealth and fame before they've received either, J. Skyy bases his music on daily life, finding meaning in the mundane.

"I write about everything that I do, from waking up and turning the TV on to watch the news or when I'm going to work," he says. "I try to stay in real life when I write."

In "Love Is War," J. Skyy breaches the topic of relationships and the danger of opening yourself to others, romantically or otherwise. It's a heavy subject, but he knows listeners can connect with it in a profound way.

"I feel like, in love, people shoot at you, people hurt you, and people pick up your heart and drop it a few times," he says. "We're all out here fighting for love."

That fight has taken several forms for J. Skyy over the years, and he's seen his share of obstacles along the way, some of which fundamentally changed his approach to music and songwriting. The first hurdle came in 2007 while he attended Mississippi State University, studying to be a physical therapist. While J. Skyy was visiting friends in Jackson over a weekend, a vandal smashed his car window, and stole his lyrics and song ideas.

"I had a lot of notebooks and notepads that I used to write all my stuff in. Somebody broke into my car at a club and took everything," he says. "When that happened, I was devastated, so I told myself I wasn't going to write anything down anymore."

The theft caused him to rethink how he compiled his lyrics, and he developed a new system that ruled out the need for notebooks. Once J. Skyy forms his take on an experience, he writes it into his phone. By the end of the week, he often has 10 meaningful topics, and he looks for connections between them to craft a cohesive song. Most of the lyrical heavy lifting doesn't get written down.

Then, in 2009, J. Skyy's mother, who was diagnosed with lupus, became even more ill. As her condition worsened, he realized he couldn't stay in Starkville while his mother struggled in Jackson. "I didn't even finish," he says of his time at MSU. "I couldn't. I felt like I needed to be closer to her."

All the while, J. Skyy prepared for "Love Is War," slowly amassing tracks. Even though his debut full-length will be the first time many listeners hear his music, J. Skyy feels he's already been successful by making it happen at all.

"I was kind of afraid to not be accepted at first, but I know I only felt that way because I hadn't accepted myself," he says. "But it's coming from a genuine place. We all have problems. The person you might aspire to be has problems. You have to accept you for you. That's the only way to make it in life."

"Love Is War" is available for purchase and streaming on iTunes and Spotify on Oct. 7. For more information, visit skyysohigh.com.