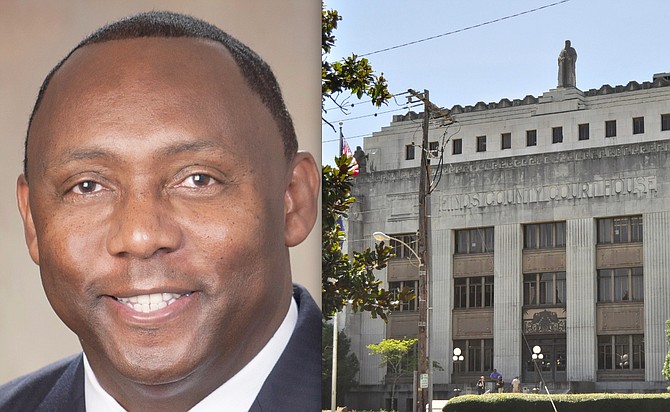 The federal indictment against Christopher Epps, unsealed Thursday in U.S. District Court in Jackson, alleges that he accepted more than $700,000 in bribes from Cecil McCrory.

Christopher Epps, the long-tenured commissioner of the Mississippi Department of Corrections, and former Rankin County School Board President Cecil McCrory will be arraigned later today on a 49-count indictment in Jackson.

The federal indictment alleges that Epps accepted more than $700,000 in bribes from McCrory. The indictment, unsealed Thursday in U.S. District Court in Jackson, also charges McCrory of Brandon and says that he paid Epps to obtain contracts for himself and other companies.

The charges outlined in the indictment began seven years ago, in November 2007, when Epps signed a no-bid contract with G.T. Enterprises for commissary services at state prisons.

That year, McCrory paid Epps $3,000 to $4,000 on about 15 occasions in exchange for the contract that McCrory's company's had with MDOC. That contract was later transferred to St. Louis-based Keefe Commissary LLC., which resulted in a large profit for McCrory, the indictment states.

Sometime in 2008, Epps asked McCrory to pay off the mortgage on his home. Between July and October 2008, McCrory purchased two cashier's checks totaling $200,000 payable to Countrywide Bank, which held Epps' home mortgage. Later that year, Epps signed a lease between MDOC and College Street Leasing to operate a new inmate transitional facility in Walnut Grove, Miss., where MDOC has a prison that is privately run.

After several more payments, the indictment alleges, "Epps told McCrory that McCrory could get anything he wanted in the future from MDOC through Epps."

The indictment says McCrory was a paid consultant for companies that received contracts from the Corrections Department to run private prisons, including Cornell Group, GEO Group and current contractor Management and Training Corp. The companies were named in the indictment but not charged.

In addition, the indictment claims that Epps filed bogus federal income tax forms that did not accurately reflect his earnings.

Epps, 53, resigned abruptly Wednesday. The letter of resignation he submitted to Gov. Phil Bryant did not state a reason for the unexpected departure, nor has MDOC made one public. The Clarion-Ledger reported that federal officials seized Epps' Flowood home, a beach house on the Mississippi Coast and several automobiles.

This is very sad. It doesn't sound like there were any shades of grey here, just plain old fashioned bribery and corruption.

This is a big story.

It makes you wonder how legislators will debate moving some state-run functions to privatization?

So it really is a big story in that in regard.

Where is the review of ALL state NO-BID contracts? Do we believe that this is only occurring at MDOC. MDA has handed out many NO-BID or FAKE-BID (when the outcome is already known) especially with the Katrina Funds. Just look at the tall building on Highland Colony in Ridgeland. Hmmm