Funding Cuts Could Put Women and Children Out 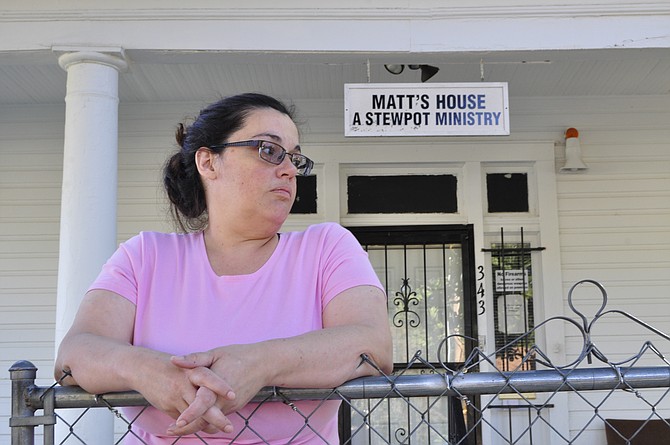 Samantha Stevens was evicted from her home in Rankin County prior to finding a home at Matt’s House, which may have to close. Photo by Trip Burns.

A woman who has been living at Matt Devenney Emergency Shelter for two and a half weeks doesn't know where women will go if Stewpot does not receive the funds necessary to keep the shelter open. For now, Matt's House, as well as Billy Brumfield Emergency Shelter, are scheduled to close Nov. 15.

The woman, Samantha Stevens, was evicted from her home in Rankin County prior to finding a home at Matt's House. Her face lights up when she talks about the two supervisors at Matt's House, who provide a welcoming community for women and children in need.

She spent a week, and the very last of the money she had, at a hotel before finally finding an open bed at the shelter. If it hadn't been for Matt's House, she said she'd likely be on the street. "We still need emergency shelters," she said. "What about right now? What about people that need (shelter) immediately?"

For Stevens, Matt's House, which provides housing to homeless women and children for 14 days, was the only place she could go. (She requested and was granted an additional 14 days from the shelter).

Other emergency shelters were either full or don't house women. Transitional shelters, which provide extended stay but require clients to have referrals, are not helpful for people in crisis who need shelter immediately.

Christie Burnett, director of Stewpot's Opportunity Center, said that getting women into shelters on the spur of the moment "isn't going to happen" anywhere other than Matt's House.

Additionally, Stewpot shelters are the only ones that don't require a TB card that shows that a person is cleared of tuberculosis. To get one, a person has to get to a hospital, which can be hard for a homeless person without transportation.

"The revisions in the regulations changed the program focus from addressing the needs of the homeless people in emergency or transitional shelters to assisting people to quickly regain stability in permanent housing after experiencing a housing crisis and/or homelessness," Henderson wrote in an emailed statement in response to an interview request, which the City declined.

This move accounts for a $140,000 cut to Stewpot's ministry. Executive Director Frank Spencer says Stewpot lost $90,000 in city grants—called Emergency Solutions Grants—as a result of a spending regulation from HUD. The organization also lost a direct HUD grant of $50,000 to Matt's House.

"No more than 60 percent of a grantees' fiscal year total allocation can be used for Emergency Shelter activities," Henderson wrote in the same statement.

Ward 2 City Councilman Melvin Priester Jr. said that before this new rule, the city could have spent 100 percent of its grant on emergency shelters and, according to Henderson, they did.

Rapid rehousing agencies place homeless people in housing and provide services to them while they are in the program "that hopefully will enable them to get housing and food and clothing ... counseling about jobs and medical services," Spencer said.

The difference is, people who are homeless can get immediate shelter at emergency shelters as opposed to working with an agency to be placed in housing.

Carol Burger, President of United Way for the Capital Area, said the organization simply did not raise enough money to contribute the amount of money to Stewpot as they have in the past. Last year, United Way gave $30,000 to Stewpot. This year, they were only able to give $2,000.

United Way, which is funded through different companies who run United Way campaigns and corporate and individual donors, was short $500,000 this year and had to make difficult decisions about which programs and areas to prioritize.

"Stewpot was one of the programs that we just didn't have the money to invest (in), which was a hard decision to make ... when you don't have the resources, you just don't have them," Burger said.

On Oct. 28, Mac Epps, president and community organizer of the voter-participation program Mississippi MOVE, held a press conference outside Matt's House to urge community members to help anyway they can.

Sen. Hillman Frazier, D-Jackson, who attended to show support for the shelters, reminded the community that anyone can find themselves in hard times. "All of us are one step removed from needing these services," Frazier said, adding that homelessness is especially rampant in Jackson.

Spencer has also requested $100,000 from Jackson and $100,000 from Hinds County. The city council and board of supervisors are currently discussing this proposal.   "I've got encouraging words from individual council members and from supervisors but they haven't taken any official action at this point," Spencer said.

Priester said representatives from Stewpot made a presentation to the city council and the councilmembers are searching for a way to help the emergency shelters.

"There has not been a clear source of additional funding that we've been able to identify. We are still working closely with the administration, though, to try to see if we can figure out where to find some additional funds for Stewpot," Priester said.

Meanwhile, Stevens said she has acquired a new job that she will begin on Nov. 17, just two days after the shelter is set to close. "Hopefully, I'll already have something," she said, laughing sadly when asked what she'll do if the shelter closes. But she worries about the women who could find themselves homeless after the closure.

"You don't know who could be out in a car, under a bridge. It could be a mother and her children staying in a car," Stevens said.