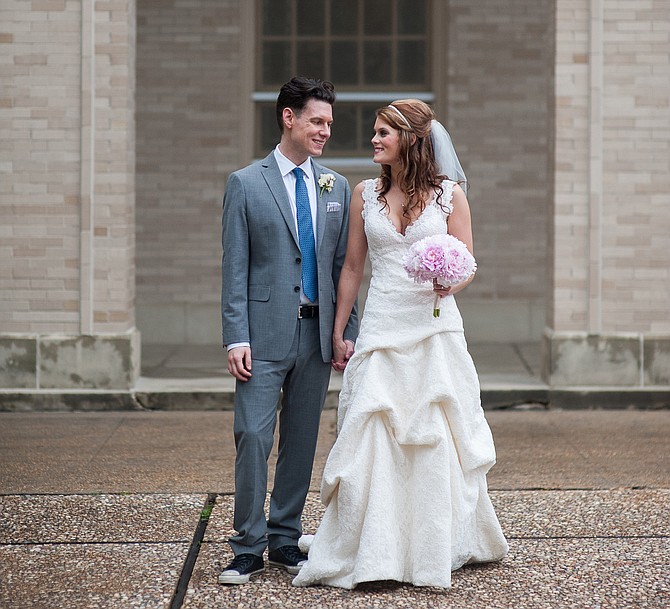 How it All Began

The love story of Nell Knox and William Goodman began in June 2011 at a mutual friend's house. "The first day we met, we ended up talking for about three hours," Knox says. "Immediately, I wanted to get to know this guy better."

Goodman felt the same chemistry during their first encounter. "I didn't know if I had a chance, but I wanted her to be in my life," he says.

As their relationship developed, Goodman and Knox grew to trust and respect each other. "Nell is the most beautiful person I've ever met ... inside and out," Goodman says.

After dating for two and a half years, Goodman proposed to Knox using one of her favorite books, "Slouching Towards Bethlehem" by Joan Didion. He added a special touch by personalizing it with his love story.

The round-cut diamond on a six-prong setting turned out to be Knox's dream engagement ring. "It's not vintage, but it has an old-fashioned setting," she says.

Together the couple planned their small, intimate wedding and set the date for June 1, 2014. Knox recalled meeting Goodman in the same month a few years back. "There's just something about June," she says.

On the day of the wedding, photographer Will Jacks began the photo shoot by capturing pictures of the couple holding umbrellas on the roof of Fondren Corner.

"It rained during our photo shoot," Knox says, but she didn't let the rain discourage her. "It's considered good luck to rain on your wedding day."

The photo shoot continued at the Capri Theatre. The couple found their names adorned on the old historical theater's marquee. The pictures concluded in the chapel at Galloway United Methodist Church in downtown Jackson The couple exchanged vows in front of three ministers, the Very Reverend Edward O'Conner, dean of St. Andrew's Episcopal Cathedral, and the Reverend Doctors Joey and Connie Shelton of Galloway United Methodist Church.

After the ceremony, guests left the chapel, and Knox prepped for the reception, removing wedding attire that included a special headband. "Molly Gee of Jackson made the veil and headband," Knox says. "She named the headband, The Nell Headband, after me."

Overjoyed, Goodman and Knox arrived at the reception at Walker's in party attire. The family-only seated dinner had a preset menu by Derek Emerson, the owner and head chef of Walker's and a good friend of Goodman.

After dinner, guests indulged in Italian-cream cake, a favorite of the bride and groom.

Goodman and Knox's officiants blessed the couple with prayers. Goodman's father, Will Goodman, serenaded them during the toast with his own original lyrics. Goodman's mother, Nan Grave Goodman, presented them a gift book filled with memories of how the couple met, and Knox's grandmothers gave special toasts.

Afterward, the couple extended the celebration privately on a flight to Cabo San Lucas, Mexico, where they stayed for five days.

Goodman and Knox define marriage as a commitment to working things out. They strive to keep an open mind and have no plans of settling into predefined roles.

"There's no competition," Goodman says. "She knows my weaknesses. I know her weaknesses. We just flow in a rhythm. We jam."

Because they are self-employed, Goodman and Knox work long hours. He is an artist; she is a writer and teacher.

Both are independent with a strong work ethic, and they believe in the supporting one another. Knox's November book release for "Studio Jackson: Creative Culture in the Mississippi Capital" (History Press, 2014, $22.95) is just as important as Goodman's art shows.

"We're best friends who passionately love each other," Goodman says. "We work together. We have a lot of trust, and we always make time for each other. We put each other first."