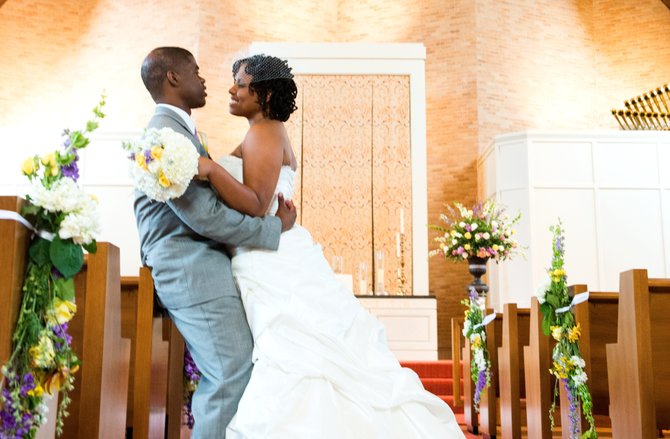 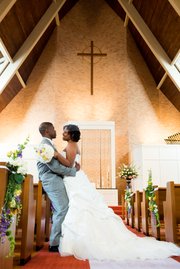 These were the words my childhood best friend Chelsi Amelia West casually told  J. Michael Ohueri soon after their first date. Nothing personal—just a preemptive statement of fact. At the time, Chelsi was preparing to leave Austin, Texas, where the two reside, and return to her native Jackson for the summer.

It wasn't more than a few weeks before she countered her own philosophy.

"She called me every day," says J. Michael, 28, a prosecutor in the Travis County Attorney's Office in Austin. "I called her one day, and she's like, 'I'm on my way to Austin. ... I just decided to come down.'"

I guess she broke her own rule about being clingy.

Chelsi and J. Michael's relationship began when the attorney logged into his eHarmony account—ready to cancel his subscription—only to find he had "like 100 page views" from some "questionable" young lady, he says, knowingly gazing at 27-year-old Chelsi, who is resting her head on his shoulder and laughing heartily. This gaiety is inherent to the couple's relationship and makes time spent with them all the richer.

Chelsi, a doctoral student in anthropology at the University of Texas, takes a breath from her school-girl giggles to set the record straight: "We met on eHarmony; he sent me a message. While a little hesitant at first, I responded, and we went on our first date within that week."

That date went well; the couple saw each other five more times the following week before she left for Jackson. Seven months later, J. Michael proposed atop Mount Bonnell in Austin. This June, the two married at Covenant Presbyterian Church in Jackson, where I stood alongside eight other bridesmaids and two maids of honor to watch our best friend's wedding.

Chelsi and J. Michael both wanted their wedding to emphasize the union of two families. Elements including family remarks during the ceremony brought this concept home. Chelsi composed a moving letter to her father, who died in 2012, which family friend Mary King read before the nuptials. She also wore miniature framed pictures of her and her father on the backs of her satin heels so he could still "walk me down the aisle," Chelsi says. "One of my main concerns was to make sure I was still involving his memory and honoring his life, too."

The couple selected wisteria purple and canary yellow as their wedding hues as an homage to Chelsi's father, who was a member of Omega Psi Phi—the fraternity's colors are purple and gold. Chelsi's younger brother, Gerald—who is a member of the same fraternity and shares his father's name—walked her down the aisle.

J. Michael and Chelsi held hands, gazing at each other during the ceremony. In a nod to Ohueri's African roots—his father is from Nigeria—the couple jumped the broom after being presented as Mr. and Mrs. Ohueri.

Although many women dream of the perfect ceremony down to the details, Chelsi says she's always been focused on an important aspect of the reception.

"Growing up, I never thought, 'I want this kind of wedding dress' or 'I want these types of flowers,'" she says. "But I knew without a shadow of doubt what my playlist was going to be—I had a Microsoft Word document."

Chelsi and J. Michael's first dance was to Larry Graham's "One in a Million You," while the groom and his mother danced to Boyz II Men's "Mama." Chelsi took to the floor with her mother, Janice, and brother to "Love" by Al Green.