Silencing Our Fear of Youth 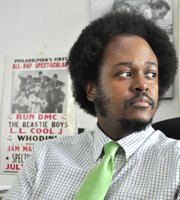 One of my earliest obsessions was with a gun.

It was probably summertime when a now-defunct company called Entertech rolled out its line of motorized, battery-powered water guns. My best friend, Lawrence, and I badly wanted Entertech guns of our own.

Probably without much prodding, our parents agreed. On a trip to the toy department, I picked out my weaponized squirt pistol, the AK Centerfire, modeled on the TEC-22 submachine gun with two refillable clips to hold water.

Entertech's tagline—The look! The feel! The sound, so real!—was spot on. The first generation of the guns, the ones Lawrence and I had, were so realistic that some people used them in actual bank robberies. That also led to numerous reports of law-enforcement officers shooting kids whose water guns were mistaken for the real things.

Later, Entertech redesigned the toys to be painted with splashy neon colors with orange plastic glued into the barrels. We were proud that we had the original guns, but eventually boys discovered that the orange plastic piece could be removed easily with a pair of pliers, and the guns spray-painted to restore them to their menacing appearance.

Guns have always been a part of my life. Not because I come from a gun tradition per se—my father has always owned a gun, and I shot them as a boy, for sport—but because I am an American.

And so we find ourselves rehashing the same solutions: getting all the men together to hash out a plan for dealing with the kids we all helped create. I don't have a lot of faith in the long-term effectiveness of such strategies for a simple reason: In America, little boys learn that guns are the solution to a problem, whether it's the summer doldrums in the case of our Entertechs to a disturbed man's history of romantic rejection to a foreign-policy stance that relies on war to protect (or further) our national interests.

I'm not guiltless in this.

One night last fall, I heard sudden commotion outside my front door. It was well past the time when anybody I know would make an unannounced visit, so in the active imagination of an American boy, the only thing it could be was a threat. I grabbed a gun. At some point, as I stood in a darkened room holding a shotgun, I realized that I was probably being ridiculous and put the weapon away.

I figured out later that around the same time, a young black Michigan woman named Renisha McBride crashed after a night of drinking and sought help from a nearby homeowner, who reportedly mistook her for a burglar and shot her. The incident—like those of Trayvon Martin and George Zimmerman, Jordan Davis and Michael Dunn—touched off a national debate about white supremacy and black people's right to exist in America.

No one who knows me would describe me as a white supremacist, a trigger-happy gun nut or a misanthrope (nor do I consider these terms interchangeable), yet Wafer's reaction to the sound of stirring outside his front door—his solution to his problem, his fear—was the same as mine.

This issue is all about uplifting black boys (See "Lifting Up Black Boys," page 14), but it's hard to empower black boys when we are so invested in constantly tearing them down.

Indeed, Jackson has had a lot of gun violence—too much—in recent weeks, which have prompted all the usual calls to "Stop the Violence" and "Take Back Our Streets." In many cases, these platitudes are directed at young men who grow up receiving toy guns as birthday presents in a country where nonexistent weapons of mass destruction are a reason to go to war and we pretend not to understand why they also view the gun Option No. 1 for effective conflict resolution.

Of all the recent murders, perhaps no loss was as crushing as that of Armon Burton. At age 3, Burton was killed in a hail of gunfire after some people in his neighborhood quarreled, reportedly, over a missing dog, and exchanged some 30 bullets. Burton's baby-tooth-filled smile across his cherubic brown face makes him a convenient cause celebre.

I can't help but wonder what would happen to little Armon had he lived through the trauma of that night.

Harvard researchers looked at the phenomenon of stress in a working paper published this year titled "Excessive Stress Disrupts the Architecture of the Developing Brain." They note that repeated or prolonged exposure to environmental stressors "may overproduce neural connections while those regions dedicated to reasoning, planning, and behavioral control may produce fewer neural connections." Over time, "This wear and tear increases the risk of stress-related physical and mental illness later in life," the researchers found.

Would we be as sympathetic a decade or more down the road if, after years of exposure to trauma and other environmental stressor, a teenaged Armon Burton picked up a gun and, in defense of himself and his neighborhood—or out of sheer fear—took someone else's life?

I know the answer to this question because I listen when people talk about teenagers who participate in gun crimes as deserving of the longest and harshest sentences allowable under the law because they were "old enough to know better."

But look at who their teachers are—us. As Albert Sykes, a 30-year-old youth activist, told me last week, too many of the people who invest all their energy into shaking their heads about youth crime and want to take stand against violence also refuse to live and move with and be engaged with youth.

"We have to deconstruct our fear of youth," he told me of our generation.

And in doing so, maybe we will also silence the fear in ourselves.