I Don’t Feel Welcome in Mississippi 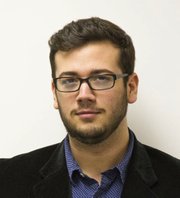 Twenty years ago, Debra Allen and her friends were kicked out of a restaurant after a family complained, saying they thought it was a "family" restaurant.

"Here I stand today, fussing about the same damn thing. I'm a 58-year-old Mississippian from birth. I pay my taxes. I generally obey the law," she said, stirring up laughter. "I don't deserve this. I don't deserve to be thrown out of a restaurant because they don't like the way I look or the fact that I'm sitting with five women."

Atop the 16 steps of the dust-colored Mississippi Capitol, Allen stood along with protesters—some holding signs while others shoved their hands in their pockets to keep warm. It was quiet. No breeze shook the skeletal trees. Most was gray except for the bold proclamations painted and sketched on the protesters' signs:

LET GOD BE THE QUALIFIER

LIBERTY AND JUSTICE FOR ALL HB2681

I was there to report the vote of Senate Bill 2681, otherwise known as the Religious Freedom Restoration Act, and as a gay Mississippian, I wanted nothing more than to join my own community and hold a sign as high as I could possibly reach. I wanted to bang on doors, glare at passing senators, wear a rainbow flag on my back and tell people to call me Super Gay.

But, of course, being a journalist and what not, I had to follow those things called "ethics."  The bill, in the form it was in before it reached the House, included vague language that opened doors to discrimination and slammed them in the face of LGBTQ citizens.

Having lived in Mississippi my whole life, a lot of things have been not cool. Add being gay to that, and you have the formula for a whole bunch of uncoolness.

Don't get me wrong, Mississippi can be great. I have fantastic manners (except that I'm a chronic burper), I can deal with humidity, and my accent wows people even though I try to rid of my inevitable drawl.

But if you're gay and living in Mississippi, you have to play a character. We'll call him Johnny Boy.

Johnny Boy shops at Reed's, searching for the most masculine-looking Columbia jacket to go over his simple button-downs. Sometimes Johnny even likes to wear hats because all his uncles do. And his uncles are real men, after all.

Johnny "likes" to watch football, even though all he wants to do is flip through the latest issue of Vogue while listening to Whitney Houston, quietly humming to himself.

Johnny went to a conservative high school where he was made fun of for trying out for musicals, so instead, he hangs out with his bros and talks about chicks. He just really wants to sing. That's all.

He wants to express himself.

All gay Mississippians have a little bit of Johnny Boy in them. We've had to cloak ourselves, don our straight-boy-who-has-to-play-sports costume (not found at Walmart), learn how to stand like a man, keep our wrists up, our voices deep and emotions void.

All because of conservative legislation based primarily on Christian values. There. I said it.

Mississippi has a way of trying to dictate everyone's lives—from women's health-care legislation to bills like the Religious Freedom Restoration Act. Anyone who is not a heterosexual white male with an American flag pinned on his severely dry-cleaned suit is not welcome. I do not feel welcome in Mississippi. Period.

I won't feel welcome until conservative Christians slow their roll, have a seat, take a deep breath, sip some sweet tea and rethink their actions. Come on, guys, really? Sometimes I find myself wanting to scream "REALLY?!" as loud as possible.

Even though cities throughout the state are creating nondiscrimination resolutions, no one is doing anything to ensure nondiscrimination. No one is putting emphasis on progressing. We are still stuck.

Zachary Orsborn is a junior at Mississippi State University, a student reporter for the Starkville Free Press and the multimedia editor of The Reflector at MSU.