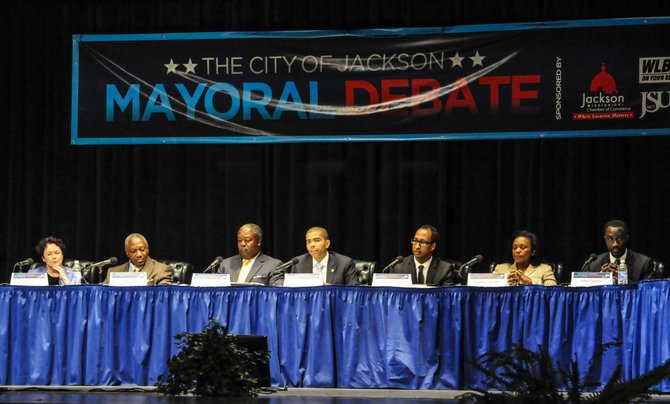 In at least the fourth mayoral debate of the short campaign season, held last night and hosted by WLBT-TV and Jackson State University, several of the candidates showed that they are solidifying their positions on a number of issues. Photo by Trip Burns. 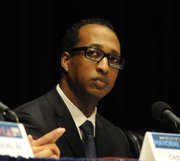 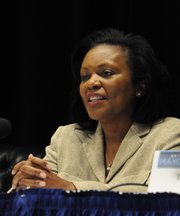 Ten days out from the special election that will determine the next mayor of Jackson, the top candidates are honing in on the key ideas they'll sell to capital city voters casting ballots April 8.

In at least the fourth mayoral debate of the short campaign season, held last night and hosted by WLBT-TV and Jackson State University, several of the candidates showed that they are solidifying their positions on a number of issues.

In many of his responses, Ward 6 Councilman Tony Yarber—a former principal and self-described "education man"—brought up problems facing the Jackson Public School system.

"We need a workforce we can laud when we talk to developers," Yarber said during a discussion about crime.

Yarber acknowledged that crime results from poverty, but added that poverty is the result of bad education. Yarber is playing on his background as a former educator and founding member of Alignment Jackson, which he said represents a "marriage" between JPS and the city, as the central component of his candidacy.

During his debate performances, the junior Lumumba is walking a fine line between defining himself as a leader and painting himself as the continuation of his father's legacy, which includes working as "the people's attorney" who takes on difficult defense cases, often on a pro bono basis.

Lumumba agreed that crime exists in Jackson, but also noted that there is plenty of crime on the docket when he appears in Madison County courts as well.

Ward 2 Councilman Melvin Priester Jr., a Stanford Law School grad, wants to bring a little Silicon Valley vibe to his administration by widening the use of technology in city recordkeeping as well as in crime fighting through digital-based predictive policing. Priester added that economic development in Jackson should not mirror other cities, but rather should incorporate the desires of Jacksonians.

Former Mayor Harvey Johnson Jr., who does mention his past experience as mayor in some radio ads, gave a strong defense of his record when other candidates hinted at failures of past administrations. Johnson explained the intricacies of serving as the chief-executive officer of a half-billion-dollar corporation, referring to the city's annual budget of approximately $500 million, and said he was the only candidate with such experience.

In a departure from other candidates, Johnson said he wants to talk to the business community about Medicaid expansion, which the Legislature has been cold toward but that Johnson said represents an economic development opportunity.

Ward 7 Councilwoman Margaret Barrett-Simon touted her 29 years serving on the city council learning the ins and outs of government, and pointed toward her racially diverse ward that includes Fondren and Belhaven and stretches into parts of south Jackson as center of most of the development that is taking place in the city.

Likewise, state Sen. John Horhn pointed to legislative proposals he authored that he says helped bring about the recent approval of the 1-percent sales tax, the construction of the Jackson State University Parkway and other projects.

Horhn said he would bring that experience to bear on city hall by working with JSU to build a venue for JSU football games and other entertainment functions.

I am disappointed that the media chooses for the public who it deems to be a viable candidate. I have followed the polls and realize that next mayor is likely to come from the seven candidates who were televised, nevertheless six other candidates qualified and the public should have the opportunity to vet all candidates. Not only is excluding certain candidates unfair to the public, it's unfair to the candidates. Although I support Yarber, I think Albert Wilson and Frances Smith should be heard.

Any of the above mentioned candidates could likely do a credible job as Mayor. They all seem qualified and sincere.

My real concern is how little conversation and action is devoted to addressing the economic issues and plans to increase local business, real estate values, and increasing the TAX BASE, not just the TAX RATE.

Hopefully, whoever wins will recognize the need for a comprehensive, significant, proactive economic development strategy; not just reacting to developer proposals on a project by project basis.

@Rodramon If you are worried about all candidates being heard why only mention those two?

You are right I should have named them all; however, I did mention the total number who are running. Sometimes the media will put candidates in categories. The two I named particularly have life experiences and the resumes to back up that they are serious....whatever that means.