Piling on the Poor 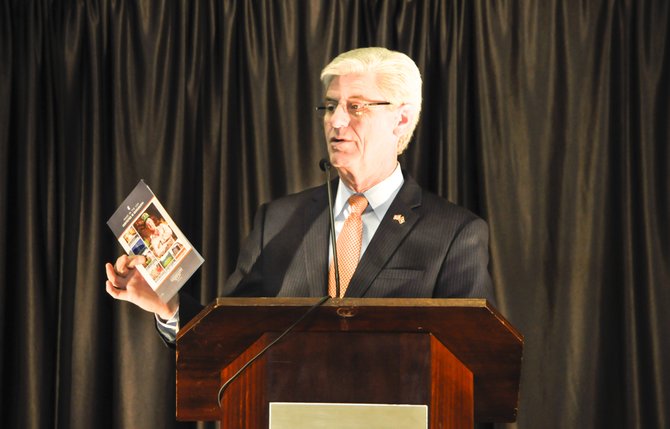 With the end of the session nearing, Gov. Phil Bryant has been busy signing legislation into law. Photo by Trip Burns.

Before the session started, fiscally conservative budget writers vowed to keep state spending to a minimum unless the economy improved and projected revenues went up.

This week, the Joint Legislative Budget Committee met and updated the forecast thanks to an unexpectedly strong national and state economy.

After a presentation from state economists, JLBC members increased the revenue estimate by $150 million for the 2014 fiscal year and added $98 million to next fiscal year's budget.

That means the legislative leadership will have a little more breathing room for a few items on their wish lists. Despite the increase, it's unlikely that lawmakers will expand the Medicaid program federal law allows. Legislators will not likely use any of the extra money to make headway toward fully funding the Mississippi Adequate Education Program. Since 2008, the Legislature has shorted Mississippi public schools $1.3 billion.

The most likely beneficiaries are teachers. Both Lt. Gov. Tate Reeves and House Speaker Philip Gunn want to give teachers pay increases, but the men have different views on the size of the raises and whether it should be based on merit or tied to test scores and other performance measures.

Reeves' Senate plan involves giving teachers a $1,500 raise this year and another $1,000 bump next year. In the third year of the plan, raises would be linked to how well teachers' students perform in the classroom.

The House and Senate have until Saturday, March 29, to hammer out a compromise between the two plans.

War on the Poor

Mississippi lawmakers have been hard at work to make lives harder on poor residents, who are the nation's poorest.

After months of working out the details, legislators agreed to terms on House Bill 585, which a task force of lawmakers, judges, prosecutors, and criminal-justice experts studied before the session began and developed recommendations they said would slash the amount the state spends incarcerating people by $266 million over a decade.

"We have worked hard to develop a research-based plan that is tough on crime while using resources wisely," Bryant said through a press release.

Before giving it final approval, lawmakers made having one kilogram of marijuana tantamount to drug trafficking, punishable by 10 to 40 years in prison.

Also, this week, Bryant quietly signed a bill that would involve random drug screening of families applying for Temporary Assistance for Needy Families.

Despite the bill being a centerpiece of the legislative agenda he laid at the beginning of the year, Bryant did not hold a public signing ceremony for the bill. Instead, his office released a statement in which he said the bill would help "adults who are trapped in a dependency lifestyle so they can better provide for their children."

A little more sunshine is coming to Mississippi government agencies thanks to a bill the Mississippi Center for Freedom of Information and the Mississippi Press Association backed. House Bill 928 amends the state's open-record laws to say that boards and agencies can charge no more than the cost of using the least-paid worker to fulfill a records request. Currently, agencies are permitted to charge for their attorneys to review public-records requests .

Officials with Jackson Public Schools are also applauding a measure that will allow the district to pay part-time workers twice per month. Until now, state law said JPS could pay employees such as bus drivers once per month, which became one of the reasons the drivers sent on strike earlier this year.