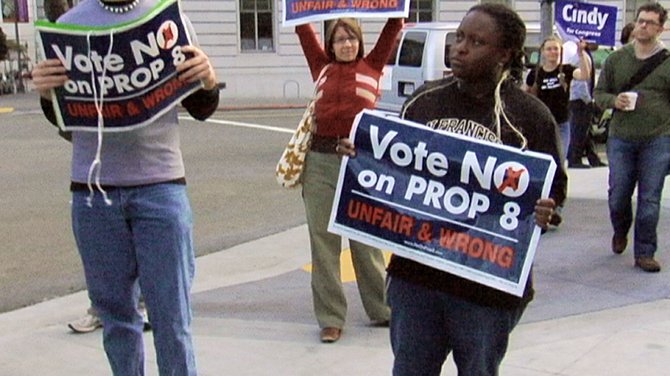 “The Campaign” covers some of Proposition 8’s rocky road in California.

"My own mother doesn't agree with what I'm fighting for," Holli Banks, a volunteer with the "No on Proposition 8" campaign, told a documentary filmmaker in 2008. "She said to me, 'The Bible clearly states that marriage is between a man and a woman.' My mother has been married five times."

Not only did the No-on-8ers run against people like Banks' mom, who clearly weren't as committed to the ideals of so-called traditional marriage as they professed, but they also encountered confusion and apathy within the ranks of their allies.

"The Campaign," directed and produced by Christie Herring, introduces us to the people working to stop California's Proposition 8, which would have eliminated the right of same-sex couples to marry in the nation's most populous state.

In one scene, a campaign volunteer tells the story of a gay man who assured the volunteer that he had voted early in favor of the proposition, erroneously believing the ballot initiative protected same-sex marriage.

The issue of gay marriage has a long, rocky history in both California and the nation. In 1970, Jack Baker and Michael McConnell sued to the U.S. Supreme Court after they were denied a marriage license in Minnesota. The high court declined to hear it, arguing that it lacked a federal constitutional question. In California, a 2000 referendum limited marriage to unions between men and women, but the state Supreme Court struck down that law in 2008, setting up a the showdown over Prop 8.

Not only were Prop 8 opponents outspent in the early going, a popular U.S. Sen. Barack Obama was a complicating factor because he claimed to support LGBTQ rights, but said at the time, he believed that marriage should happen only between a man and a woman (he reversed his position for his 2012 reelection campaign).

Proposition 8 was successful, but was essentially reversed in 2013. Same-sex marriages are currently legal in California.