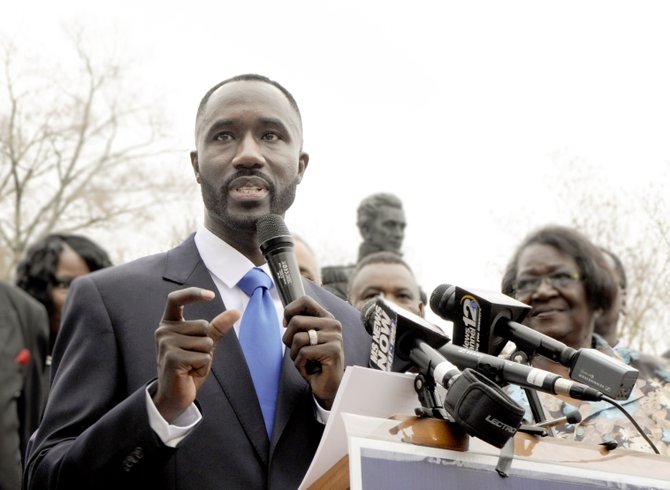 Councilman Tony Yarber is using robocalls in his campaign for mayor. His campaign has not yet revealed the content, though. Photo by Trip Burns.

When the robots begin calling, you know race has begun. Before she announced that she had indeed decided to seek the mayor's office, Ward 7 Councilwoman Margaret Barrett-Simon was already the target of automated robocalls.

"Our councilwoman is making a deal with a backroom politician," said one such call. "Call her and tell her to let Tony Yarber win the mayor's seat on his own. Please call our councilman, Margaret Barrett-Simon, and ask her not to make a deal with the powerbroker(s) that want to control the future of our city."

The suggestion is that Barrett-Simon got in the race to help Ward 6 Councilman Tony Yarber by pulling away votes from Yarber's foes in the race.

Pam Confer, Yarber's campaign communications director, did not address the allegation of a side deal between Yarber and Barrett-Simon, but did acknowledge that the campaign uses automatic calling services. "Robocalls allow Councilman Yarber to enter into the homes of Jacksonians and create a virtual conversation, where he can deliver his message," and ask for support, Confer wrote the Jackson Free Press in an email responding to a phone message.

Confer has not responded to follow-up calls from the Jackson Free Press to determine the content of his robocalls.

For her part, Barrett-Simon has pledged that her campaign would not engage in such tactics. "I would also like to call all of those who decide to enter the campaign to renounce the use of 'robocalls' and similar anonymous 'hit and run' methods," Barrett-Simon wrote on Facebook last week.

The robocalls are one aspect in the war of words that includes a battle over the radio airwaves, particularly on urban radio stations where several of the candidates are running advertisements.

Ward 6 Councilman Tony Yarber and Chokwe Antar Lumumba, the son of the late mayor, are both running campaign advertising on WRBJ 97.7 and WJMI 99.7, both of which target young listeners of modern hip-hop and R&B music.

Ward 2 Councilman Melvin Priester Jr. has reportedly begun airing a television ad. Sen. John Horhn also has a radio ad that he is airing on older and more conservative outlets, including a local blog that targets white conservatives.

The candidates' advertising choices reflect a desire to connect either directly with their bases or to shore up support among some groups where they aren't as strong.

For example, in addition to advertising on conservative media, during his announcement to seek the mayor's office last week, Horhn addressed head-on the issue of his November 2013 run-in with the Jackson Police Department. That encounter resulted in a charge of driving under the influence; later, an audio recording of the encounter suggested that Horhn attempted to use his influence in the Legislature to obtain leniency.

Horhn, who also ran for Jackson mayor in 2009, said he is used to opponents "throwing stones" at him, he said. "To be honest, I've probably thrown some of the biggest stones at myself for being in this situation," Horhn added during his announcement at Cade Courtyard.

Others pursuing the seat include former Mayor Harvey Johnson Jr. and Priester, who rose to the position of the city council president after Lumumba's death. Regina Quinn has also said she's in the race, but has not held an official announcement event.