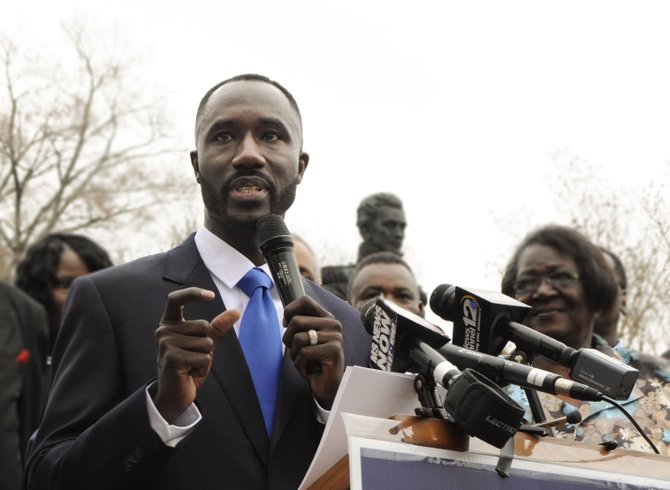 The first two individuals to formally announce that they will participate in the special election for mayor of Jackson are both veterans of city government—former Mayor Harvey Johnson Jr. and Ward 6 Councilman Tony Yarber.

Johnson, who finished in third place behind Jonathan Lee and just a shade behind Chokwe Lumumba in the 2013 Democratic primary race, launched his bid with a press conference Monday at the Smith Robertson Museum and Culture Center.

Johnson tied his own narrative as the city's first African American mayor to that of Smith Robertson, Jackson's first black alderman, with an announcement at the museum named in Robertson's honor. Johnson, known for being a bit of an infrastructure wonk, rattled off a long list of road repairs completed or started during his three terms as mayor.

A reporter asked Johnson why he was seeking another term when voters rejected him in 2009, when he lost to late Mayor Frank Melton, and 2013.

"If you're keeping score, they said no twice, but they said yes three times," Johnson quipped.

Johnson also addressed rumors that he pulled up stakes and settled in Madison—a rumor that surfaces every time he runs for office. Johnson said he lives in Jackson on Hallmark Drive and owns a barn where he keeps horses in Hinds County north of Clinton. He joked that someone must have seen him picking up building supplies for his barn and thought he was erecting a mansion in Madison.

This morning, Yarber held a press event outside City Hall before the 10 a.m. city council meeting.

Another councilman, Melvin Priester Jr. of Ward 2, will hold an announcement later this afternoon at his family's law office, when he is expected to say that he also wants the mayor's job. Ward 7 Councilwoman Margaret Barrett-Simon also indicated that she is contemplating a run, but she would wait until the end of the week to finalize her decision.

Socrates Garrett, a Jackson-based developer, supports Yarber's candidacy. "I've been in this town a long time, over 30 years, and I've watched mayors come and go, and this young man has all of the talents," Garrett told the Jackson Free Press.

Chokwe Antar Lumumba, the son of late Mayor Chokwe Lumumba, will also announce that he will run to succeed his father later this evening, at 5:30 pm at City Hall.

Regina Quinn, who finished fourth in last year's Democratic mayoral primary, confirmed to the Jackson Free Press this morning that she is running.

Quinn threw her support to Lumumba after last year's primary. Many of her supporters also got behind Lumumba; currently, several members of her campaign staff hold positions in city government. That sets up an interesting race against Antar Lumumba.

"I've worked so closely with Chokwe and, honestly when Antar said he wanted to run, I kind of felt like I'd be running against my nephew. But then I really started thinking about what Jackson needs and what I could bring to the table to get that done," Quinn, the only woman so far to definitively declare her candidacy, told the JFP this morning.

Quinn stressed that her candidacy does not mean she has doubts about the leadership potential of Chokwe Antar or anyone else who has declared their intentions. "I don't have doubts about anyone's leadership abilities, but what I have confidence in is what I bring to the table," she said.

State Sen. John Horhn, who ran for mayor in 2009, told the Associated Press that he would announce his candidacy on Wednesday.