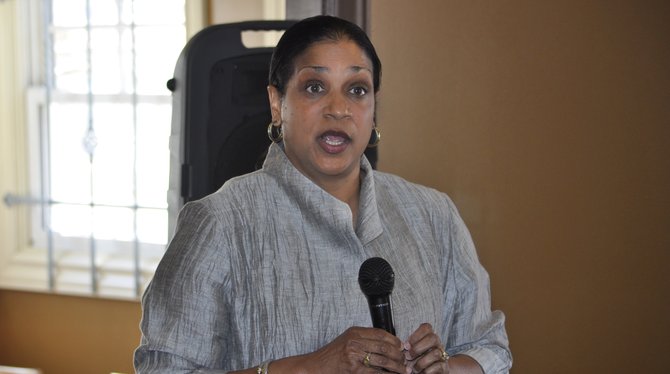 Jackson said she's open to the idea of converting the Midtown rental units into 15-year lease-purchases. Under such an agreement, tenants would lease the homes for 15 years and then receive the opportunity to purchase them. Photo by Trip Burns.

Sheila Jackson, executive director of the Jackson Housing Authority, says she is considering making the rental duplexes at its Midtown housing development available for purchase at some point in the future.

Jackson, who addressed Koinonia Coffee House's Friday Forum this morning, said she often fields questions about whether the 16 housing units, consisting of eight duplexes, are available for purchase. Jackson said she's open to the idea of converting the rental units into 15-year lease-purchases. Under such an agreement, tenants would lease the homes for 15 years and then receive the opportunity to purchase them.

JHA and city officials broke ground on the project with the help of the American Recovery and Reinvestment Act of 2009, which provided $3.49 million in financing. Jackson credits the development with stabilizing the Midtown neighborhood, which has helped it flourish as perhaps the city's hottest new arts district.

The Midtown project was the state's first eco-friendly, sustainable and affordable public housing development, featuring include energy-efficient amenities like thermal aluminum windows, Energy Star Appliances, instant gas water heaters, insulated crawl spaces and solar-panel energy generators. One of the home designs was specially developed for individuals with mobility problems and another unit is adapted for a hearing impaired person.

The energy-efficient design of the Midtown development is part of an emerging trend in public housing that focuses on keeping costs—of construction and maintenance for tenants—low while improving the design quality. Historically, public housing projects were shabbily thrown together with the cheapest available materials.

Today, public housing is more about improving residents' quality of life. Jackson said she empathizes with JHA's customers. A Clarksdale native from an affluent black family, Jackson said when she divorced her first husband, their son was five months old with a pulmonary disease that required several hospitalizations. She and her son moved 13 times in a span of two years, but her annual salary of $14,000 per year at the time was too much to draw government housing assistance, Jackson said this morning.

"I have compassion for who we serve," Jackson said.